Joe Hoffman on Statistical Analysis, and the Future of the Humanities

Last week I wrote about “Some Follow-up on the Statistical Analysis of C.S. Lewis’ Letters.” I posted it as a preliminary, a placeholder one might say, as I can’t dive deep into the spreadsheet-lined offices of the large complex of research rooms I have in my mind. I’m just too busy.

As often happens, though, there was some follow-up by readers of A Pilgrim in Narnia. One of these is Joe Hoffman, our local neighbourhood physicist, fencing-expert, gardening, blogging, IT expert. Joe’s thoughts often cut to the bone, and his work can expand that of others (like mine here in “That Hideous Graph”). As we are thinking about digital humanities work, we often hit limitations, as he talks about here. Joe notes that:

When scientists think of a question that we don’t have enough information to answer, the next step is to figure out an experiment that will give us the other things we need to know. In humanities, going and getting more information is a lot less likely.

I wanted readers to see this follow-up because, frankly, even with the limitations of data, we could be better at thinking about experiments to consider proposals about history, biography, and the worlds of letters and literature.

But there is more. Joe’s confidence for the 20th century is, of course, higher than the 12th. But he makes an intriguing prediction about the 21st century, where data mining will make digital humanities land on a far more scientific basis. 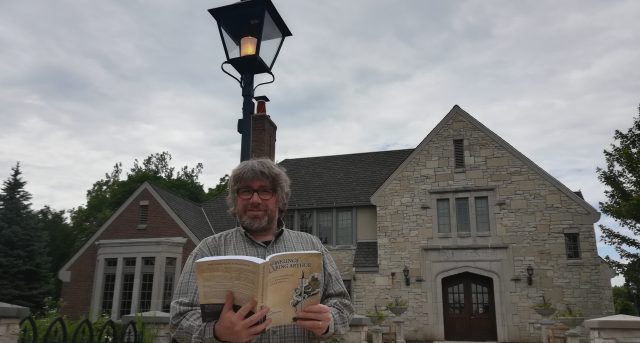 It is a great point–and one that I was limiting myself by. It has taken me years to read all of C.S. Lewis’ archives, even though most of it is lost. Imagine if it was all on a hard drive somewhere: Every email he wrote, every draft, all his bills, all his syllabi and outlines and false-starts. Social media posts and tax forms. To do lists and editorials he chose not to send. Spotify lists and eyeglass prescriptions and instructions for growing sprouts in the window. A letter of complaint to the inventor of the catheter. And so on. The data possibilities are massive, huge.

Joe is right that there would be great data analysis possibilities, but the job of historian and biographer could become nearly impossible in the fullest sense of the task. When I ask myself, “what will the humanities be about in the future?”, I include digital humanities. But do our lives as digital natives actually negate the future of what would be the normal carrying on of the humanities tradition? Does the “data sample” of a figure’s life become so big we can no longer tell a story? Intriguing questions.

I guess I know why Terry Pratchett destroyed all his files! And yet, I have a sense of deep loss. I would love to know more.

“A Pilgrim in Narnia” is a blog project in reading and talking about the work of C.S. Lewis, J.R.R. Tolkien, and the worlds they touched. As a "Faith, Fantasy, and Fiction" blog, we cover topics like children’s literature, apologetics and philosophy, myths and mythology, fantasy, theology, cultural critique, art and writing. This blog includes my thoughts as I read through Lewis and Tolkien and reflect on my own life and culture. In this sense, I am a Pilgrim in Narnia--or Middle Earth, or Fairyland. I am often peeking inside of wardrobes, looking for magic bricks in urban alleys, or rooting through yard sale boxes for old rings. If something here captures your imagination, leave a comment, “like” a post, share with your friends, or sign up to receive Narnian Pilgrim posts in your email box. Brenton Dickieson is a father, husband, friend, university lecturer, and freelance writer from Prince Edward Island, Canada. You can follow him on Twitter, @BrentonDana.
View all posts by Brenton Dickieson →
This entry was posted in Reflections and tagged archive, C.S. Lewis, Collected Letters of C.S. Lewis, Digital Humanities, digital natives, Inklings, Joe Hoffman, research. Bookmark the permalink.

6 Responses to Joe Hoffman on Statistical Analysis, and the Future of the Humanities