Some Follow-up on the Statistical Analysis of C.S. Lewis’ Letters

A few years ago I published “A Statistical Look at C.S. Lewis’ Letter Writing,” which is exactly what it sounds like. When I am not setting up lunch dates with Taylor Swift and hitting the books, I like to do a little nerd-number work. I just love spreadsheets, frankly. Besides the dizzying columns of numbers and the unlimited charts they (not me) can produce, I come to discern the truth about history or words or people in the numbers. I am not a magician when it comes to this data analysis. I have a friend who can look at a financial spreadsheet that is pages in length and immediately discern all the hidden secrets of a company. Me, the columns and graphics simply help me “see” my work in new ways.

This work–the cool kids are calling it Digital Humanities–has helped me in my work with C.S. Lewis to get a deeper understanding of his history and writing project, and works as a stable line when I want to suggest an experiment where we challenge what scholars assume (like here, where I want us to rethink the Narnia creation story). As C.S. Lewis is a pretty dynamic figure of the past, and as he wrote in a huge diversity of ways and about many different things, I want us to be pretty demanding about the evidence for thinking about him in new ways. Some data work can help with that. 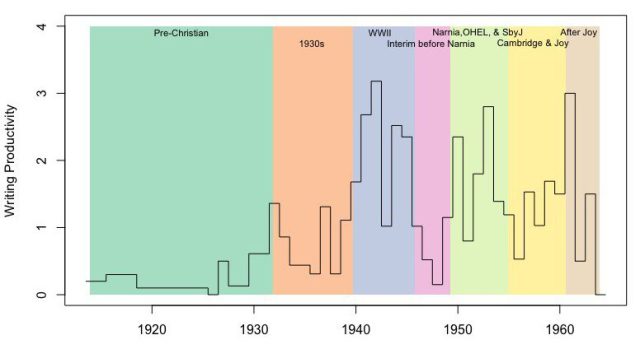 Hence the statistical analyses of letters. I did that work pretty quickly, and admitted back when I published this in the heady of 2013 that it was provisional. It didn’t change the world According to blog stats more people commented upon the piece than actually read it. But I still have the charts I made on my wall to give me visual clues about the periods of Lewis’ life.

Recently, two pieces have emerged that works as a correction of my stats work in Lewis letters. 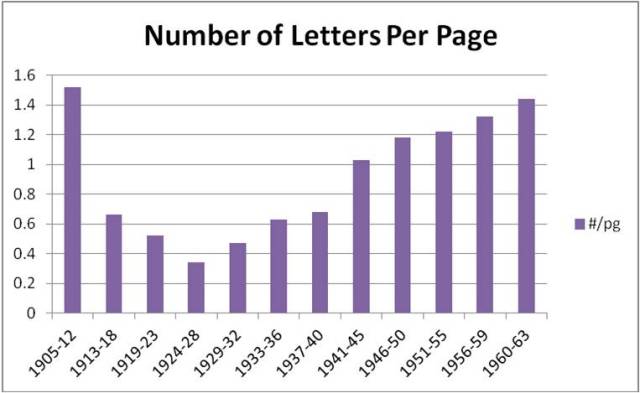 The first comes from a blogger named “klai.” I think “klai” is Dr. Samuli Kaislaniemi of the University of Helsinki, based on this previously unpublished letter by J.R.R. Tolkien to Arthur Ransome, which is pretty cool. A pingback popped up in my feed this week and I followed it back to this very intriguing blog-response to my work: “Counting correspondence, listing letters.” There kali spends a few lines offering a critique of my approach to letter counting. This is not a slam piece, but kali simply wants to use my work (which he is appreciative of) to test out our theory about these sorts of things. In particular, in offering an analysis of the 3,274 letters in three-volume letter collection by Walter Hooper, I am not giving a full picture. Instead, what I am looking at could be:

I do warn the reader that I am only doing #3, but kali just puts this so much better. I’m not sure that #1 or #2 is ever possible in historical studies, so we are always dealing with #3. But it is worth noting for kali wants to know to what extent the extant letters in the collection represent the original letter-writing project of Lewis. Dr. kali then goes on to do some work with Tolkien’s letter collection. This blog is actually four years old, and I’m surprised I never saw it before, so I’m linking it now.

The second piece of work is by Henry Hyunsuk Kim, Associate Professor of Sociology at Wheaton College. Dr. Kim has recently produced an article in VII: Journal of the Marion E. Wade Center, “C.S. Lewis: An Exploration through His Letters.” Though the article title is unremarkable, the work is worthy of note. Here is his abstract:

The impact of C.S. Lewis on literature, media, and theology has reached unparalleled status within certain Christian circles. Yet, how does one actually measure “influence” or “friendship”? It is problematic, not only in trying to operationalize “influence” and “friendship” but also because Lewis was a very private person, despite his public persona. Given these challenges, this paper explores Lewis’s “influence” and “friendship” through a series of specific questions. Rather than regurgitate the vast amount of extant works concerning Lewis this paper attempts to analyze Lewis’s letters via social network analysis or SNA. This is significant because to the best of my knowledge a respective study does not exist.

SNA, or Social Network Analysis, is super cool, and the editors of VII have chosen to link the paper for free even to nonsubscribers. Dr. Kim’s thesis is pretty intriguing, and this is a data-heavy piece. He does not connect back to my work at all, but suggests that I have over-counted the letters, basing his analysis on 3,218 letters.

I don’t have time to dialogue with either of these researchers as I am busy trying to pass a PhD. I need to recount the letters, rewrite my article to include the conclusions of kali and Dr. Kim, and see if I need to adjust my mental picture of Lewis’ work. That will have to wait, but I didn’t want you to have to wait. Enjoy these pieces and have fun in the digi-nerd-word-world.

“A Pilgrim in Narnia” is a blog project in reading and talking about the work of C.S. Lewis, J.R.R. Tolkien, and the worlds they touched. As a "Faith, Fantasy, and Fiction" blog, we cover topics like children’s literature, apologetics and philosophy, myths and mythology, fantasy, theology, cultural critique, art and writing. This blog includes my thoughts as I read through Lewis and Tolkien and reflect on my own life and culture. In this sense, I am a Pilgrim in Narnia--or Middle Earth, or Fairyland. I am often peeking inside of wardrobes, looking for magic bricks in urban alleys, or rooting through yard sale boxes for old rings. If something here captures your imagination, leave a comment, “like” a post, share with your friends, or sign up to receive Narnian Pilgrim posts in your email box. Brenton Dickieson is a father, husband, friend, university lecturer, and freelance writer from Prince Edward Island, Canada. You can follow him on Twitter, @BrentonDana.
View all posts by Brenton Dickieson →
This entry was posted in Reflections and tagged Arthur Ransome, C.S. Lewis, Collected Letters of C.S. Lewis, Digital Humanities, J.R.R. Tolkien, letters, Narnia, Taylor Swift, writing. Bookmark the permalink.

8 Responses to Some Follow-up on the Statistical Analysis of C.S. Lewis’ Letters