“This Year of the Atom”: A Poem on the Anniversary of Hiroshima, by Joy Davidman

Posted on August 6, 2019 by Brenton Dickieson 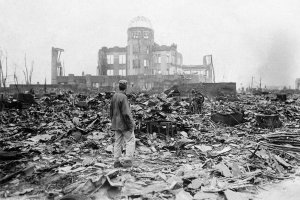 At 8:15 local time on Aug 6, 1945, American airship Enola Gay dropped an atomic bomb on Hiroshima, killing about 100,000 people, most of them civilians. On Aug 9th, the American military would reassert their ability to waste the countryside by dropping an atomic bomb on Nagasaki. These bombings led Japan to surrender on Aug 15th–a politically significant moment as the atomic bombs left Japan “rattling with darkness” both in frame and psyche. The next day, C.S. Lewis would release his critique of unrestrained commitment to systems of technological progress (technocracy), That Hideous Strength. The day after that, George Orwell published Animal Farm, the 20th century’s most famous criticism of political tyranny. 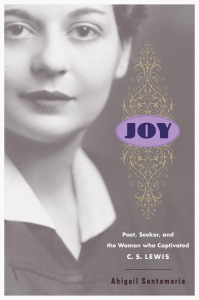 I never really know what to say on the anniversary of Hiroshima. I lived in Japan for a couple of formative years in my life, but never made the pilgrimage to the memorial site in Hiroshima. The event is full of conflict for me, as if humanity–America, specifically–broke a pact with humanity, and won the peace that closed WWII, perhaps the most invested, ideological, and inhumane event of human history. What can I say in a blog that drops at the same (local) time and on the same day as Hiroshima?

Instead of reflecting on the event, I’ve decided to share “atomic dread” from the American perspective, to share something about the internal conflict rather than geopolitics or human wasting. The poem below is by Joy Davidman, a struggling Marxist in a marriage that is starting to slide as her ideology becomes less sure for her. According to biographer Anna Santamaria, Joy’s worry about family illness, her postpartum depression, and her husband’s instability were woven into the fear and worry of the atomic era. This poem, which I find quite striking, makes for a very personal response to the bomb–a bomb that devasted Japanese bodies and shaped the soul of the nation.

But it also reminded me of how, as an overly imaginative child in the heightened nuclear anxieties before the collapse of the Soviet Union, “atomic dread” works its way deep into the soul. Though my perspective is better now, that dread is our inheritance. Our culture’s armageddonophilia continues and the clock is never far from midnight–most recently as America and Russia have allowed one of their nuclear treaties to expire. If you look at a globe, you might be interested to note what single country shares borders with the USSR and the USA. This, apparently, is the year of the atom too. 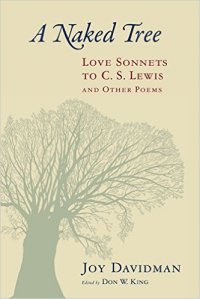 The Year of the Atom

This is it;
this is the sunless moment the black hole
deep in space where no stars set foot
and the earth goes voyaging and gets lost.
This is the cavern in the belly of time
rattling with darkness.

Here the babies lie
of the rotten womb now; corrupt, and die.
Who chokes us at birth? blows our light out?
breaks the mirror of our eyes across
and kicks us out of the back door of life?
Who says no to us?
Who but ourselves
lovesick for fingers that are let lie quiet
being fleshless; weeping with love
for lying still in the hidey-hole of ground
six feet deep, a paradise of sleep,
while the world rolls its hoop.

Sun come up;
revive, bloody and immaculate courage
of the live body. Reestablish us;
ordain, hearten, and reanimate us.
Let this wriggler, this progressor on his belly
extend the impossible joints of his legs and get up.
Remember it was done before, out of the slime.

We are stuck in the spiderweb of time,
juiceless, hung between this hour and next,
while the jaws go suck suck.

Sun come up;
let the web shrivel and the suspended men
walk on their legs across the living world.

This is it, this is nadir, the moment
wet and black at the bottom of the world
before the rotation lifts the ocean over the horizon
bright, painted with brightness,
wearing light, heartbreaking light.

The light is quiet.
The dry bones lift themselves out of the bottomless ditch,
assemble into man and go to get their breakfast.

“A Pilgrim in Narnia” is a blog project in reading and talking about the work of C.S. Lewis, J.R.R. Tolkien, and the worlds they touched. As a "Faith, Fantasy, and Fiction" blog, we cover topics like children’s literature, apologetics and philosophy, myths and mythology, fantasy, theology, cultural critique, art and writing. This blog includes my thoughts as I read through Lewis and Tolkien and reflect on my own life and culture. In this sense, I am a Pilgrim in Narnia--or Middle Earth, or Fairyland. I am often peeking inside of wardrobes, looking for magic bricks in urban alleys, or rooting through yard sale boxes for old rings. If something here captures your imagination, leave a comment, “like” a post, share with your friends, or sign up to receive Narnian Pilgrim posts in your email box. Brenton Dickieson is a father, husband, friend, university lecturer, and freelance writer from Prince Edward Island, Canada. You can follow him on Twitter, @BrentonDana.
View all posts by Brenton Dickieson →
This entry was posted in Reflections and tagged A Naked Tree, American politics, Animal Farm, Anna Santamaria, Atomic Bomb, C.S. Lewis, George Orwell, Hiroshima, Japan, Joy Davidman, Nagasaki, That Hideous Strength, war, WWII. Bookmark the permalink.

7 Responses to “This Year of the Atom”: A Poem on the Anniversary of Hiroshima, by Joy Davidman