The Lion, the Witch and the Wardrobe is the UK’s Favourite Book

Posted on August 9, 2019 by Brenton Dickieson 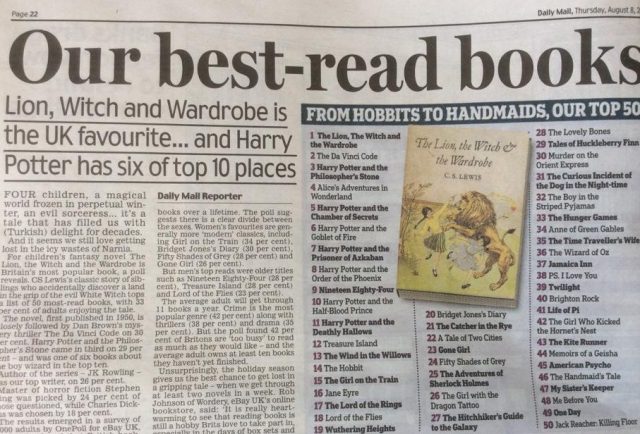 According to a OnePoll survey of 2,000 UK adults, The Lion, the Witch and the Wardrobe is Britain’s most popular book. It is an intriguing find, but not inconsistent with other surveys and with research by people like Stephanie Derrick (see here). The top 50 list as a whole is pretty intriguing. Six of the seven Harry Potter books are in the top 10, with Harry Potter and the Philosopher’s Stone as the #3 book and J.K. Rowling as the top writer. The list is very film-adaptation driven, which is hardly surprising given the budgets–and occasionally the linked quality–of bestseller adaptations.

There are some surprises. That The Da Vinci Code makes #2 is a little disheartening given it is just an okay book (and a terrible movie with some beautiful parts). I don’t think in North America you would find as many 19th century books by authors like Arthur Conan Doyle, Robert Louis Stevenson, Charlotte Brontë, Emily Brontë, and Charles Dickens–also one of the UK’s favourite authors, a century and a half on. I’m surprised that The Hobbit and The Lord of the Rings aren’t higher, but I struggle living in a world where people prefer Fifty Shades of Grey to Sherlock Holmes, Douglas Adams, The Hunger Games, or the great Candian books: Anne of Green Gables, Life of Pi, or The Handmaid’s Tale. Even Twilight is better, but no one asked me.

Intriguingly, The Daily Mail reports that Stephen King is a favourite author, though no book made the top 50. And women ten to read newer hot books while men read older titles. Crime is the most popular genre (but are those books on the list?), and Brits are only reading about 11 books a year, and wish they could read more. Still, it’s pleasing to see that C.S. Lewis’ Narnia is still loved, almost 70 years later.

“A Pilgrim in Narnia” is a blog project in reading and talking about the work of C.S. Lewis, J.R.R. Tolkien, and the worlds they touched. As a "Faith, Fantasy, and Fiction" blog, we cover topics like children’s literature, apologetics and philosophy, myths and mythology, fantasy, theology, cultural critique, art and writing. This blog includes my thoughts as I read through Lewis and Tolkien and reflect on my own life and culture. In this sense, I am a Pilgrim in Narnia--or Middle Earth, or Fairyland. I am often peeking inside of wardrobes, looking for magic bricks in urban alleys, or rooting through yard sale boxes for old rings. If something here captures your imagination, leave a comment, “like” a post, share with your friends, or sign up to receive Narnian Pilgrim posts in your email box. Brenton Dickieson is a father, husband, friend, university lecturer, and freelance writer from Prince Edward Island, Canada. You can follow him on Twitter, @BrentonDana.
View all posts by Brenton Dickieson →
This entry was posted in Reflections and tagged Anne of Green Gables, Arthur Conan Doyle, C.S. Lewis, Charles Dickens, Charlotte Brontë, Emily Bronte, Harry Potter, Harry Potter and the Philosopher's Stone, Life of Pi, lion the witch and the wardrobe, Robert Louis Stevenson, Stephen King, The Da Vinci Code, The Handmaid's Tale, The Hobbit, The Lion, The Lord of the Rings. Bookmark the permalink.

39 Responses to The Lion, the Witch and the Wardrobe is the UK’s Favourite Book