The Grand Miracle, Or Easter in Everyday Life with C.S. Lewis (75th Anniversary)

Artwork at St. Jude on the Hill, London

On this Holy week near the close of WWII, C.S. Lewis preached a sermon called “The Grand Miracle” at St. Jude on the Hill Church in London. The talk was published two weeks later in The Guardian–following the last episode of The Great Divorce in the same newspaper by just two weeks. This sermon was one of a number of famous sermons and lectures Lewis gave during WWII, many of which were collected in The Weight of Glory (1949, also known as Transpositions, and Other Addresses).

“The Grand Miracle,” however, isn’t in that volume, probably because it is part of C.S. Lewis’ “Miracles” phase. Through a series of 1941-45 articles, letters to the editor, essays, discussions at the Oxford Socratic club, and sermons, Lewis’ book Miracles grew into full form in 1947. “The Grand Miracle” sits outside the rest of Miracles in terms of its tone, lacking the clear-headed logical steps that represent the rest of the book. However, it is central to the narrative flow of Miracles, and continues to resonate as one of C.S. Lewis’ most important short pieces, and is published in God in the Dock.

St. Jude on the Hill, London

“The Grand Miracle” is a sermon about the incarnation, the in-fleshness of God in Jesus, the embodiment of the Creator within creation.

In a sermon that might have taken 20 or 25 minutes to deliver, Lewis talked of the unique event of the space-less and time-less God entering history–taking up space and time as a fleeting cloak of protection against the brokenness of human being–and human beings–in the universe.

You might be surprised, then, as we celebrate the resurrection this weekend, that I am–that Lewis was–pointing us toward the incarnation. Why are we talking about Christmas at Easter?

Worship at St. Jude on the Hill

That is partly answered by saying, “because we also talk about Easter at Christmas.” Even Good Friday, in all its horror, is part of the Christmas meditation, the bits of red in the green decorations of the Christmas season. But the reason is deeper than this. In “The Grand Miracle,” Lewis talks about the descent of God in our world, like a diver pushing down to the depths to retrieve something from the damp, murky bottom of the riverbed. But in descent there is also ascent–resurrection, coming back up for air, reaching again for air and sky and human spaces. The seed enters the ground in Spring. There it dies, and rots. But that rot feeds the birth of new life. Descent and ascent, you go down to come up.

For Lewis, the logic of death and resurrection is in all parts of life, so the incarnation is really just the first step in the great journey of Holy Week. Christmas and Easter are connected in a single movement. 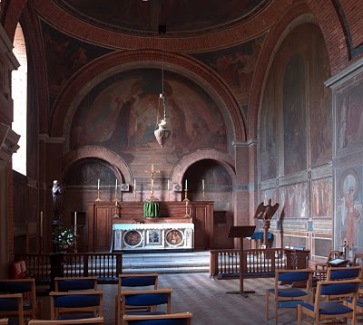 Our Lady Chapel St. Jude on the Hill

If we look further into C.S. Lewis’ work, though, we see that The Grand Miracle is not just about Christ. The cycle of death and life is not just prefiguring the gospel story, but the story of how to live the Christian life. As Christians, we die to self, and then are resurrected to new life. Baptism pictures this: death to a watery grave, all of life distorted through the lid of the water, the body tightening against the instincts of life when breath is taken away, and then release as we erupt into new life. C.S. Lewis’ theology is always spiritual theology. Aslan does not rise from his self-sacrifice merely because Christ did; Aslan arises from humiliation because we all do.

At Easter, we meditate on this new life: the giving way of Winter death to Spring life, the harrowing of hell and the emptying of all tombs, and the great promise of every Christian life. Even now, when we celebrate throughout the world in our own livingrooms and kitchen tables, separated in flesh but united in spirit. “The Grand Miracle” is an Easter meditation meant to draw us into communion with Christians across time and space who say, “Christ is Risen! He is risen indeed!”

“A Pilgrim in Narnia” is a blog project in reading and talking about the work of C.S. Lewis, J.R.R. Tolkien, and the worlds they touched. As a "Faith, Fantasy, and Fiction" blog, we cover topics like children’s literature, apologetics and philosophy, myths and mythology, fantasy, theology, cultural critique, art and writing. This blog includes my thoughts as I read through Lewis and Tolkien and reflect on my own life and culture. In this sense, I am a Pilgrim in Narnia--or Middle Earth, or Fairyland. I am often peeking inside of wardrobes, looking for magic bricks in urban alleys, or rooting through yard sale boxes for old rings. If something here captures your imagination, leave a comment, “like” a post, share with your friends, or sign up to receive Narnian Pilgrim posts in your email box. Brenton Dickieson is a father, husband, friend, university lecturer, and freelance writer from Prince Edward Island, Canada. You can follow him on Twitter, @BrentonDana.
View all posts by Brenton Dickieson →
This entry was posted in Reflections, Thoughtful Essays and tagged Christmas, dive, Easter, Galatians 2:20, Miracles, self-death, spiritual theology, St. Jude on the Hill, surrender, The Grand Miracle, The Great Divorce, The Guardian, theology. Bookmark the permalink.

10 Responses to The Grand Miracle, Or Easter in Everyday Life with C.S. Lewis (75th Anniversary)