My Paper, “A Cosmic Shift in The Screwtape Letters,” Published in Mythlore

Posted on October 19, 2020 by Brenton Dickieson

My Dear Friends, I am pleased to announce the publication of my paper “A Cosmic Shift in The Screwtape Letters.” This paper is the close-reading analysis of the “The Unpublished Preface to C.S. Lewis’ The Screwtape Letters.” Many readers will know–and others will discover to their delight and challenge–the 31 letters written from a senior demon to a junior tempter that C.S. Lewis published in The Guardian throughout 1941. I was able to uncover and publish a handwritten preface that C.S. Lewis wrote in July 1941 when his publisher, Geoffrey Bles, began pulling together for book publication. You can find that original publication in Notes & Queries, vol. 60, no. 2, 2013, pp. 296-298.

If someone picked up the Anglican weekly, The Guardian, looking for Christian encouragement, The Screwtape Letters begin in a shocking way:

I note what you say about guiding our patient’s reading and taking care that he sees a good deal of his materialist friend. But are you not being a trifle naïf? It sounds as if you supposed that argument was the way to keep him out of the Enemy’s clutches.

Who is Screwtape? Who is Wormwood? Why is Wormwood being commended for encouraging connections with materials (atheists? naturalist? worldly people?) and rebuked using argument as a foundation for action? It is an extreme use of in medias res, “beginning in the middle.” I have looked in archives and read through the letters to the editor in The Guardian, and cannot confirm the legend. But rumour has it that one of the subscribers to The Guardian cancelled his subscription because The Screwtape Letters were “positively diabolical.” Well, yes. That’s precisely the point! Hence the need of an introduction to the letters, a preface.

And in doing so, Lewis followed the long tradition of epistolary fiction–novels written as letters, diary entries, records, and the like. It isn’t that Lewis wrote these Screwtapian letters; rather, as he says in the preface published in your copy of The Screwtape Letters:

“I have no intention of explaining how the correspondence which I now offer to the public fell into my hands.”

What is intriguing about the handwritten preface, is that Lewis makes a link between Screwtape and his Ransom book–Out of the Silent Planet from 1938 and Perelandra, which he was writing at this time. This is the first sentence of the “Ransom Preface,” as I call it:

“Nothing will induce me to reveal how my friend Dr. Ransom got hold of the script which is translated in the following pages.”

It is a pretty exciting discovery and one that I have spent years working on. After publishing the Ransom Preface in Notes & Queries in 2013, I travelled to Mythcon at Wheaton College in Norton, MA, to share my discovery and initial thoughts with the fantastic (in more ways than one!) community of myth-lovers and fantasy fans. In 2012, I presented my first academic paper on C.S. Lewis at the Lewis & Friends Colloquium at Taylor University (see more here). In 2016, I returned to Taylor with some further analysis, “When Screwtape Haunts in Eden: Testing the Possibilities of the Screwtape-Ransom Speculative Universe” (see more here and here). And most recently, I have teamed up to do some archival work with Charlie W. Starr–Lewis handwriting expert and the first person to note in print that a Ransom Preface even exists. Charlie and I did some work on what we think to be the “Archangel Fragment,” Lewis’ single attempt to answer Screwtape with letters of angelic advice. You should be able to see bits of our paper, “The Archangel Fragment and C.S. LEwis’s World-Building Project” here, but you can order a copy of on Amazon.

My newest paper, “A Cosmic Shift in The Screwtape Letters,” is the culmination of several years of doing analysis and then setting the project aside to rest. As my coming out ball was Mythcon, I am extremely pleased that my paper has been published in Mythcon’s peer-review journal, Mythlore. I have long admired Mythlore, which began as a high-end and creative society journal with the design sensibilities of a paste-and-print zine. Over the years, it has developed into one of the most pre-eminent journals in the field. 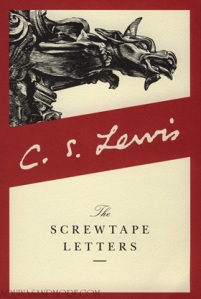 Here is the abstract of my paper:

A Cosmic Shift in The Screwtape Letters, by Brenton D.G. Dickieson

C.S. Lewis’s The Screwtape Letters rocketed him to fame during the second world war. Apart from a “toast” some years later, Lewis never added to his Screwtape letters. Most people read Screwtape’s dry, fragmented hellish speculative universe without much connection to the fictional worlds of his other novels. However, archival discoveries now reveal that Lewis made playful imaginative links that expand the scope of Screwtape’s speculative universe and link it to the world of the Ransom Trilogy, also called The Field of Arbol. By using unpublished and newly published manuscript evidence to supplement close readings of published texts, this paper reconsiders the extent of the Ransom fictional universe. Lewis’s imaginative experimentation with a broader speculative framework for the Field of Arbol has significance in several areas, including invented languages, angelology, the psychology of temptation, and the possible breadth of his myth-making project. This paper offers an experimental rereading of the Perelandra prologue as a sequel to The Screwtape Letters, cautiously testing the merits of a rereading based on archival research, and showing the advantages of considering Lewis’s WWII-era speculative fiction as a “Ransom Cycle”—a diverse, tentative, and experimental project of theological exploration and cultural criticism with cohesive themes and a coherent central vision.

Besides my family and church, who are everlong supports to me, I have a lot of people that I could thank. Those of you who are my teaching and research colleagues, who have connected to A Pilgrim in Narnia, and who are part of my digital scholarly community–you know who you are and that I am grateful for your help. Scholars who have read drafts or had conversations along the way include Crystal Hurd, Callum Beck, David C. Downing, Charlie Starr, Charles Huttar, Jonathan Himes, Dale Nelson, and William O’Flaherty, who has written C.S. Lewis Goes to Hell: A Companion and Study Guide to The Screwtape Letters. Joe Ricke has always been brilliant about giving me space to workshop my material, which I appreciate deeply. I am grateful to Walter Hooper for a chance to talk about the work in Oxford. A special thank you to Jennifer Rogers, who did some editing work in 2017 and 2018. Prominent praeternatural historian Richard Raiswell sat down with me to help me think about publication pathways and ways to approach the project–a meeting far more valuable than the grateful pint provided. Dr. Alana Vincent, my PhD supervisor, provided conversation along the way–including the advice to set this piece down for a couple of years as my thesis moved in a mother direction. And Sørina Higgins was particularly encouraging to me–first in the moments of discovery and early implications, and throughout the early stages of pulling this into a research project of value.

Thanks always to the professionals at the Bodleian Library in Oxford with its rich and interesting C.S. Lewis archive. Thank you to the Berg Collection at the New York City Public Library for access to the original manuscript of The Screwtape Letters. Thank you to Mary Robison and the folks at the Christoph Keller, Jr. Library at The General Theological Seminary in New York City for access to fragile original copies of The Guardian.

And, of course, to all the amazing folks at the Marion E. Wade Center, one of the most prominent Lewis archives in the world and home to the Ransom Preface. Laura Schmidt is ceaselessly helpful and extremely knowledgable, and generally recognized as an archival superhero across the land. Marjorie Lamp Mead, Crystal Downing, and David Downing, in their roles as directors at the Wade centre, have each taken specific opportunities to encourage and challenge me along the way. Similarly, as an editor for Seven at the Wade, Aaron Hill has been helpful in provoking my work along.

Finally, thanks to the entire Mythcon community and specifically Janet Brennan Croft, editor at Mythlore. For scholars of speculative and mythopoeic literature, the process of submission, review, and publication at Mythlore is quick, professional, and enjoyable–among the best I have encountered (though my experiences have been invariably good thus far). Janet is not only an engaging scholar in her own work, but has spent thousands of hours raising the quality of and increasing access to Mythlore: A Journal of J.R.R. Tolkien, C.S. Lewis, Charles Williams, and Mythopoeic Literature. As a reader, fan, critic, and scholar, I am grateful for your work!

You can purchase Mythlore here, and the free open-access copy of this paper is available here. You can check my conversation with the guys at Pints with Jack podcast about the Ransom Preface here.

“A Pilgrim in Narnia” is a blog project in reading and talking about the work of C.S. Lewis, J.R.R. Tolkien, and the worlds they touched. As a "Faith, Fantasy, and Fiction" blog, we cover topics like children’s literature, apologetics and philosophy, myths and mythology, fantasy, theology, cultural critique, art and writing. This blog includes my thoughts as I read through Lewis and Tolkien and reflect on my own life and culture. In this sense, I am a Pilgrim in Narnia--or Middle Earth, or Fairyland. I am often peeking inside of wardrobes, looking for magic bricks in urban alleys, or rooting through yard sale boxes for old rings. If something here captures your imagination, leave a comment, “like” a post, share with your friends, or sign up to receive Narnian Pilgrim posts in your email box. Brenton Dickieson is a father, husband, friend, university lecturer, and freelance writer from Prince Edward Island, Canada. You can follow him on Twitter, @BrentonDana.
View all posts by Brenton Dickieson →
This entry was posted in Original Research and tagged archival research, C.S. Lewis, Charlie Starr, epistolary fiction, Mythcon, Mythlore, Out of the Silent Planet, Perelandra, Ransom Cycle, The Archangel Fragment, The Cosmic Trilogy, The Screwtape Letters. Bookmark the permalink.

10 Responses to My Paper, “A Cosmic Shift in The Screwtape Letters,” Published in Mythlore