There is No Such Thing As Space

There is no such thing as Space.

I don’t just mean physically. I suppose, in the physical sense, there is no such thing as “space”: it is the non-stuff between stuff, at the very most. But even space in this sense is not complete nothingness, but contains particles of dust, radiation, some molecules of gasses, and leftover coffee cups from the space station drive thru. It isn’t completely empty.

But when I say “there is no such thing as Space,” I mean the idea of Space. The bigness of it, I mean. The emptiness. I use these simple words because, as scientists inform us, there are no words that can capture the infinite Lack within the vacuous expanse of what we call “the Universe.” We–and not just we, but all the collected matter in the universe–don’t approach a thimbleful of water in the ocean of Space. In the vast Nothingness of the spaces in between, we can, at most, be Next to Nothing.

This is the feeling I get, anyway, in the way that the story of Space filters down to plebeian Universe dwellers like myself. As an intelligent adult, I can follow the textbook conversation concerning the stuff and non-stuff of Space, but mostly I get the feeling that is left behind by the scientific narrative, at least as it is popularly told. And the narrative I get is one that emphasizes the infinite smallness of the fingers typing these words within the

incalculable bigness of applied e=mc2. One can’t help but feel, at least occasionally, that the relative smallness in size is also, in a non-Hortonian sense, also a smallness in value. What is Man, we might ask, that the miniscule bits of accidental Matter is mindful of him?

As I was reading C.S. Lewis’ first novel, an early science fiction piece called Out of the Silent Planet, I discovered that Lewis gave voice to this Space-created feeling. Like the narrator of H.G. Wells’ War of the Worlds, the protagonist of Silent Planet is a thinking man, a philologist named Dr. Ransom. In the early pages of the novel he is kidnapped by members of the social elite and smuggled into a spacecraft bound for Mars. As they venture a hundred thousand miles from Earth, Ransom knows that he should be anxious and frightened by the unknown plans of his captors. But the light of the sun dominates their spacecraft, and the nearness of it fills him with a kind of energy he had never experienced, even in his youth. Here are his initial thoughts:

But Ransom, as time wore on, became aware of another and more spiritual cause for his progressive lightening and exultation of heart.  A nightmare, long engendered in the modern mind by the mythology that follows in the wake of science, was falling off him.  He had read of ‘Space’: at the back of his thinking for years had lurked the dismal fancy of the black, cold vacuity, the utter deadness, which was supposed to separate the worlds.

The emptiness, the blackness, the coldness, the deadness: these are the images that, though they are true enough scientifically, left an imprint on the mythical imagination of his generation. Science doesn’t just tell us facts, but like all truth claims it weaves a narrative for us that performs the function that mythology used to perform. Though Ransom was part of the intelligentsia, he was unaware of the work of this narrative in his life until he was able to step outside of it (in quite a literal way).

He had not known how much it affected him till now – now that the very name ‘Space’ seemed a blasphemous libel for this empyrean ocean of radiance in which they swam.  He could not call it ‘dead’; he felt life pouring into him from it every moment.  How indeed should it be otherwise, since out of this ocean the worlds and all their life had come?  He had thought it barren: he saw now that it was the womb of worlds, whose blazing and innumerable offspring looked down nightly even upon the Earth with so many eyes – and here, with how many more!  No: Space was the wrong name. Older thinkers had been wiser when they named it simply the heavens – the heavens which declared the glory – the
‘happy climes that ly
Where day never shuts his eye
Up in the broad fields of the sky.’
He quoted Milton’s words to himself lovingly, at this time and often. 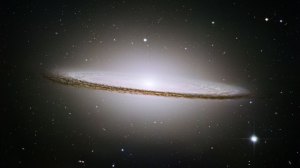 We see in this moment Lewis’ subversion of one mythology for another, the materialist myth for the Christian myth. In doing so, he is renaming Space. It is not complete emptiness, a lack of stuff in the spaces in between, but the Womb of the Worlds. This idea does not replace the scientific narrative:  he would agree with most scientists that human evolution and all other natural mysteries are the shrapnel of the Big Bang, the radical conclusion of that initial defining of the Stuff within Space. His subversion is, unlike the young earth creationists, not an attempt to subvert mainstream science, but to subvert the story that emerges from the implications of science. One can look at Outer Space as infinite Nothingness, or one can imagine it as a place of infinite creative Potential.

For Lewis, and for every theist, the aeons of infinite empty Space do not tell the story of ultimate reality, and certainly not the story of human insignificance or a distant god. As Ransom discovers, the empty spaces, the stuff and the non-stuff, all have significance in a created universe. It is this perspective that turns Space into the Heavens. In this sense, scientists are merely confirming what the poets, including John Milton, Dr. Suess, and King David, have told us all along, that there really is no such thing as Space.

“A Pilgrim in Narnia” is a blog project in reading and talking about the work of C.S. Lewis, J.R.R. Tolkien, and the worlds they touched. As a "Faith, Fantasy, and Fiction" blog, we cover topics like children’s literature, apologetics and philosophy, myths and mythology, fantasy, theology, cultural critique, art and writing. This blog includes my thoughts as I read through Lewis and Tolkien and reflect on my own life and culture. In this sense, I am a Pilgrim in Narnia--or Middle Earth, or Fairyland. I am often peeking inside of wardrobes, looking for magic bricks in urban alleys, or rooting through yard sale boxes for old rings. If something here captures your imagination, leave a comment, “like” a post, share with your friends, or sign up to receive Narnian Pilgrim posts in your email box. Brenton Dickieson is a father, husband, friend, university lecturer, and freelance writer from Prince Edward Island, Canada. You can follow him on Twitter, @BrentonDana.
View all posts by Brenton Dickieson →
This entry was posted in Memorable Quotes, Thoughtful Essays and tagged C.S. Lewis, literature, myth, Out of the Silent Planet, outer space, Ransom Trilogy, science, Science Fiction, Space Trilogy. Bookmark the permalink.

15 Responses to There is No Such Thing As Space