Posted on December 6, 2012 by Brenton Dickieson

At the close of the 20th century Stephen King wrote that if he were a different kind of writer,

“I might never have … gotten a letter from some helpful fundamentalist fellow who wants me to know that I’m going to burn in hell, where all my millions of dollars won’t buy me so much as a single drink of water” (Stephen King, On Writing, 188).

When talking about hell, that about sums it up, doesn’t it? The moralist—or prude, or bigot, or your Red State caricature of a seething sociopath—launches the threat of hell at unsuspecting folk as they pass by. To me, this approach has all the elegance of 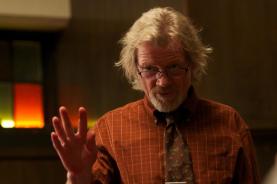 pantsing a rape victim in the street—a theological pantsing, of course, which justifies it for some.

While Pascal hedged his bets against hell, there have been critics of Christianity who find the doctrine of hell itself to be a central moral problem. Famously ironic, Voltaire said that Hell was:

“A cooking stove which heats the sacerdotal sauce-pan here below. It was founded on behalf of our priests, to the end that the latter may never be wanting in good cheer.”

In a less clever way, he lays out what for him is a central conflict:

“The good news that the gospel of the Christians came to announce to them is that their God is a God of wrath, that he has predestined the far greater number of them to hell-fire, that their happiness depends on their pious imbecility, their holy credulity, their sacred ravings, on the evil they do to one another through hatred of one another,…and on their antipathy for and persecution of all who do not agree with them or resemble them.” (Voltaire, “Philosophical Dictionary”).

A century before Stephen King, the logic of Voltaire’s critique was captured in the rhetorical force of anti-Christian preacher, Robert Ingersoll. Here he tells the story of a sermon based on The Parable of the Rich Man and Lazarus in Luke 16. It is an important parable—if indeed it is a parable—in the discussion of hell. Here Ingersoll finds it transformative.

It’s probably true that part of the shine on Ingersoll’s speech is that he is earning his penny to preach. And it’s also true that my students easily point out the logical flaws in his sermon, like his cultural experience of Christianity, his judgment of the whole based on the part, and his argument that the religious are bound to their religion by their upbringing, but apparently his alone is immune.

But critiques aside, here is the testimony of an intelligent man for whom the doctrine of hell—at least as it was preached in 19th century America—was reason itself to reject the faith. At the altar that day, one man cried out his hatred to God for sending people to an everlasting, conscious, place of non-restorative torture.

Bertrand Russell too addresses the problem of hell in “Why I am Not a Christian.” In Traveling Mercies, Anne Lamott tells of a favourite teacher who converted to Christianity. She speaks of her feeling of betrayal, and her response:

“We read the great atheists, studied their reasoning, especially Bertrand Russell’s essay ‘Why I am Not a Christian,’ which we basically memorized” (Anne Lamott, Traveling Mercies: Some Thoughts on Faith, 22).

I must admit that I struggle to see Russell’s impact. I find his argument thin and his tone arrogant. It lacks Ingersoll’s elegance, and I find it roughly

equivalent to the theological pantsing of the “Yer Gonna Burn!” crowd. Yet I continue to assign it because students get it, and it resonates with some at a deep level.

Perhaps the essay connects with some because it includes a simple argument about how Jesus was not the greatest of men, nor even the best. Hell is central to that argument.

“There is one very serious defect to my mind in Christ’s moral character, and that is that He believed in hell. I do not myself feel that any person who is really profoundly humane can believe in everlasting punishment. Christ certainly as depicted in the Gospels did believe in everlasting punishment, and one does find repeatedly a vindictive fury against those people who would not listen to His preaching — an attitude which is not uncommon with preachers, but which does somewhat detract from superlative excellence. You do not, for instance find that attitude in Socrates” (Bertrand Russell, “Why I am Not a Christian”).

“it is only in the reported observations of Jesus that we find any mention of hell and eternal punishment. The god of Moses would brusquely call for other tribes, including his favorite one, to suffer massacre and plague and even extirpation, but when the grave closed over his victims he was essentially finished with them unless he remembered to curse their succeeding progeny. Not until the advent of the Prince of Peace do we hear of the ghastly idea of further punishing and torturing the dead” (Christopher Hitchens, God is Not Great: How Religion Poisons Everything, 175-176).

While we can debate Russell, Ingersoll, Voltaire, and Hitchens about their individual presentations—none of them are really rigorous treatments—their rhetoric captures something that is true of at least my culture and my generation.

Pascal’s wager—that it is better to believe and risk being wrong than to disbelieve and risk the chance of going to hell—is distasteful to my generation. It is distasteful to me. My generation has no interest in eternity wagered on technicalities, nor the venomous presentation of the doctrine of hell—“good cheer” as Voltaire calls it. We are not moved by it. And it is difficult for us to see what true faith—or transformation of the cosmos, which is at the heart of the gospel—could occur based on a response to God founded

solely on fear. Indeed, we may suspect that fear-based religion would produce disciples who launch angry epithets at bestselling authors or picket the funerals of gay suicide victims.

So the value of these anti-Christian social commentators is that they bring forward for us poignantly the problem of hell—that a loving, redemptive God condemns those unbelievers or disbelievers to an everlasting, conscious torment for no reason except punishment—while capturing the leitmotif of a generation that disbelieves this doctrine. Any response we may have has two account for these twin streams of thought rooted deep in our culture`s worldview.

This is Part 3 of a Series on Hell throughout Fall 2012. This article leads to responses from C.S. Lewis and Peter Kreeft next week, and then Rob Bell and Francis Chan the following week. Part 1 of the Hell Series was “Wormwood Reborn? A Screwtapian Look at The Gates by John Connolly.” and Part 2 was Kreeft’s essay on Hell.

“A Pilgrim in Narnia” is a blog project in reading and talking about the work of C.S. Lewis, J.R.R. Tolkien, and the worlds they touched. As a "Faith, Fantasy, and Fiction" blog, we cover topics like children’s literature, apologetics and philosophy, myths and mythology, fantasy, theology, cultural critique, art and writing. This blog includes my thoughts as I read through Lewis and Tolkien and reflect on my own life and culture. In this sense, I am a Pilgrim in Narnia--or Middle Earth, or Fairyland. I am often peeking inside of wardrobes, looking for magic bricks in urban alleys, or rooting through yard sale boxes for old rings. If something here captures your imagination, leave a comment, “like” a post, share with your friends, or sign up to receive Narnian Pilgrim posts in your email box. Brenton Dickieson is a father, husband, friend, university lecturer, and freelance writer from Prince Edward Island, Canada. You can follow him on Twitter, @BrentonDana.
View all posts by Brenton Dickieson →
This entry was posted in Thoughtful Essays and tagged Anne Lamott, Bertrand Russell, Christopher Hitchens, hell, On Writing, pantsing, religion, Robert Ingersoll, Stephen King, The Moral Problem of Hell, theology. Bookmark the permalink.

23 Responses to Theological Pantsing, or the Moral Problem of Hell (Hell Series Part 3)