Today’s election of Cardinal Jorge Mario Bergoglio of Argentina as Pope Francis I has any of us with even the slimmest connection to Roman Catholicism tapping on our iPhones or opening up TweetDeck. It has been a wonderful clash of worlds this week: the solemn formality of cardinals filing reflectively into the Sistine Chapel while a hundred thousand iPad cameras tilt toward an improvised copper chimney. I even followed @ConclaveChimney on twitter: the building papal suspense from the perspective of the chimney itself. “Habemas Papem!” the chimney’s digitally projected self-image cried as it puffed out white smoke. “Habemas Papem!” a million people cried in St. Peter’s Square. We have a Pope!

The excitement put me to mind of C.S. Lewis’ relationship with Catholicism, which grew throughout his life. He grew up in Belfast, Ireland, in a period of hardening Catholic and Protestant identity. When he was almost ten years old, Lewis was sent to boarding school in England just a few weeks after his mother died. He never had good experiences at “public school,” and one of his first letters to his father betrays the boyhood impressions of an Ulster Protestant:

“I do not like church here at all because it is so frightfully high church that it might as well be Roman Catholic” (Oct 3, 1908).

He calls the church “Romish” in his boyhood diary, and later recollects the experience in his spiritual memoir, 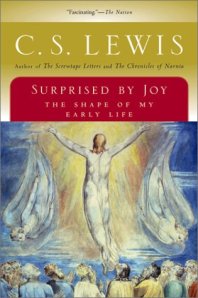 “On the conscious level I reacted strongly against its peculiarities—was I not an Ulster Protestant, and were not these unfamiliar rituals an essential part of the hated English atmosphere? Unconsciously, I suspect, the candles and incense, the vestments and the hymns sung on our knees, may have had a considerable, and opposite, effect on me. But I do not think they were the important thing. What really mattered was that I here heard the doctrines of Christianity (as distinct from general “uplift”) taught by men who obviously believed them” (C.S. Lewis, Surprised by Joy, 36).

Evidently, his anti-Catholicism softened. There were a number of reasons for this, not least, perhaps, the gradual passing of time and intellectual maturity. Part of Lewis’ growing appreciation for Catholicism may have been aesthetic. From a longer letter I quote here, he describes a walk just before he went to the front line in WWI:

“I struck a very pretty little village however: the houses are mostly clay walled, which gives them a lovely colour, and are very ramshackle. The roofs are all of old old tiles and there are lots of old stone crucifixes, with their little offerings of grass & beads & things on them. Catholic Christianity is certainly more picturesque than Puritanism” (Feb 21, 1918).

By the time C.S. Lewis is studying at Oxford, he has rejected Christianity but is complaining about “anti-Catholic propaganda” in the books he’s reading (letters in February 1920). Some of Lewis’ key literary influences are Catholic, including G.K. Chesteron, Dante, and J.R.R. Tolkien—a key figure in Lewis’ conversion to Christianity. Famously, Lewis said of Tolkien:

By the time he converts to theism (though not yet to Christianity), Lewis is able to appreciate Dante’s spiritual perspective:

“its blend of complexity and beauty is very like Catholic theology–wheel within wheel, but wheels of glory, and the One radiated through the Many” (letter to Arthur Greeves, January 1930.

Three years later, as a Christian convert writing to a student who had become a monk, he said,

“I have had a Catholic among my most intimate friends for many years and a great deal of our conversation has been religious. When all is said (and truly said) about the divisions of Christendom, there remains, by God’s mercy, an enormous common ground” (letter to Dom Bede Griffiths, Apr 4, 1934).

While there are occasional digs toward Roman Catholics in his letters, Lewis continued this ecumenical approach to his faith. When he began writing books defending and explaining his faith during WWII, he approached his subject as someone who is “merely Christian”—speaking only where the most Christians in most of history could agree with him. He sent the scripts for his famous BBC talks to Roman Catholic and Protestant clergy for their critique, including Griffiths.

While Lewis was open to fellowship with Roman Catholics and had Catholic ideas like purgatory, he never converted to Catholicism. Perhaps this note to H. Lymen Stebbins, an American Protestant considering a conversion to Catholicism, captures some of the reasons that Lewis himself never converted:

“The Roman Church where it differs from this universal tradition and specially from apostolic Xtianity [Christianity] I reject. Thus their theology about the B.V.M. [Blessed Virgin Mary] I reject because it seems utterly foreign to the New Testament: where indeed the words ‘Blessed is the womb that bore thee’ receive a rejoinder pointing in exactly the opposite direction. Their papalism seems equally foreign to the attitude of St Paul towards St Peter in the Epistles. The doctrine of Transubstantiation insists in defining in a way wh. the N.T. seems to me not to countenance. In a word, the whole set-up of modern Romanism seems to me to be as much a provincial or local variation from the central, ancient tradition as any particular Protestant sect is. I must therefore reject their claim: tho’ this does not mean rejecting particular things they say” (May 8, 1945)

Though some of these phrases seem like fighting words, he said them quite respectfully. Stebbins did, in fact, convert to Roman Catholicism. In general, Lewis avoided the controversies of the Christian church. In 1947 he began a conversation in Latin with Italian Catholic priest, Don Giovanni Calabria. In his Sep 6, 1947 letter, addressed to Calabria as “Reverend Father,” he shares his vision for conversation with Catholics:

“I am a layman, indeed the most lay of laymen, and least skilled in the deeper questions of sacred theology. I have tried to do the only thing that I think myself able to do: that is, to leave completely aside the subtler questions about which the Roman Church and Protestants disagree among themselves–things which are to be treated by bishops and learned men–and in my own books to expound, rather, those things which still, by God’s grace, after so many sins and errors, are shared by us.”

The common ground, that which was “Mere Christianity,” was most important to Lewis. As the world’s Catholics celebrate a day of Papal election, we have an opportunity to share a moment of common ground. While we view authority differently, in a sense, on this day, we all cry “Habemus Papem.”

“A Pilgrim in Narnia” is a blog project in reading and talking about the work of C.S. Lewis, J.R.R. Tolkien, and the worlds they touched. As a "Faith, Fantasy, and Fiction" blog, we cover topics like children’s literature, apologetics and philosophy, myths and mythology, fantasy, theology, cultural critique, art and writing. This blog includes my thoughts as I read through Lewis and Tolkien and reflect on my own life and culture. In this sense, I am a Pilgrim in Narnia--or Middle Earth, or Fairyland. I am often peeking inside of wardrobes, looking for magic bricks in urban alleys, or rooting through yard sale boxes for old rings. If something here captures your imagination, leave a comment, “like” a post, share with your friends, or sign up to receive Narnian Pilgrim posts in your email box. Brenton Dickieson is a father, husband, friend, university lecturer, and freelance writer from Prince Edward Island, Canada. You can follow him on Twitter, @BrentonDana.
View all posts by Brenton Dickieson →
This entry was posted in Lewis Biography, Reflections and tagged Bergoglio, C.S. Lewis, cardinal jorge mario bergoglio, Catholic, Christianity, Collected Letters of C.S. Lewis, ecumenical, ecumenism, Habemas Papem, Pope, Pope Francis, Protestant, religion, Roman Catholicism, Surprised by Joy. Bookmark the permalink.