Ruffling the Pages of The Hobbit: C.S. Lewis’ Original Review in TLS

Besides his own children, in the early days of The Hobbit, J.R.R. Tolkien’s biggest fan was C.S. Lewis. No one really knew what to do with Tolkien’s strange faerie tale just yet, and Tolkien was anxious about its value, but Lewis knew that The Hobbit was a game-changing book. Not only did Lewis encourage Tolkien to get it published, but when he was answering his own fan mail, he would recommend it to readers.

Lewis also took the step of putting his name out in public to support The Hobbit. Lewis wrote a review for the Times Literary Supplement on Oct 2, 1937, speaking to the importance of Tolkien’s project. It is valuable to read this review, now released in the TLS archive and in the Lewis collection, On Stories. This little review not only shows the support of one literary friend for another, but also the critical attention these Oxonian scholars paid to the important task of of world building, of mythopoiea.

The publishers claim that “The Hobbit,” though very unlike “Alice,” resembles it in being the work of a professor at play. A more important truth is that both belong to a very small class of books which have nothing in common save that each admits us to a world of its own – 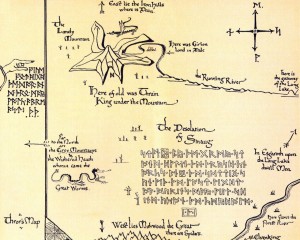 a world that seems to have been going on before we stumbled into it but which, once found by the right reader, becomes indispensable for him. Its place is with “Alice,” “Flatland,” “Phantastes,” “The Wind in the Willows.”

To define the world of “The Hobbit” is, of course, impossible, because it is new. You cannot anticipate it before you go there, as you cannot forget it once you have gone. The author’s admirable illustrations and maps of Mirkwood and Goblingate and Esgaroth give one an inkling – and so do the names of dwarf and dragon that catch our eyes as we first ruffle the pages.

But there are dwarfs and dwarfs, and no common recipe for children’s stories will give you creatures so rooted in their own soil and history as those of Professor Tolkien – who obviously knows much more about them than he needs for this tale. Still less will the common recipe prepare us for the curious shift from the matter-of-fact beginnings of his story (“hobbits are small people, smaller than dwarfs – and they have no beards – but very much larger than Lilliputians”) to the saga-like tone of the later chapters (“It is in my mind to ask what share of their inheritance you would have paid had you found the hoard unguarded”). You must read for yourself to find out how inevitable the change is and how it keeps pace with the hero’s journey. Though all is marvellous, nothing is arbitrary: all the inhabitants of Wilderland seem to have the same unquestionable right to their existence as those of our own world, though the fortunate child who meets them will have no notion – and his unlearned elders not much more – of the deep sources in our blood and tradition from which they spring.

For it must be understood that this is a children’s book only in the sense that the first of many readings can be undertaken in the nursery. “Alice” is read gravely by children and with laughter by grown-ups; “The Hobbit,” on the other hand, will be funniest to its youngest readers, and only years later, at a tenth or twentieth reading, will they begin to realize what deft scholarship and profound reflection have gone to make everything in it so ripe, so friendly, and in its own way so true. Prediction is dangerous: but “The Hobbit” may well prove a classic.

“A Pilgrim in Narnia” is a blog project in reading and talking about the work of C.S. Lewis, J.R.R. Tolkien, and the worlds they touched. As a "Faith, Fantasy, and Fiction" blog, we cover topics like children’s literature, apologetics and philosophy, myths and mythology, fantasy, theology, cultural critique, art and writing. This blog includes my thoughts as I read through Lewis and Tolkien and reflect on my own life and culture. In this sense, I am a Pilgrim in Narnia--or Middle Earth, or Fairyland. I am often peeking inside of wardrobes, looking for magic bricks in urban alleys, or rooting through yard sale boxes for old rings. If something here captures your imagination, leave a comment, “like” a post, share with your friends, or sign up to receive Narnian Pilgrim posts in your email box. Brenton Dickieson is a father, husband, friend, university lecturer, and freelance writer from Prince Edward Island, Canada. You can follow him on Twitter, @BrentonDana.
View all posts by Brenton Dickieson →
This entry was posted in Fictional Worlds, Lewis Biography and tagged Alice in Wonderland, C.S. Lewis, children's literature, faerie, fantasy, George MacDonald, imagination, Inklings, J.R.R. Tolkien, maps, The Hobbit, The Wind in the Willows, writing. Bookmark the permalink.

30 Responses to Ruffling the Pages of The Hobbit: C.S. Lewis’ Original Review in TLS