Nearly Despairing with Stephen King, or The First Part Hope

Posted on November 13, 2013 by Brenton Dickieson 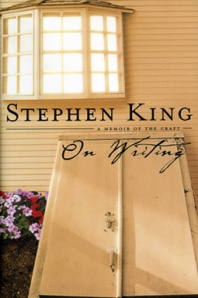 One of my yearly rituals is reading Stephen King’s On Writing. I am sure I am not alone when I say that it is this overly-autobiographical, ill-organized, life-interrupted writing narrative that absolutely transformed my approach to writing. No, more than that, it transformed my perspective of what it means to be a writer. There really is a critical difference.

I actually found On Writing in a bargain bin in downtown Vancouver–a series of cassettes, not the actual book. I had tried listening to them on a Walkman I borrowed–1980s anyone?–but found it awkward in my commute from the Downtown Eastside to the West End and back again. But the idea was intriguing enough that I purchased the book. Two years later, at another end of the continent, I finally read it. On New Years Day 2006, I sat down to write my first novel. I have been writing ever since.

I don’t know where I found the CDs—probably another bargain bin or used store—but CDs meant I could put On Writing on my Taiwanese brand MP3 player and walk around with Stephen King’s New England accent chatting life stories in my ear. In one of these audio rereadings, I was traveling the aisles of one of our large grocery stores when I suddenly burst into tears. To the stranger picking out Cheerios next to me, I must have looked a mess. But to any writer striving to be an author, to anyone

with dreams of seeing his heart’s stories find their way to bookstore shelves, I’m sure I looked absolutely normal. Here is that portion of Stephen King’s story that still, rereading a year later, tears at the bare skin that is my writer’s hope:

I wasn’t having much success with my own writing, either. Horror, science fiction, and crime stories in the men’s magazines were being replaced by increasingly graphic tales of sex. That was part of the trouble, but not all of it. The bigger deal was that, for the first time in my life, writing was hard. The problem was the teaching. I liked my coworkers and loved the kids—even the Beavis and Butt-Head types in Living with English could be interesting—but by most Friday afternoons I felt as if I’d spent the week with jumper cables clamped to my brain. If I ever came close to despairing about my future as a writer, it was then. I could see myself thirty years on, wearing the same shabby tweed coats with patches on the elbows, potbelly rolling over my Gap khakis from too much beer. I’d have a cigarette cough from too many packs of Pall Malls, thicker glasses, more dandruff, and in my desk drawer, six or seven unfinished manuscripts which I would take out and tinker with from time to time, usually when drunk. If asked what I did in my spare time, I’d tell people I was writing a book—what else does any self-respecting creative-writing teacher do with his or her spare time? And of course I’d lie to myself, telling myself there was still time, it wasn’t too late, there were novelists who didn’t get started until they were fifty, hell, even sixty. Probably plenty of them.

My wife made a crucial difference during those two years I spent teaching at Hampden (and washing sheets at New Franklin Laundry during the summer vacation). If she had suggested that the time I spent writing stories on the front porch of our rented house on Pond Street or in the laundry room of our rented trailer on Klatt Road in Hermon was wasted time, I think a lot of the heart would have gone out of me. Tabby never voiced a single doubt, however. Her support was a constant, one of the few good things I could take as a given. And whenever I see a first novel dedicated to a wife (or a husband), I smile and think, There’s someone who knows. Writing is a lonely job. Having someone who believes in you makes a lot of difference. They don’t have to make speeches. Just believing is usually enough.

I don’t smoke, so my future looked a little lazy hazy than King’s at this point. Though because I did not smoke, it would be a longer future—a longer future of failure if I didn’t get on with my task. But I too wear tweed, when I can. Unlike Stephen King, I love teaching, but the constant maintenance of poverty is an absolute drain on creativity in some seasons.

After this, King moved on to speak about how he conceived of Carrie, his breakout novel and recent film with Chloe Moretz and Julianne Moore. It is an interesting story, and I was lost in the tale as I wiped my cheeks and purchased cottage cheese. I should have know what was coming, and I was crying again at the checkout because of this:

The manuscript of Carrie went off to Doubleday, where I had made a friend named William Thompson. I pretty much forgot about it and moved on with my life, which at that time consisted of teaching school, raising kids, loving my wife, getting drunk on Friday afternoons, and writing stories.

My free period that semester was five, right after lunch. I usually spent it in the teachers’ room, grading papers and wishing I could stretch out on the couch and take a nap—in the early afternoon I have all the energy of a boa constrictor that’s just swallowed a goat. The intercom came on and Colleen Sites in the office asked if I was there. I said I was, and she asked me to come to the office. I had a phone call. My wife.

The walk from the teachers’ room in the lower wing to the main office seemed long even with classes in session and the halls mostly empty. I hurried, not quite running, my heart beating hard. Tabby would have had to dress the kids in their boots and jackets to use the neighbors’ phone, and I could think of only two reasons she might have done so. Either Joe or Naomi had fallen off the stoop and broken a leg, or I had sold Carrie.

My wife, sounding out of breath but deliriously happy, read me a telegram. Bill Thompson (who would later go on to discover a Mississippi scribbler named John Grisham) had sent it after trying to call and discovering the Kings no longer had a phone.
CONGRATULATIONS, it read. CARRIE OFFICIALLY A DOUBLEDAY BOOK. IS $2500 ADVANCE OKAY? THE FUTURE LIES AHEAD. LOVE, BILL

I don’t know where my tears came from. They were three parts despair, I know. But I suspect the first part of them were hope. It is a foolish hope, perhaps, but it is one that my wife—Kerry, and the spelling is important—has always supported.

Where will I be when I reread this book next year? My hope is that I will have received a telegram–or, more likely, an email–with a book offer. But I type this on one of the days when the first part of hope rises against the better part of despair.

“A Pilgrim in Narnia” is a blog project in reading and talking about the work of C.S. Lewis, J.R.R. Tolkien, and the worlds they touched. As a "Faith, Fantasy, and Fiction" blog, we cover topics like children’s literature, apologetics and philosophy, myths and mythology, fantasy, theology, cultural critique, art and writing. This blog includes my thoughts as I read through Lewis and Tolkien and reflect on my own life and culture. In this sense, I am a Pilgrim in Narnia--or Middle Earth, or Fairyland. I am often peeking inside of wardrobes, looking for magic bricks in urban alleys, or rooting through yard sale boxes for old rings. If something here captures your imagination, leave a comment, “like” a post, share with your friends, or sign up to receive Narnian Pilgrim posts in your email box. Brenton Dickieson is a father, husband, friend, university lecturer, and freelance writer from Prince Edward Island, Canada. You can follow him on Twitter, @BrentonDana.
View all posts by Brenton Dickieson →
This entry was posted in Memorable Quotes, Reflections and tagged books, Carrie, Chloe Moretz, john grisham, Julianne Moore, literature, On Writing, publishing, publishing dreams, Stephen King, writing. Bookmark the permalink.

29 Responses to Nearly Despairing with Stephen King, or The First Part Hope