Marching as to War: C.S. Lewis on His Way to the Front Line

Posted on November 11, 2013 by Brenton Dickieson

It is Remembrance Day here in Canada, Armistice Day in other parts of the Commonwealth. This is a re-post of something I wrote for last year. My mind still reals when I imagine how many great inventors, writers, scholars, healers, preachers, poets, and lovers we lost in the machine of war in the 20th century.

vol. 1), I was struck by the casual tone of his experience. On Remembrance Day in Canada, we consider the weight of the soldiers’ sacrifices for freedom. Often in tearful recollection, we hear the stories of those who have fought and died before us. Sometimes it is good, though, to hear the detached, reflective view–the stepping away from the moment to see the war in its stark horror through the eyes of a teenager who simply wants to get to university, and then reflecting on the moment years later.

As many young men did, Lewis entered WWI strategically, enlisting before he was conscripted, which gave him some options for placement and rank. He knew the danger of war–at least enough to be strategic about it. The words in his letters, though, are jovial at times.

“And now to tell you all the news. I am quite fairly comfortable here, we are in huts: but I have a room to myself with a fire in it & so am quite snug. The country is glorious – very wild & hilly & we are up a good height ourselves. From the camp I can enjoy a fine landscape – nice cosy little bits of green country with cottages & water & trees, then woodier hills rising at last into big, open moors that make up the horizon. It is especially lovely in the mists of early morning or of night” (c. Nov 28, 1917, 3d Somerset Light Infantry, Crown Hill, Plymouth).

Lewis then goes on to describe what he is reading, and makes a complaint 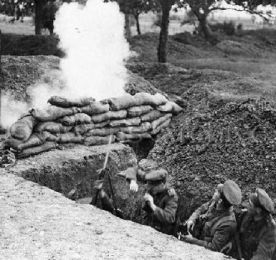 about the quality of bookshops in the region—not the things I’d be most concerned about if I was marching to “the war to end all wars.”

It isn’t that Lewis was completely unaware of what was facing him at the front line of the Great War. His infantry division, still in training in Britain, was abuzz with the idea they may be sent to Ireland to guard against Sinn Fein, which would “be a great deal pleasanter than in France” (Nov 5, 1917). I’m convinced, though, that he doesn’t fully understand what war is really like, what he is really marching toward.

At the beginning of February, 1918, Lewis came down with Trench Fever (Pyrexia) and was admitted to hospital. After three weeks in bed, Lewis shares with us the joy of his first great walk:

“The country round, so far as I could see in yesterday’s walk, quite comes up to expectation. I in vain tried to get onto a road leading to the cliffs and the sea, but, like the house in ‘Alice in Wonderland’ they evaded me. I struck a very pretty little village however: the houses are mostly clay walled, which gives them a lovely colour, and are very ramshackle. The roofs are all of old old tiles and there are lots of old stone crucifixes, with their little offerings of grass & beads & things on them. Catholic Christianity is certainly more picturesque than puritanism. But what pleased me most was an old granary with little kinds of arrow slits under the eaves through which you could see oats or corn or whatever it was projecting: it gave you the impression of the place being filled to bursting and was somehow very homely, snug and comfortable. There are also pidgeons all over the place, lodged in dovecots of the real old type that you see in pictures. Another nice things was the orchards, where you could look along the bright grass among the tree stems – very like our wood at home, just above and beyond the vicious dog. Wandering about the sleepy country reminded me of Bookham days – what a paradise of peace and quiet interests that was with our weekly letters so full of life & always following up some new idea” (Feb 21, 1918, No. 10 British Red Cross Hospital, Le Tréport, France)

Reading it, we get the sense of Lewis’ nostalgia for his old home, with its old marches through well worn paths with good friends. As it turns out, Lewis’

respite at Le Tréport would be a watershed experience of the war. Just two weeks later, he was back on the front line, and would look fondly back at “the old peaceful trench warfare I knew before Le Treport” (March 5, 1918). In his memoir, Surprised by Joy, Lewis would describe his war experience:

“The war itself has been so often described by those who saw more of it than I that I shall here say little about it. Until the great German attack came in the Spring we had a pretty quiet time. Even then they attacked not us but the Canadians on our right, merely “keeping us quiet” by pouring shells into our line about three a minute all day. I think it was that day I noticed how a greater terror overcomes a less: a mouse that I met (and a poor shivering mouse it was, as I was a poor shivering man) made no attempt to run from me. Through the winter, weariness and water were our chief enemies. I have gone to sleep marching and woken again and found myself marching still. One walked in the trenches in thigh gum boots with water above the knee; one remembers the icy stream welling up inside the boot when you punctured it on concealed barbed wire. Familiarity both with the very old and the very recent dead confirmed that view of corpses which had been formed the moment I saw my dead mother. I came to know and pity and reverence the ordinary man: particularly dear Sergeant Ayres, who was (1 suppose) killed by the same shell that wounded me. I was a futile officer (they gave commissions too easily then), a puppet moved about by him, and he turned this ridiculous and painful relation into something beautiful, became to me almost like a father. But for the rest, the war—the frights, the cold, the smell of H.E., the horribly smashed men still moving like half-crushed beetles, the sitting or standing corpses, the landscape of sheer earth without a blade of grass, the boots worn day and night till they seemed to grow to your feet—all this shows rarely and faintly in memory. It is too cut off from the rest of my experience and often seems to have happened to someone else. It is even in a way unimportant. One imaginative moment seems now to matter more than the realities that followed. It was the first bullet I heard—so far from me that it ‘whined’ like a journalist’s or a peacetime poet’s bullet. At that moment there was something not exactly like fear, much less like indifference: a little quavering signal that said ‘This is War. This is what Homer wrote about’” (185-186).

Although this paragraph is only a hint of what he experienced, it is detailed enough for us to see the change that occurred in the man during a single winter when he was twenty.

“A Pilgrim in Narnia” is a blog project in reading and talking about the work of C.S. Lewis, J.R.R. Tolkien, and the worlds they touched. As a "Faith, Fantasy, and Fiction" blog, we cover topics like children’s literature, apologetics and philosophy, myths and mythology, fantasy, theology, cultural critique, art and writing. This blog includes my thoughts as I read through Lewis and Tolkien and reflect on my own life and culture. In this sense, I am a Pilgrim in Narnia--or Middle Earth, or Fairyland. I am often peeking inside of wardrobes, looking for magic bricks in urban alleys, or rooting through yard sale boxes for old rings. If something here captures your imagination, leave a comment, “like” a post, share with your friends, or sign up to receive Narnian Pilgrim posts in your email box. Brenton Dickieson is a father, husband, friend, university lecturer, and freelance writer from Prince Edward Island, Canada. You can follow him on Twitter, @BrentonDana.
View all posts by Brenton Dickieson →
This entry was posted in Lewis Biography, Memorable Quotes and tagged Armistice Day, C.S. Lewis, Le Tréport, letters, Remebrance Day, somerset light infantry, Surprised by Joy, walking, war, war in the 20th century, wartime letters, WWI, WWII. Bookmark the permalink.

15 Responses to Marching as to War: C.S. Lewis on His Way to the Front Line