Another Awesome Day at The Wade

Two years ago I wrote a review of the Marion E. Wade Center. It is unusual, perhaps, to write a review about a library, but my 3-day visit in 2012 changed the course of my academic life. While my most recent trip didn’t shift any academic continents for me, it was once again a wonderful experience.

Housed at Wheaton College in the Southwest suburbs of Chicago, The Wade is the North American collection for seven key British authors of the late 19th and early 20th centuries, namely C.S. Lewis, Owen Barfield, J.R.R. Tolkien, G.K. Chesterton, George MacDonald, Dorothy L. Sayers, and Charles Williams. Taylor University in Upland, IN, has a nice C.S. Lewis archive, including the Edwin Brown collection and its helpful and competent staff (Pamela Long and Laura Constantine). And there are Inklings materials in other libraries, including the original handwritten Screwtape manuscript at The Berg in New York (which I worked with in 2012). But The Wade is the premium location for researchers and serious fans.

Carefully gathering archival, primary and secondary source materials for forty years under the Wade endowment, the Center grew out of the literary collection of Dr. Clyde S. Kilby, a C.S. Lewis correspondent and Wheaton English professor. Beginning with C.S. Lewis, the collection grew to include authoritative acquisitions of his influences (MacDonald and Chesterton) and his friends (Tolkien, Barfield, Sayers, and Williams)–historical and honourary members of the Inklings, an influential Oxford writing group around the WWII era. In 2012, visiting the Wade was a kind of literary pilgrimage; returning last week was a precious opportunity. 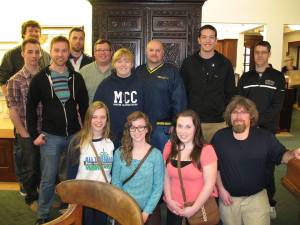 When I first visited in 2012, I was on the tail end of conferences in Waterloo, ON and Upland, IN. This time I was traveling with a group of students from Maritime Christian College (I’m the hobbit-sized fellow on the bottom right). It was a trip designed to be overwhelming. We filled their schedule with the Shedd Museum of Natural History, the Field Aquarium, the Art Institute of Chicago, the Magnificent Mile, the Lincoln Zoo, a White Sox game, and Chicago’s endless display of world-class architecture and miles of waterfront. Groups of students served the homeless in Uptown, attended a night of slam poetry at the Green Mill, and toured the Oriental Institute at the University of Chicago. There was so much we missed–Chicago has endless possibilities, doesn’t it?–but we did see the gargoyles at UofC, ate deep dish pizza, and attended an Urban Studies conversation with Dr. Gordon D. Venturella of Lincoln Christian University at, intriguingly, a Bloomingdales on Michigan Ave. Beyond overwhelming, it was like taking a sip from a fire hydrant.

To be perfectly honest, the team was stacked with Inklings readers to begin with. MCC Prof. Tom Marshall assigns students not only Narnia and The Hobbit, but has students explore Chesterton’s essays, MacDonald’s fantasies, Lewis’ Ransom Trilogy, and even Charles Williams, the oddest Inkling of all. So we were certainly not taking a student tour to the midwest without going to the Wade. 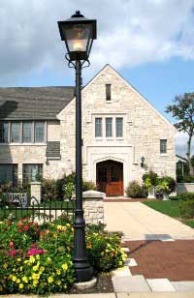 Always a pleasure, we drove our student in painfully-obtained rental cars through the olde American mainstreet community of Wheaton. On the edge of the campus, we view an absolutely perfect English cottage of brick, slate, and sandstone. Walking past a Narnian lamppost through a well-kept flower garden, I approached the large wooden doors and was struck with the idea I was walking up to the central library of Hobbiton or Dr. Ransom’s Cambridge archive. The architects picked the perfect structure to capture the nostalgia we readers have for the Oxford Inklings we like to read so much.

As always, I was greeted with courtesy. I sneaked into the reading room to get to work immediately, while archivist Laura Schmidt pulled out all the stops for our students. She gave a talk about the Wade’s resources, a tour of the Inklings museum, and introduced the C.S. Lewis collection, which included all of the Lewis letters they can find, binders of correspondence, nearly all editions of all of his work, original typed or handwritten manuscripts of much of his writing, a large portion of his original personal library, and hundreds of theses, dissertations, books, and journals dedicated to Lewis and his contemporaries. The bulk of resources is dizzying, and the students, normally boisterous and full of comments, were entirely hushed as they walked past the first editions in the reading room.

While not every student is drawn into reverent awe by dashes of dip pens across yellowing pages, Laura brought out some “treats” for our students, including a tour of crazy Space trilogy book covers, The Screwtape Letters as they appeared in The Guardian newspaper more than 70 years ago, the 1st British edition of The Screwtape Letters (which I also used), C.S. Lewis’s drawing of the demon Screwtape,  1st British editions of The Lion, The Witch, and the Wardrobe, an original Reepicheep drawing by original Narnian artist Pauline Baynes (from The Last Battle), and the famous LeFay Fragment–a manuscript filled with great Lewis ideas, including a false start to The Magician’s Nephew and ideas that worked themselves into Prince Caspian.

While students were enjoying their treats, I was furiously at work. I only had about 3.5 hours, and I had to make use of it the best I could. In the Clyde Kilby room a pile of research materials was waiting for me. I was given a large wooden table with banker lights and a comfortable chair to do my work. The reading room is a spacious, well-lit wing of the Wade, walled with glassed-in bookshelves. At the south end there is an atrium with lounging chairs, though, even this time, I never had a chance to lounge.

What defined my 2012 visit was stumbling upon some unpublished things connected to The Screwtape Letters (which I later published). Back then, I had saved my work on The Screwtape Letters manuscripts for the afternoon of the second day, a kind of delayed pleasure–not knowing how important that would be.

This time I jumped right in, working in original material on Screwtape and some of Lewis’ correspondence. Most of my work this time was fact-checking. When I returned from the Wade two years ago, I had in my mind that I had missed something on the first page of the Screwtape typescript. I dreamed that Lewis had included a Milton prescript to Screwtape that never made it to print. On Monday, I opened up the folder, and saw that I was right! It was a satisfying moment.

I then spent time with “Early Prose Joy,” C.S. Lewis’ earliest conversion narrative–told even before he had become a Christian, but after he had begun to believe in God. Andrew Lazo had painstakingly transcribed the account and published it in Seven (2013), and I found his transcription accurate. I was looking at the things that Lewis had scratched out and rewritten, and I wasn’t disappointed.

On that theme, I looked at some rejected pages of That Hideous Strength, which showed that Lewis was thinking about Tolkien’s work and connecting it with a third piece of work (I’m not sure what I’ll do with that transcription just yet). I did some fact checking on Sørina Higgins’ ground-breaking work on Charles Williams’ early play “The Chapel of the Thorn” (1912), and then looked at a page of notes that Lewis made when editing Out of the Silent Planet–almost illegible, but pretty cool. Finally, I looked at The Great Divorce, but ran out of time. The time was far too short. 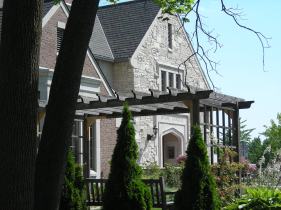 Unfortunately, I am a thirty hour drive from this amazing resource. So when circumstance and our school president allowed Prof. Marshall and I to return at lunchtime on Wednesday, we jumped at the opportunity. Really, I needed that time, and was able to tighten a lot of loose bolts from Monday’s work. I still didn’t have time to go through all of nine manuscript pages of The Great Divorce (which Lewis was writing almost 70 years ago today), but I was able to complete all my other tasks. I left the archive on Wednesday with dry eyes, a massive headache, and a large grin. It was a sublime experience.

The MCC Chicago 2014 trip will be for me in memory a series of overwhelming events. Once again I experienced the astounding generousity of spirit at The Wade. And once again I was simultaneously encouraged and baffled by the great resources that are available there for us. Now all that is left is the hard work of putting it together!

“A Pilgrim in Narnia” is a blog project in reading and talking about the work of C.S. Lewis, J.R.R. Tolkien, and the worlds they touched. As a "Faith, Fantasy, and Fiction" blog, we cover topics like children’s literature, apologetics and philosophy, myths and mythology, fantasy, theology, cultural critique, art and writing. This blog includes my thoughts as I read through Lewis and Tolkien and reflect on my own life and culture. In this sense, I am a Pilgrim in Narnia--or Middle Earth, or Fairyland. I am often peeking inside of wardrobes, looking for magic bricks in urban alleys, or rooting through yard sale boxes for old rings. If something here captures your imagination, leave a comment, “like” a post, share with your friends, or sign up to receive Narnian Pilgrim posts in your email box. Brenton Dickieson is a father, husband, friend, university lecturer, and freelance writer from Prince Edward Island, Canada. You can follow him on Twitter, @BrentonDana.
View all posts by Brenton Dickieson →
This entry was posted in Reflections, Reviews and tagged archive, books, C.S. Lewis, Chicago, fantasy, Inklings, J.R.R. Tolkien, literature, Marion E. Wade Center, The Screwtape Letters. Bookmark the permalink.

18 Responses to Another Awesome Day at The Wade