Truth be told, I am a false positive extrovert. At least at parties. Even when I know the people and place pretty well, I have great anxiety at breaking into conversation circles. But this was a faculty event, a room full of smart people with interesting stories. I took up courage in both hand and slid into a group.

I was immediately pointed out as the “religion” guy. Someone was working on a public health project, and was missing the religion element. I thought it was pretty bright of her to target faith perspective as a step in the process. As we were talking about how people live as religious people in the world today, another one of the profs piped in:

“There’s really no such thing as truth,” she said.

“That there is a truth claim,” I responded. She took the beat that I didn’t miss and thought about my answer. One thing I love about (good) academics is that they are in love with ideas. She tilted her head and looked back at me.

“That really is a truth claim,” she said. “I don’t know what to with that.”

“You have to change your whole worldview,” I answered, a little too quickly. We all laughed, and the moment moved on.

Now, before you throw up your hands in exasperation at another postmodern professor loose on campus with today’s young minds, I should note some things. While I don’t know this particular person perfectly well, I do know that she carries on research projects as if some ideas are better than others. She listens to people’s stories—both in her classroom and in her research—and gives them space to be heard. And she is a moral person, working as an activist to make people’s lives better.

She certainly believes in truth, and she lives that way.

So, why did she say she didn’t?

It could be that she is just another of those postmodern relativists. I think this kind of label—really an accusation by some—does more to confuse things than help them. Relativism is a philosophical approach that is both premodern and, in our culture, bound up with modernity. Moreover, postmodernism does not mean relativism. I could talk about what postmodernism means, but that would miss the point, right? This prof wasn’t speaking out of a life of study in this moment. She was saying what she thought she believed as a plate of bacon-wrapped scallops passed around the circle. The interesting question is this: Why hasn’t someone at the highest level of Western education worked out such a key problem of what it means to be human in the world?

At this point, some may jump in with a “kids these days” kind of answer. It is true that education has faltered. I am reading things now that people used to read in “the upper forms of school”—high school—and in the early years of college. But, after spending a lot of time this last three years studying British and Canadian students in the time before WWII, I don’t think this problem is new to our generation.

After all, how many of you had a lot of training in epistemology in grade 8? That’s what we are talking about here. “Epistemology” is asking the question, “how do we know things?”, and following up with, “how do we know that we know even that?” I have been secretly teaching my teen Sunday School class a course in epistemology for about three years, but for the most part, most of us wander through life without ever struggling with these essential questions. I would be surprised if we didn’t find that most scientists and researchers (and politicians and teachers and pastors) were not able to be clearer than my friend above.

I do think it is a profound concern that our leaders and educators are not more well-led and well-educated themselves. But there is a point hidden within this discussion that we must understand or we will miss a key moment in our culture today.

My academic friend said she didn’t believe in truth claims because something in her makes her feel like truth claims are bad.

So, what is that—that thing that is instinctive in our culture that truth claims themselves are bad?

It’s a big question—far beyond a bacon-wrapped scallop type of party or even this blog. It may well be unanswerable. Why does anything emerge as a “thing” in culture? How do zeitgeists develop? We may never know, but it certainly isn’t the first time I’ve heard this sort of sentiment. Something akin to it emerged from my reading of Madeleine L’Engle recently. I am a fan of L’Engle’s fiction, but have been struggling with her nonfiction books. I’m reading A Stone for a Pillow (2000), which has some lovely moments. But it also has some moments where her

faith perspective drifts into our culture’s lane. Here is one of them:

But it’s a question we need to ask, with courage, as we look at what is going on around us in the world, with wars in the name of religion accelerating all over the planet, each group claiming to represent The Truth, and occasionally proclaiming it with acts of terrorism (83).

As someone speaking in the last moments of the 20th century, L’Engle’s words close off a millennium defined by religious violence and a century defined by the threat of totalitarianism. Her book was still new when airplanes crashed into the Eastern seaboard, so her words are tinged with prophecy. 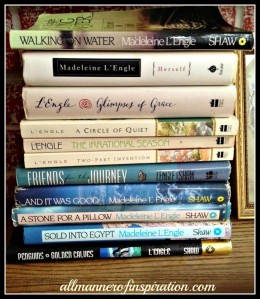 There is probably a philosophical argument to be made here. If I say that “X is absolutely true,” it could be that I am saying that all truth is bound up in my self. That really is a kind of kind of totalitarianism, though it need not lead to violence.

But that isn’t what we are saying when we say something is true. Some things that we say we know to be subjective truths:

But some things we say are absolute truth claims:

These objective claims are a collection of various kinds of truth claims (self-evident, epistemological, historical, philosophical, sociological, theological, and moral). And any one of them may be wrong. I cannot speak to Mathematics, but God may have been silent in Muhammad’s cave, Christian theology may be flawed, our social analysis might fail, and there may be situations where it is okay to kidnap children and enslave them. Right or wrong, these are absolute truth claims.

So do these claims do violence? It is absolutely possible that any one of them could lead to violence, and some are more prone to be used for violent means—Sociology, for example, has more potential than Math for those bent on violence. But that’s not the same thing. Hitler was Nietzschean, but Nietzsche didn’t cause or create Hitlerian totalitarianism. Marxist-Leninism is atheistic, but it is a logical leap to suggest that atheism will lead to the kind of atrocities that occurred in 20th century Russia.

And yet, the feeling remains.

I don’t know how to address that, really, except by the quiet reminder that as humans we are truth-telling people. Verily, I say unto you that we are truly culture bound. It may well be that we can know nothing absolutely, and these words are just the sound of wind in the trees. But granted that human conversation is meaningful, we need to remember that it is okay to say what we believe out loud. If we negate the other, or fail to see our blind spots, or turn our belief into violence, we have broken it.

And so, I will say it. I believe that 2+2=4 in all places of the universe. I believe that we are made in the image of God to be caretakers of creation. And I believe it is wrong to sell girls into slavery to make a statement. Some things are just wrong.

And unless we recover that cultural moment, we will always break the bank and bend space-time to search for a lost plane while we leave Nigeria’s with a poverty of well wishes.

“A Pilgrim in Narnia” is a blog project in reading and talking about the work of C.S. Lewis, J.R.R. Tolkien, and the worlds they touched. As a "Faith, Fantasy, and Fiction" blog, we cover topics like children’s literature, apologetics and philosophy, myths and mythology, fantasy, theology, cultural critique, art and writing. This blog includes my thoughts as I read through Lewis and Tolkien and reflect on my own life and culture. In this sense, I am a Pilgrim in Narnia--or Middle Earth, or Fairyland. I am often peeking inside of wardrobes, looking for magic bricks in urban alleys, or rooting through yard sale boxes for old rings. If something here captures your imagination, leave a comment, “like” a post, share with your friends, or sign up to receive Narnian Pilgrim posts in your email box. Brenton Dickieson is a father, husband, friend, university lecturer, and freelance writer from Prince Edward Island, Canada. You can follow him on Twitter, @BrentonDana.
View all posts by Brenton Dickieson →
This entry was posted in Thoughtful Essays and tagged abolition of man, Boko haram, Bring Back Our Girls, C.S. Lewis, epistemology, kidnapping, Madeleine L'Engle, Malaysian Airlines Flight 370, Nigeria, philosophy, theology, Truth. Bookmark the permalink.