Neil Gaiman is a Jerk, and a review of The Graveyard Book

Neil Gaiman is a jerk.

Well, I don’t really mean that. But honestly, how many beautiful ideas is a guy allowed to have in a lifetime? There’s Coroline and American Gods, not to mention and incredible array of short stories, and practically inventing a genre of literature with Sandman. And now I’ve heard that his recent The Ocean at the End of the Lane was voted best book in the universe or something. I mean, seriously?

All deep-rooted bitterness aside, The Graveyard Book—you may remember I’m writing a review here—The Graveyard Book is based on a pretty elegant premise. An orphaned toddler wanders into a graveyard, and it is up to the dead people who live there to raise him. Brilliant.

The Mowgli character in this liminal fantasy is “Nobody Owens,” raised by the disembodied spirits of various generations under the protection of the graveyard. Needless to say, his education is eclectic. Because of his unique neighbourhood, he is able to speak the English of a hundred generation and has a very particular and narrow understanding of history. He learns to read English and Latin from the epitaphs on tombstones, but he also learns the particularly ghastly gifts of fading from view, dreamwalking, and haunting. It is a very clever book, able to draw in our cultural imagination of graveyards into a single bittersweet tale.

This is one of those books that can work at various “layers.” I know, I know. Books that are tinged with meaning, moral, or symbolism are terribly unfashionable right now. But The Graveyard Book does what good books should. I am always looking for a story that will capture the sense of alienation and loneliness I had when I was child. What could be better than a boy named “Nobody” who is practically invisible to humans and lives in a place that doesn’t exist? Moreover, parents reading this book are going to be left with the haunting feeling—see what I did there?—that they are in some danger of over-protecting their children. 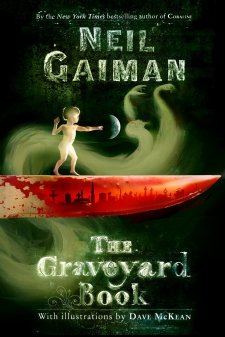 These morals emerge naturally from the narrative; none of them are forced. Critics of layered stories are missing the point, I think. Anyone reading Harry Potter would be a dangerously narrow reader if they didn’t see the social implications. Yet they read because the Harry Potter books are good literature that are great fun to read. The Graveyard Book is exactly that type of read.

I’m not surprised it’s good. As soon as I heard the premise I knew that it would be. It is not a perfectly good book. Gaiman is a short story writer at his best, so the book is episodic, filled with flashes of Nobody’s life as he grows. They are great episodes, but the plotline is really going somewhere. Nobody’s life has a particular direction, as readers slowly come to understand. Some of that sense of destiny is lost in the triptych style of storytelling, so a little bit of the payoff for the climax is missing too. It is not only the retelling of Kipling’s classic, nor is it simply an orphan tale. It is a messianic story, laced with prophecy that crosses many millennia and a few dimensions. I think that this particular element fades too much to the background.

But these are granular criticisms within a heap of praise. My real complaint is that Neil Gaiman is a jerk. And greedy too. The Graveyard Book won not only the Newbery Medal, but it also won the Carnegie Medal (a first double win, I believe). If that wasn’t enough, Gaiman took home the Hugo and Locus awards. How are other writer’s supposed to build a career when this guy is sitting down t

o a computer with his elegant premises, fantastic hair, and friendships with amazing illustrators (in this case, Dave McKean)?

Anyway, readers may note a touch of bitterness. I would hate for my grave feelings about Gaiman at the moment to overshadow what is a very great book. But don’t buy it. That will just help his cause. Read it in the aisle at the bookstore or over someone’s shoulder on the bus. No one will find that creepy at all.

“A Pilgrim in Narnia” is a blog project in reading and talking about the work of C.S. Lewis, J.R.R. Tolkien, and the worlds they touched. As a "Faith, Fantasy, and Fiction" blog, we cover topics like children’s literature, apologetics and philosophy, myths and mythology, fantasy, theology, cultural critique, art and writing. This blog includes my thoughts as I read through Lewis and Tolkien and reflect on my own life and culture. In this sense, I am a Pilgrim in Narnia--or Middle Earth, or Fairyland. I am often peeking inside of wardrobes, looking for magic bricks in urban alleys, or rooting through yard sale boxes for old rings. If something here captures your imagination, leave a comment, “like” a post, share with your friends, or sign up to receive Narnian Pilgrim posts in your email box. Brenton Dickieson is a father, husband, friend, university lecturer, and freelance writer from Prince Edward Island, Canada. You can follow him on Twitter, @BrentonDana.
View all posts by Brenton Dickieson →
This entry was posted in On Writing, Reviews and tagged Carnegie Medal, fantasy, Harry Potter, Hugo Award, J.K. Rowling, literature, Neil Gaiman, Newberry, The Graveyard Book. Bookmark the permalink.

30 Responses to Neil Gaiman is a Jerk, and a review of The Graveyard Book