“Screwtape Proposes a Toast”: A Discussion on All About Jack

Nearly two decades after the work that secured his fame as a public Christian intellectual, C.S. Lewis wrote a follow up to The Screwtape Letters. Lewis never thought Screwtape was worth the fuss, and he struggled to write from the demonic perspective in the original WWII-era Letters. It wasn’t until 1959, nearly twenty years later, that he agreed to finally write a follow up for The Saturday Evening Post.

The setting of the two eras is quite different. In 1941, Lewis is just past 40. He is a new voice in the public conversation and a rising star of Christian book writing. He knows he has the stuff to write popularly, translating his ideas so that they were accessible to most. By 1959, when Lewis was 60, he described himself as a dinosaur. He had written most of his best work, and though he had fallen in love and married, his wife was quite ill. Lewis was a different man twenty years later.

The context of the Letters is also different. The original Letters were written to war-time Britain, to a post-Christian culture still filled with nominal or cultural Christians. The world had teeth. It was a dangerous place to live, and ideology made a difference in real life. Technology had turned its ugly face to war, and one of the world’s greatest democracies had betrayed the rest.

In 1959, Lewis chose to write to an American audience. America in 1959 is on the edge of a new decade. 1950s U.S. had the greatest family and economic growth of its history. It is a generation with the victory of WWII in their experience, but a less firm sense of victory in Southeast Asia–which will soon become the highly contested Vietnam War. The Cold War is heightening, the Cuba Missile Crisis is around the corner, and the Dalai Lama and thousands of Tibetans are on the run from Chairman Mao’s China. America has just elected a young Roman Catholic visionary who will promise to beat Russia to the moon. The Beatles are practicing their music, ready to drop their first record in 1960 and change the world on Ed Sullivan in 1964. Racial integration, Martin Luther King Jr., Frank Sinatra, Ben Hur—the time was right for some of the best times in one of the strongest countries of the world.

Yet, even given his distance and the fact that he was a “dinosaur,” Lewis could see the potential for a downward turn for America. He tackles two things in this follow up to Screwtape–education and individualism–showing how the word “democracy” could be twisted to rob people of individuality, ingenuity, and spiritual strength. 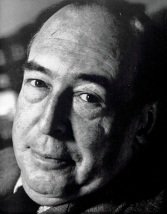 The genre this time changes a little. We have in 1959 a toast at a graduation banquet rather than a letter. More than the original Screwtape Letters, perhaps, the Toast is an incisive public critique of education, social politics, and cultural shifts in worldview. I also think Screwtape Proposes a Toast gives us another angle to Lewis’ The Abolition of Man: the world behind Screwtape’s speech in 1959 is really the dystopia of “Men Without Chests.” It is a critique that is still relevant today, and possibly prophetic, at least for those who have ears to hear.

Although the Toast has been circulating online for some time, The Saturday Evening Post has chosen to release it to the public on their website. What the SEP release does is to allow us to see the letter in the magazine (the PDF is essentially a photocopy) in its original layout with a giant mug shot of Sir Lewis, as well as a poem and a cartoon that seem remarkably out of place. It is well worth a peek.

Quite recently, I was interviewed by William O’Flaherty of the All About Jack podcast. William’s podcast is the premier social conversation media for C.S. Lewis and the Inklings, and it is a pleasure to be included. Make sure to check it out here and share it on social media. Below I’ve included some outline notes and some of my favourite quotes from “the Toast.”

Outline of “Screwtape Proposes a Toast”

On Grace vs. Law: “Hell expects and demands that it should be — as mine was — one of unbroken success. If it is not, you know what awaits you.”

On Humanity: “How often you will envy the humans their faculty of sleep!”

Adultery: “They all tasted to me like undersexed morons who had blundered or trickled into the wrong beds in automatic response to sexy advertisements, or to make themselves feel modern and emancipated, or to reassure themselves about their virility or their “normalcy,” or even because they had nothing else to do.”

On Conformity: “how should a jelly not conform?”

On Apathy: “Is the dullness of your present fare not a very small price to pay for the delicious knowledge that His whole great experiment is petering out?”

On Freedom: “I heard the other day that in that country a man could not, without a permit, cut down his own tree with his own axe, make it into planks with his own saw, and use the planks to build a toolshed in his own garden.”

On Twisting Words: “Democracy is the word with which you must lead them by the nose. The good work which our philological experts have already done in the corruption of human language makes it unnecessary to warn you that they should never be allowed to give this word a clear and definable meaning.”

On Equality: “No man who says I’m as good as you believes it. He would not say it if he did.”

On Equality & Democracy in Culture: “Under the influence of this incantation those who are in any or every way inferior can labour more wholeheartedly and successfully than ever before to pull down everyone else to their own level.”

On Individuality: “They might (horror of horrors!) become individuals.”

On the Death of Civilization: “For “democracy” or the “democratic spirit” (diabolical sense) leads to a nation without great men, a nation mainly of subliterates, full of the cocksureness which flattery breeds on ignorance, and quick to snarl or whimper at the first sign of criticism”

On the Tall Poppy Syndrome: “If the whole tendency of their society is opposed to every sort of excellence, why did they expect their scientists to excel?”

On the Tall Poppy Syndrome: “I’m as good as you is a useful means for the destruction of democratic societies. But it has a far deeper value as an end in itself, as a state of mind which, necessarily excluding humility, charity, contentment, and all the pleasures of gratitude or admiration, turns a human being away from almost every road which might finally lead him to Heaven.”

On Destroying Democracy: “It is our function to encourage the behaviour, the manners, the whole attitude of mind, which democracies naturally like and enjoy, because these are the very things which, if unchecked, will destroy democracy. You would almost wonder that even humans don’t see it themselves”

On Religion and Spirituality: “it will be an ill day for us if what most humans mean by “Religion” ever vanishes from the Earth”. It can still send us the truly delicious sins. The fine flower of unholiness can only grow in the close neighbourhood of the holy. Nowhere do we tempt so successfully as on the very steps of the altar.”

“A Pilgrim in Narnia” is a blog project in reading and talking about the work of C.S. Lewis, J.R.R. Tolkien, and the worlds they touched. As a "Faith, Fantasy, and Fiction" blog, we cover topics like children’s literature, apologetics and philosophy, myths and mythology, fantasy, theology, cultural critique, art and writing. This blog includes my thoughts as I read through Lewis and Tolkien and reflect on my own life and culture. In this sense, I am a Pilgrim in Narnia--or Middle Earth, or Fairyland. I am often peeking inside of wardrobes, looking for magic bricks in urban alleys, or rooting through yard sale boxes for old rings. If something here captures your imagination, leave a comment, “like” a post, share with your friends, or sign up to receive Narnian Pilgrim posts in your email box. Brenton Dickieson is a father, husband, friend, university lecturer, and freelance writer from Prince Edward Island, Canada. You can follow him on Twitter, @BrentonDana.
View all posts by Brenton Dickieson →
This entry was posted in News & Links and tagged abolition of man, America, C.S. Lewis, Education, Men Without Chests, Screwtape Proposes a Toast, The Screwtape Letters, Theology of Culture. Bookmark the permalink.

13 Responses to “Screwtape Proposes a Toast”: A Discussion on All About Jack