“You’re one of me too”: Venn Diagram Friends by Neil Gaiman and C.S. Lewis

It is one of the of the more moving moments in C.S. Lewis’ autobiography, Surprised by Joy. Lewis was living a largely lonely childhood, his only friend being his older brother. Then something utterly surprising happens:

It is a curious truth, noticed by many writers, that good fortune is nearly always followed by more good fortune, and bad, by more bad…. Many chapters ago I mentioned a boy who lived near us and who had tried, quite unsuccessfully, to make friends with my brother and myself. His name was Arthur…. I think it was shortly before the beginning of my last term at Wyvern that I received a message saying that Arthur was in bed, convalescent, and would welcome a visit. I can’t remember what led me to accept this invitation, but for some reason I did.
I found Arthur sitting up in bed. On the table beside him lay a copy of Myths of the Norsemen.
“Do you like that?” said I.
“Do you like that?” said he

You can image precisely what came next.

Next moment the book was in our hands, our heads were bent close together, we were pointing, quoting, talking—soon almost shouting—discovering in a torrent of questions that we liked not only the same thing, but the same parts of it and in the same way; that both knew the stab of Joy and that, for both, the arrow was shot from the North. Many thousands of people have had the experience of finding the first friend, and it is none the less a wonder; as great a wonder (pace the novelists) as first love, or even a greater (Surprised by Love, ch. 8).

For those that have found as great a wonder as a real friend, the “pace“–the apologetic tip of the hat to novelists who tell the stories of falling in love–is hardly necessary. C.S. Lewis found a lifelong friend in young Arthur Greeves, and they filled their teen years sharing writing and art with one another. All their lives, their letters are filled with the books they both love. 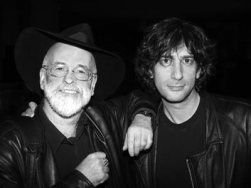 One day, while he was still a relatively minor short story writer, fantasy superstar Neil Gaiman found this kind of friendship.

As a journalist, Gaiman was sent to interview Terry Pratchett, who had recently written The Colour of Magic. I don’t know what Gaiman was thinking when he hunted Pratchett down with notebook and camera in hand, but this is what he got:

It was that weird thing when you sit down with someone and you realize that the Venn diagrams of your minds overlap. You share head space.

Immediately Gaiman and Pratchett started talking and making jokes, imagining forbidden books that are fun to read. Gaiman came to realize that:

We had the same kinds of head. “Oh my gosh! You’re one of me too. I didn’t know there was another one around.”

This interview, peppered with colourful language and odd, friendish references, tells the story. Start from around 7:30:

Eventually Pratchett and Gaiman would write Good Omens together–arguing over plot points and sharing characters over the phone as they laid out that odd, wonderful, and flawed romp through the end of the world.

The interview takes place on the day that Terry Pratchett died. I suspect these words of C.S. Lewis, written nearly 60 years ago, captures how Neil Gaiman felt on meeting such a synergistic friend as Terry Pratchett:

I had been so far from thinking such a friend possible that I had never even longed for one; no more than I longed to be King of England. If I had found that Arthur had independently built up an exact replica of the Boxonian world I should not really have been much more surprised. Nothing, I suspect, is more astonishing in any man’s life than the discovery that there do exist people very, very like himself (Surprised by Love, ch. 8).

“A Pilgrim in Narnia” is a blog project in reading and talking about the work of C.S. Lewis, J.R.R. Tolkien, and the worlds they touched. As a "Faith, Fantasy, and Fiction" blog, we cover topics like children’s literature, apologetics and philosophy, myths and mythology, fantasy, theology, cultural critique, art and writing. This blog includes my thoughts as I read through Lewis and Tolkien and reflect on my own life and culture. In this sense, I am a Pilgrim in Narnia--or Middle Earth, or Fairyland. I am often peeking inside of wardrobes, looking for magic bricks in urban alleys, or rooting through yard sale boxes for old rings. If something here captures your imagination, leave a comment, “like” a post, share with your friends, or sign up to receive Narnian Pilgrim posts in your email box. Brenton Dickieson is a father, husband, friend, university lecturer, and freelance writer from Prince Edward Island, Canada. You can follow him on Twitter, @BrentonDana.
View all posts by Brenton Dickieson →
This entry was posted in Reflections and tagged Arthur Greeves, books, C.S. Lewis, Discworld, fantasy, friendship, Good Omens, literary friendship, Neil Gaiman, Surprised by Joy, Terry Pratchett, The Colour of Magic, writing. Bookmark the permalink.

25 Responses to “You’re one of me too”: Venn Diagram Friends by Neil Gaiman and C.S. Lewis