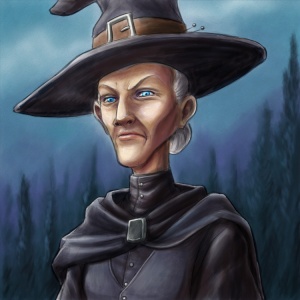 At Mythcon last year, a bright young scholar said that she thought that Granny Weatherwax is the alter ego of Terry Pratchett—not in personality, but in her wry, upside-down, “limit evil” approach to life in this strange world. At least, I think she said something like that. There were a lot of ideas swimming about the room, weaving their way between leather-bound notebooks, elven swords, and the occasional ancient rune etched into a desk. Although light moves slowly across the Discworld, arguments fly quickly through the fantasy world.

For those that don’t know, Terry Pratchett has two “Witches” cycles in his Discworld series. They are pretty awesome, wrapped around a coven of witches in the Ramtop mountains and the young Tiffany Aching. Below I post a great Discworld Reading Guide and a list of the Discworld witch novels, but I wanted to capture the intriguing opening to Witches Abroad.

In Witches Abroad, Pratchett decides to undeceive us about what witches are really like—at least in the Discworld. In our world, or at least in the European continent that has some strange echoes on the Disc, witches have been stereotyped to the point of silliness. I don’t know what we would do if there were humans that could really get to the devil to do things for them—I suppose we’d have to reconsider the basis of our law—but some of the medieval stereotypes have stuck around with us. Some Pratchett likes to play with; others he undercuts. Here are some of the ways he tries to turn our expectations upside down. There is also a great dig on fantasy writers.

Up on the mountain, the sabbat had settled down a bit. Artists and writers have always had a rather exaggerated idea about what goes on at a witches’ sabbat. This comes from spending too much time in small rooms with the curtains drawn, instead of getting out in the healthy fresh air.

For example, there’s the dancing around naked. In the average temperate climate there are very few nights when anyone would dance around at midnight with no clothes on, quite apart from the question of stones, thistles, and sudden hedgehogs.

And there’s the food and drink – the bits of reptile and so on. In fact, witches don’t go for that sort of thing. The worst you can say about the eating habits of the older type of witch is that they tend to like ginger biscuits dipped in tea with so much sugar in it that the spoon won’t move and will drink it out of the saucer if they think it’s too hot. And do so with appreciative noises more generally associated with the cheaper type of plumbing system. Legs of toad and so on might be better than this.

Then there’s the mystic ointments. By sheer luck, the artists and writers are on firmer ground here. Most witches are elderly, which is when ointments start to have an attraction, and at least two of those present tonight were wearing Granny Weatherwax’s famous goose-grease-and-sage chest liniment. This didn’t make you fly and see visions, but it did prevent colds, if only because the distressing smell that developed around about the second week kept everyone else so far away you couldn’t catch anything from them.

And finally there’s sabbats themselves. Your average witch is not, by nature, a social animal as far as other witches are concerned. There’s a conflict of dominant personalities. There’s a group of ringleaders without a ring. There’s the basic unwritten rule of witchcraft, which is ‘Don’t do what you will, do what I say.’ The natural size of a coven is one. Witches only get together when they can’t avoid it.… 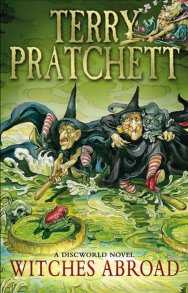 There was of course no such thing as a typical witch’s cottage, but if there was such a thing as a non-typical witch’s cottage, then this was certainly it. Apart from various glassy-eyed animal heads, the walls were covered in bookshelves and water-colour pictures. There was a spear in the umbrella stand. Instead of the more usual earthenware and china on the dresser there were foreign-looking brass pots and fine blue porcelain. There wasn’t a dried herb anywhere in the place but there were a great many books, most of them filled with Desiderata’s small, neat handwriting. A whole table was covered with what were probably maps, meticulously drawn.

Granny Weatherwax didn’t like maps. She felt instinctively that they sold the landscape short….

“A Pilgrim in Narnia” is a blog project in reading and talking about the work of C.S. Lewis, J.R.R. Tolkien, and the worlds they touched. As a "Faith, Fantasy, and Fiction" blog, we cover topics like children’s literature, apologetics and philosophy, myths and mythology, fantasy, theology, cultural critique, art and writing. This blog includes my thoughts as I read through Lewis and Tolkien and reflect on my own life and culture. In this sense, I am a Pilgrim in Narnia--or Middle Earth, or Fairyland. I am often peeking inside of wardrobes, looking for magic bricks in urban alleys, or rooting through yard sale boxes for old rings. If something here captures your imagination, leave a comment, “like” a post, share with your friends, or sign up to receive Narnian Pilgrim posts in your email box. Brenton Dickieson is a father, husband, friend, university lecturer, and freelance writer from Prince Edward Island, Canada. You can follow him on Twitter, @BrentonDana.
View all posts by Brenton Dickieson →
This entry was posted in Fictional Worlds, Memorable Quotes and tagged Discworld, Granny Weatherwax, Macbeth, Mythcon, stereotypes, Terry Pratchett, Tiffany Aching, witches, Witches Abroad, writing. Bookmark the permalink.