The Term is Over: The Holidays Have Begun

As a tribute to all the students who have been sitting on the edge of their seats these last few days, staring out the window longingly at the green grass bending in early summer breezes, I thought I would post the evocative ending of C.S. Lewis’ The Last Battle.

As a child, Lewis loathed school. In the story of his life he actually named one of his schools after a concentration camp. In his childhood letters to his best friend, Arthur Greeves, we can see how Lewis longed to see him in the “hols”–what they called holidays from school. Nearly 100 years ago, in a July 24, 1915 letter he talks about reading poetry–“exactly the sort of romantic strangeness and dreaminess you & like”–and working on his drawing. Arthur was an artist while Lewis was a writer, and they coached one another. The holidays were about long romps though the Irish countryside and warm days beneath trees with a book or drawing pad on one knee. It was during one of these holidays that he and Arthur met, becoming fast friends in long life.

Even as an adult Lewis looked forward to holidays. He would go on long hikes, putting up in little inns and cottages, have lunches of bread and meat and cheese and drinking beer pulled from casks. He visited friends, wrote books, and swam in the little pond in his backyard–scattering ducks and frogs as he slipped into the chilly water. When he had a whole year off as he was writing Narnia, he spent most days in an old Oxford library reading dusty 500-year-old books–many of them bad. He called it the happiest year of his life. 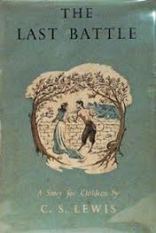 C.S. Lewis loved the holidays so much that when it came to describing heaven in one of his Narnian books, he imagined it like being the morning after the last day of school. In this scene in The Last Battle, the children of Earth and Narnia have bounded through an endless field, a great symphony of children and talking animals cheering and shouting with excitement. Then they come to the great lion Aslan, who does many wonderful things. The lion, though, looks at the children–the kings and queens of Narnia, but normal children on Earth–and speaks to them.

Lucy said, “We’re so afraid of being sent away, Aslan. And you have sent us back into our own world so often.”

“No fear of that,” said Aslan. “Have you not guessed?”

Their hearts leaped and a wild hope rose within them….

“The term is over: the holidays have begun. The dream is ended: this is the morning.”

And as He spoke He no longer looked to them like a lion; but the things that began to happen after that were so great and beautiful that I cannot write them.

And for us this is the end of all the stories, and we can most truly say that they all lived happily ever after. But for them it was only the beginning of the real story. All their life in this world and all their adventures in Narnia had only been the cover and the title page: now at last they were beginning Chapter One of the Great Story which no one on earth has read: which goes on forever: in which every chapter is better than the one before.

Have an awesome summer holiday everyone! The joy you feel now is, perhaps, a little taste of something much bigger–or at least a hint that the adventure of this life is only the first few steps of a much greater quest.

“A Pilgrim in Narnia” is a blog project in reading and talking about the work of C.S. Lewis, J.R.R. Tolkien, and the worlds they touched. As a "Faith, Fantasy, and Fiction" blog, we cover topics like children’s literature, apologetics and philosophy, myths and mythology, fantasy, theology, cultural critique, art and writing. This blog includes my thoughts as I read through Lewis and Tolkien and reflect on my own life and culture. In this sense, I am a Pilgrim in Narnia--or Middle Earth, or Fairyland. I am often peeking inside of wardrobes, looking for magic bricks in urban alleys, or rooting through yard sale boxes for old rings. If something here captures your imagination, leave a comment, “like” a post, share with your friends, or sign up to receive Narnian Pilgrim posts in your email box. Brenton Dickieson is a father, husband, friend, university lecturer, and freelance writer from Prince Edward Island, Canada. You can follow him on Twitter, @BrentonDana.
View all posts by Brenton Dickieson →
This entry was posted in Memorable Quotes and tagged Arthur Greeves, C.S. Lewis, children's literature, Collected Letters of C.S. Lewis, heaven, holidays, last day of school, letters, Narnia, Poetry, summer, The Last Battle, writing. Bookmark the permalink.

11 Responses to The Term is Over: The Holidays Have Begun