Orwellian Advice: A Guest Post by the Mere Inkling 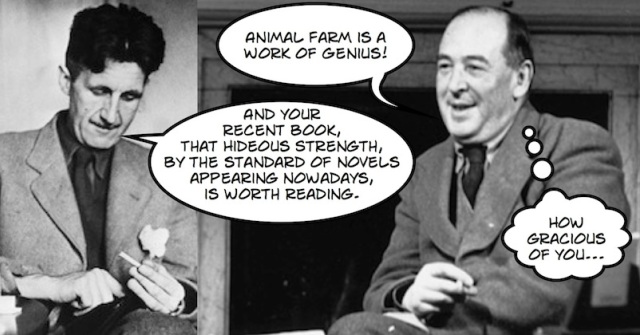 The title of this post is slightly misleading. In truth, it does contains advice from Eric Arthur Blair (1903-1950) whose pen name was George Orwell. However, because of the impact of his two dystopian classics, Nineteen Eighty-Four and Animal Farm, the author’s name has actually become a true English adjective . . . one that might suggest I’m alluding to futuristic or totalitarian matters.

Or·well·i·an [awr-wel-ee-uhn] means something that resembles his literary work, especially as described in the aforementioned novel and novella. (Within the Christian literary community, “Lewisian” is common shorthand for referring to C.S. Lewis . . . but that word is unlikely to ever find its way into standard dictionaries.)

Despite the enormous (and eternal) differences between Orwell and Lewis, they did have something significant in common. More about that in a moment.

As the graphic I created above reveals (from actual quotations), Lewis had a better opinion of Orwell’s work than vice versa. Orwell disliked Lewis and resented the fact that he was popular among many common people. He particularly disliked Lewis’ traditional (evangelical) Christianity. In his review of That Hideous Strength, Orwell dismissed the biblically based supernatural as a version of “magic.”

Much is made of the fact that the scientists are actually in touch with evil spirits, although this fact is known only to the inmost circle. Mr. Lewis appears to believe in the existence of such spirits, and of benevolent ones as well. He is entitled to his beliefs, but they weaken his story . . .

Orwell was one of those “professing” Christians who is accurately labeled a hypocrite. He was a communing member of the Church of England, and advocated a Judeo-Christian moral code, but did not believe in an afterlife. The following letter, written to Eleanor Jaques in 1932, reveals his hypocrisy.

It seems rather mean to go to HC [Holy Communion] when one doesn’t believe, but I have passed myself off for pious & there is nothing for it but to keep up with the deception.

In a comment to my last post, a good friend of Mere Inkling, Brenton Dickieson at A Pilgrim in Narnia, reminded me of a thought-provoking essay on English written by Orwell. His essay, “Politics and the English Language,” addresses a number of problems with the language. He considers dying metaphors, verbal false limbs, pretentious diction, and meaningless words.

A Similarity in the Two Writers’ Advice

Orwell’s goal is “the scrapping of every word or idiom which has outworn its usefulness. It has nothing to do with correct grammar and syntax, which are of no importance so long as one makes one’s meaning clear, or with the avoidance of Americanisms, or with having what is called a ‘good prose style.’”  [As irritating as I imagine most Europeans find Americanisms!] Writers of fiction will enjoy the way Orwell explains the challenge of “showing, not telling.”

What is above all needed is to let the meaning choose the word, and not the other way around. In prose, the worst thing one can do with words is surrender to them. When you think of a concrete object, you think wordlessly, and then, if you want to describe the thing you have been visualizing you probably hunt about until you find the exact words that seem to fit it.

When you think of something abstract you are more inclined to use words from the start, and unless you make a conscious effort to prevent it, the existing dialect will come rushing in and do the job for you, at the expense of blurring or even changing your meaning. Probably it is better to put off using words as long as possible and get one’s meaning as clear as one can through pictures and sensations. Afterward one can choose—not simply accept—the phrases that will best cover the meaning, and then switch round and decide what impressions one’s words are likely to make on another person.

This last effort of the mind cuts out all stale or mixed images, all prefabricated phrases, needless repetitions, and humbug and vagueness generally. But one can often be in doubt about the effect of a word or a phrase, and one needs rules that one can rely on when instinct fails. I think the following rules will cover most cases:

These rules sound elementary, and so they are, but they demand a deep change of attitude in anyone who has grown used to writing in the style now fashionable.

Students of Lewis will note in the final passage the parallel with advice he provided to a correspondent in 1956. Although the context is different—Orwell’s is a formal essay and Lewis’ a casual correspondence written to a child, the similarities are significant. Lewis would have been familiar with Orwell’s essay, composed a decade before his letter, but the resemblance between their words is better attributed to shared literary philosophies and the self-evident nature of the principles. Lewis identified five important considerations when writing.

Whatever the two authors thought about the other, they certainly shared some similar views on the subject of effective writing. And, I think we can assume with confidence that Lewis would concur with Orwell’s final rule. Under no circumstances should we resort to barbarity! For, as Lewis wrote in The Four Loves, “Who does not prefer civility to barbarism?”

The “Mere Inkling” is a blog I read every week. You can check it out here. If you are interested in reading Orwell’s “Politics and the English Language” in its entirety, you can find it here. This post is part of a series on Orwell and Lewis at the 70th anniversary of Animal Farm and That Hideous Strength. See also:

“A Pilgrim in Narnia” is a blog project in reading and talking about the work of C.S. Lewis, J.R.R. Tolkien, and the worlds they touched. As a "Faith, Fantasy, and Fiction" blog, we cover topics like children’s literature, apologetics and philosophy, myths and mythology, fantasy, theology, cultural critique, art and writing. This blog includes my thoughts as I read through Lewis and Tolkien and reflect on my own life and culture. In this sense, I am a Pilgrim in Narnia--or Middle Earth, or Fairyland. I am often peeking inside of wardrobes, looking for magic bricks in urban alleys, or rooting through yard sale boxes for old rings. If something here captures your imagination, leave a comment, “like” a post, share with your friends, or sign up to receive Narnian Pilgrim posts in your email box. Brenton Dickieson is a father, husband, friend, university lecturer, and freelance writer from Prince Edward Island, Canada. You can follow him on Twitter, @BrentonDana.
View all posts by Brenton Dickieson →
This entry was posted in Guest Blogs, Memorable Quotes and tagged 1984, Animal Farm, C.S. Lewis, dystopia, George Orwell, Politics of the English Language, Science Fiction, The Four Loves, writing. Bookmark the permalink.

11 Responses to Orwellian Advice: A Guest Post by the Mere Inkling