“Down In The Depth Of Mine Iniquity” by Fulke Greville

Posted on October 5, 2015 by Brenton Dickieson 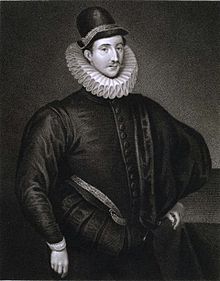 Baron Fulke Greville was one of the 1550s boys–one of those men born during the tumultuous period in the transition of the child king Edward VI to the prosecutor, Bloody Mary, to the stabilizing Queen Elizabeth. Born in that decade were people like Napier, Browne, Camden, Raleigh, Spenser, Marlowe, Hooker, Lyly, and Sidney–really the people who created the revolution of poetry and ideas in the late Elizabethan and early Jacobian period. It is the generation that produced Shakespeare and the King James Bible and, a little later, Donne and Milton. It is remembered as the Golden Age of English verse.

Fulke Greville is now all but lost to most of us. Perhaps the name “Fulke” is off-putting, but his verse isn’t especially accessible. The Digital Age is preserving and recovering lesser known Golden Age writers, but preserving them for a generation that has lost the art of reading poetry.

Still, there are some who walk among us. One is a colleague who is teaching Renaissance English Verse at the University of Prince Edward Island this fall. Gerald Wandio was actually my English Writing teacher, ever and anon ago. We are working together on a pilot classroom project and share a love of music.

Gerald has recently pushed upon me the lost Fulke Greville. C.S. Lewis dedicates a section to Grevell, the first Lord Brooke, in his magnum opus, The Oxford History of English Literature’s English Literature in the Sixteen Century, Excluding Drama. Greville, Lewis argued, is doubly important to the historian. He was an interesting Golden Age poet, but he went on to create a new style (manner) that was neither of the two trends that followed: Metaphysical (Donne and Herbert and the gang) or Augustan (whose father is Alexander Pope).

Lewis goes on to give one of his startling and precise epitaphs. He writes:

But Greville has an interest quite apart from literary history. He wrote as he thought, and, being a man of his age, he thought chiefly about religion and government. Being a logical man, he connected his thoughts on the two subjects. What this led to he finally succeeded in expressing in four lines of such precision and such sombre melody that nothing can ever be added to them….

Oh wearisome Condition of Humanity!
Borne under one Law to another bound:
Vainely begot, and yet forbidden vanity,
Created sicke, commanded to be sound.

Gerald would have added “love and sex” to “religion and government,” but he was able to see some of the gems that Lewis saw and others have long since forgotten. I’ll have to talk to Gerald sometime about “oddes betweene the earth and skie”–Lewis’ idea that Greville thought that life in the world and belief in God were both in him and yet irreconcilable.

I wanted, though, to share with readers the poem that was recommended to me and which Gerald is assigning this semester. It is a stunner, containing within it the entire gospel story in one man’s chest. I suggested to Gerald that the second stanza, with the “-tion” endings, sounded like it would rap well. He wrote back and asked whether Greville was a Kanye or Eminem fan.

XCIX by Fulke Greville, Lord Brooke, Chancellor of the Exchequer

Down in the depth of mine iniquity,
That ugly center of infernal spirits;
Where each sin feels her own deformity,
In those peculiar torments she inherits,
Depriv’d of human graces, and divine,
Even there appears this saving God of mine.

And in this fatal mirror of transgression,
Shows man as fruit of his degeneration,
The error’s ugly infinite impression,
Which bears the faithless down to desperation;
Depriv’d of human graces, and divine,
Even there appears this saving God of mine.

In power and truth, Almighty and eternal,
Which on the sin reflects strange desolation,
With glory scourging all the Sprites infernal,
And uncreated hell with unprivation;
Depriv’d of human graces, not divine,
Even there appears this saving God of mine.

For on this sp’ritual cross condemned lying,
To pains infernal by eternal doom,
I see my Saviour for the same sins dying,
And from that hell I fear’d, to free me, come;
Depriv’d of human graces, not divine,
Thus hath his death rais’d up this soul of mine

“A Pilgrim in Narnia” is a blog project in reading and talking about the work of C.S. Lewis, J.R.R. Tolkien, and the worlds they touched. As a "Faith, Fantasy, and Fiction" blog, we cover topics like children’s literature, apologetics and philosophy, myths and mythology, fantasy, theology, cultural critique, art and writing. This blog includes my thoughts as I read through Lewis and Tolkien and reflect on my own life and culture. In this sense, I am a Pilgrim in Narnia--or Middle Earth, or Fairyland. I am often peeking inside of wardrobes, looking for magic bricks in urban alleys, or rooting through yard sale boxes for old rings. If something here captures your imagination, leave a comment, “like” a post, share with your friends, or sign up to receive Narnian Pilgrim posts in your email box. Brenton Dickieson is a father, husband, friend, university lecturer, and freelance writer from Prince Edward Island, Canada. You can follow him on Twitter, @BrentonDana.
View all posts by Brenton Dickieson →
This entry was posted in Reflections and tagged Bloody Mary, C.S. Lewis, Donne, Elizabethan era, Eminem, English Literature in the Sixteenth Century, Fulke Greville, Kanye West, Marlowe, Poetry, Queen Elizabeth, religion, Shakespeare, Sidney, Theology of Culture. Bookmark the permalink.