Faërie Stories in The Labyrinth: A David Bowie Tribute Post

Posted on January 11, 2016 by Brenton Dickieson 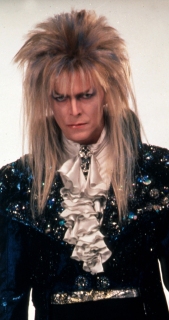 We woke up to the news as weather giants threw the sky against our windows and rocked the house in their rollicking. I had just been thinking about Bowie yesterday, but I suppose everyone has.

He is the kind of guy that makes you believe in life on Mars. Everybody has their heroes, and the rebel Starman was one for many. Modern love is like that, I guess, helping us deal with changes by dancing in the street with all the young dudes. An oddity in space, Bowie helped young Americans–and a few others–in the late age of rock ‘n’ roll ask the question, “Where Are We Now?” Today, he is the man who sold the world.

Thinking about Bowie, I have a little Ziggy Stardust in my eyes.

My first memory of Bowie wasn’t the music, which I didn’t get until I was older. I would go back to Bowie with “Under Pressure”–he and Freddie Mercury improvising their way to new musical heights.

But my very first memory was the Jim Henson film, Labyrinth. This has to be, without doubt, the creepiest Muppet film ever. I reacted strongly to the film as a child: frustration, intrigue, terror, revulsion, surprise, delight, and an awkward boyhood crush on Jennifer Connelly as Sarah, the heroine. It was a powerful film, not least because of David Bowie as Jareth. Evil and allure, Bowie is my archetypal Goblin King. 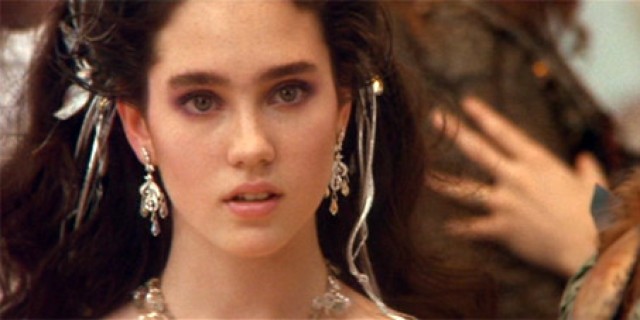 You can never trust a goblin king, for the goblin king loves to steal children’s lives.

Sarah knows this, yet she struggles to keep her distance from Jareth and to focus on her task. It is only an hour and a half, but when I watch the film I feel like I have spent hours with Sarah in the hopeless maze of her imagination.

One of the brilliant, understated parts of Labyrinth is Sarah’s bedroom. Have you looked carefully about how her room is designed? 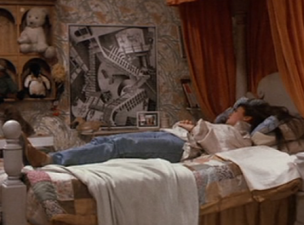 The adventure that Sarah faces, with friends on one side, enemies on the other, and traitors in her midst, are all in Sarah’s room. Her teddy bears, her toys, the games and friends of her childhood imagination–now sitting immobile in her teenage dislocation–will soon animate the nightmare of a generation. Even the impossible moving stairs scene that Sarah faces–really Escher’s world–is in the poster on Sarah’s wall.

Still, Sarah is not without resources. Her favourite stuffie is called Lancelot, and Lancelot always takes up adventures. Her entire childhood has prepared her for the adventure to defeat the Goblin King and save her little brother. Most important of all, Sarah has her books.

Sarah’s bookshelf is a valuable resource for fighting goblin kings and other foes. The Halloween Inn has catalogued the books that we can see in Sarah’s room:

While my list would be different–much like J. Aleksandr Wootton’s list here–the principle is the same: faërie stories are essential for preparing us for life’s adventures. These books, their stories and characters and hard choices, echo through Jareth’s challenge and Sarah’s adventure. In thinking about fairy tales, C.S. Lewis reminded us that sometimes there are dragons in life that we must slay. Echoing that sentiment, Neil Gaiman quoted G.K. Chesterton:

Modern life is like Bowie as the Goblin King. Not just because modern life is often frustrating and sometimes dances with Muppets in effeminate clothing. Life, like the Goblin King, tends to steal our childhood. One of the greatest resources we have for conquering the labyrinthine quality of daily struggles is to return to the books and stories and imaginative art of our nursery days.

David Bowie is gone, but his character lives on. It is intriguing that the art we make–and the decisions too–live long past our mortal lives. This is something that fantasy literature reminds us of all the time.

“A Pilgrim in Narnia” is a blog project in reading and talking about the work of C.S. Lewis, J.R.R. Tolkien, and the worlds they touched. As a "Faith, Fantasy, and Fiction" blog, we cover topics like children’s literature, apologetics and philosophy, myths and mythology, fantasy, theology, cultural critique, art and writing. This blog includes my thoughts as I read through Lewis and Tolkien and reflect on my own life and culture. In this sense, I am a Pilgrim in Narnia--or Middle Earth, or Fairyland. I am often peeking inside of wardrobes, looking for magic bricks in urban alleys, or rooting through yard sale boxes for old rings. If something here captures your imagination, leave a comment, “like” a post, share with your friends, or sign up to receive Narnian Pilgrim posts in your email box. Brenton Dickieson is a father, husband, friend, university lecturer, and freelance writer from Prince Edward Island, Canada. You can follow him on Twitter, @BrentonDana.
View all posts by Brenton Dickieson →
This entry was posted in Fictional Worlds and tagged David Bowie, Escher, faerie, fairytales, fantasy, Fictional Universes, film, intertextuality, jennifer connelly, Jim Henson, Labyrinth, muppets, music, Ziggy Stardust. Bookmark the permalink.

19 Responses to Faërie Stories in The Labyrinth: A David Bowie Tribute Post