When Screwtape Haunts in Eden: Testing the Possibilities of the Screwtape-Ransom Universe 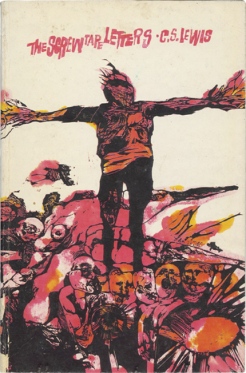 Thanks to the smooth voice and broadcasting know-how of C.S. Lewis kingmaker William O’Flaherty, I am able to share with you the audio of my recent talk at the C.S. Lewis and Friends Colloquium at Taylor University in Upland, IN. This is the second time I was able to attend the Taylor Conference. In 2012, I presented a paper called, “Teaching Screwtape for a New Generation” (you can read the full paper and hear the talk here). It was the place that truly launched my academic work in C.S. Lewis, and I was pleased to return in June 2016.

Overall, the quality of the papers at the conference was quite strong, and I was struck by the level of engagement by a number of the students. It was also an environment where senior and established academics and writers engaged critically with the younger and emerging scholars. As one of the latter party, it was an ideal environment to play with ideas and ask for feedback.

Here is the abstract of the paper I presented:

Recently, I had the opportunity to publish an archival piece that reconfigures our understanding of C.S. Lewis’ WWII-era fiction project. A previously unpublished handwritten preface to The Screwtape Letters shows that Lewis played with the idea of including Screwtape in the same “other world” as the science fiction books that feature Dr. Elwin Ransom. Using this manuscript evidence, it is important to test the critical limits of an extended Ransom fictional universe—to inquire of the usefulness of including Screwtape’s abysmal underworld in the mythic construct of the Field of Arbol. I will suggest a rereading of Perelandra in light of this speculative worldview re-orientation. If a Screwtapian reading of Perelandra confirms the value of considering these books as part of a Ransom Cycle—rather than merely a Space Trilogy—we can imagine the significance for future work in a number of areas, including Lewis’s invented language and angelology, as well the breadth of his mythmaking project. 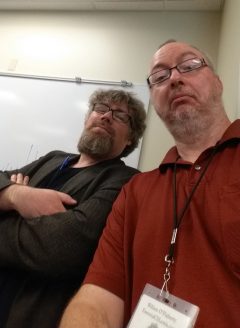 It is a fun talk that feeds into the larger project of looking at C.S. Lewis’ WWII-era fiction as a whole. I cannot yet share the entire paper, but you can hear the talk on William’s “All About Jack” podcast (click here). You can follow along in the Prezi (click here), which is like an online slide show. I cannot provide the handout I used in the session, but you can see the full “Ransom Preface” if you click here, or find the original publication here.

You will also see William’s paper (in the same session of mine), “Battlefield of the Mind: Examining Screwtape’s Preferred Method.” There is a bit of interplay between the two paper–something I played up for fun in my talk. William is also pointing back to his book, C.S. Lewis Goes to Hell. William has interviewed me a number of times for All About Jack, so I was pleased to turn the tape recorder on to him when his book came out (check it out here).

Working on The Screwtape Letters, I have also created a Manuscript Timeline and wrote about How Screwtape Was Introduced to the World in its humble little fashion. I hope this contributes to the growing interest in considering Screwtape for its merits as a piece of speculative fiction and as a cultural artifact.

“A Pilgrim in Narnia” is a blog project in reading and talking about the work of C.S. Lewis, J.R.R. Tolkien, and the worlds they touched. As a "Faith, Fantasy, and Fiction" blog, we cover topics like children’s literature, apologetics and philosophy, myths and mythology, fantasy, theology, cultural critique, art and writing. This blog includes my thoughts as I read through Lewis and Tolkien and reflect on my own life and culture. In this sense, I am a Pilgrim in Narnia--or Middle Earth, or Fairyland. I am often peeking inside of wardrobes, looking for magic bricks in urban alleys, or rooting through yard sale boxes for old rings. If something here captures your imagination, leave a comment, “like” a post, share with your friends, or sign up to receive Narnian Pilgrim posts in your email box. Brenton Dickieson is a father, husband, friend, university lecturer, and freelance writer from Prince Edward Island, Canada. You can follow him on Twitter, @BrentonDana.
View all posts by Brenton Dickieson →
This entry was posted in Fictional Worlds, Original Research and tagged C.S. Lewis, fantasy, Fictional Universes, Ransom Trilogy, research, Screwtape, Taylor University, The Screwtape Letters, William O'Flaherty. Bookmark the permalink.

16 Responses to When Screwtape Haunts in Eden: Testing the Possibilities of the Screwtape-Ransom Universe