C.S. Lewis’ “Till We Have Faces” is Today’s Daily Deal on Audible

Posted on February 12, 2017 by Brenton Dickieson 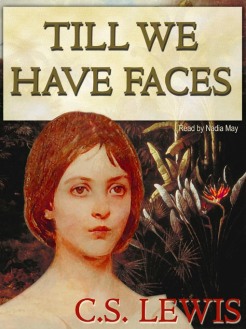 Just a quick note. C.S. Lewis’ classical myth retold, Till We Have Faces, is the Audible.com “Daily Deal.” Most audiobooks run between $10 and $20, but Audible has a membership system. The gold level runs $15 a book, while the platinum level is $10 a book. However, when you are a member, you can take advantage of occasional sales (2 for 1 or 3 for 2, and some specialized 50% off deals from time to time). Americans can also take advantage of Kindle-Audible combo deals, often in self-help and class genres.

The one regular sale is the daily deal, where full price audiobooks are $2.95-$3.95. 80% of these are mysteries, romances, and books with Greek letters in the title, like The Omega Calendar and The Alpha Conspiracy. Occasionally, however, there are some gems, and today is one of them.

Till We Have Faces is a unique C.S. Lewis book for a number of reasons. While there are still fantastic elements in the book, it is set so solidly within the classical Greek world that it seems inaccurate to call it a fantasy. It is the story of Psyche and Cupid, recast in a fictional pre-Christian Greek colony. The story is Orual’s diary–but more than a diary, it is a passionate testimony against the gods for their cruelty by a woman who has lost everything and so has nothing to fear from them.

Most of Lewis’ fiction is first person, but Till We Have Faces has such a distinct voice and setting that it would be hard to connect it to Narnia and the Ransom Cycle if we didn’t know that C.S. Lewis had written it. Partly, I think, the flavour and sensibility is due to the fact that Joy Davidman was part of the process of writing the novel. Partly it is the form that frees Lewis to explore language, myth, and ideas in an entirely new way.

Nadia May is the reader of Till We Have Faces. She is exactly the right kind of reader, voicing the fierce pain, anger, and incredulity that Orual feels, while capturing the courtly world around her with a unique blend of sensitivity and stateliness.

If you are a member, you can now own this audiobook for $2.95. If you want to become a member, you can sign up for free and get one free audiobook. I would suggest buying an indie book, because the free book promotion is the highest paying feature to authors in the Audible framework.

In other news, Friday had the 3rd highest number of hits ever on http://www.aPilgrimInNarnia.com, and last week was the 2nd most active week ever. This was mostly due to some pretty nerdy analysis on C.S Lewis’ essays (see here), which has taken off for some reason. But I am guessing that someone Twitter famous tweeted my blog post on “Screwtape on Pleasure and Distraction,” an old post that has been hot again for the last month. This may also be the “Orwell Effect” that we are seeing: since the election of Donald Trump, sales of dystopian books like 1984 have skyrocketed. The Screwtape Letters fits well in that mood. I also suspect that there must be another awful 50 Shades movie in the works as my biggest post ever–50 Shades of Bad Writing–is getting new readership again.

Have an excellent week!

“A Pilgrim in Narnia” is a blog project in reading and talking about the work of C.S. Lewis, J.R.R. Tolkien, and the worlds they touched. As a "Faith, Fantasy, and Fiction" blog, we cover topics like children’s literature, apologetics and philosophy, myths and mythology, fantasy, theology, cultural critique, art and writing. This blog includes my thoughts as I read through Lewis and Tolkien and reflect on my own life and culture. In this sense, I am a Pilgrim in Narnia--or Middle Earth, or Fairyland. I am often peeking inside of wardrobes, looking for magic bricks in urban alleys, or rooting through yard sale boxes for old rings. If something here captures your imagination, leave a comment, “like” a post, share with your friends, or sign up to receive Narnian Pilgrim posts in your email box. Brenton Dickieson is a father, husband, friend, university lecturer, and freelance writer from Prince Edward Island, Canada. You can follow him on Twitter, @BrentonDana.
View all posts by Brenton Dickieson →
This entry was posted in Reviews and tagged 1984, 50 Shades of Grey, audiobooks, C.S. Lewis, Donald Trump, dystopia, essay writing, George Orwell, Joy Davidman, myth, mythopoiea, Ransom Trilogy, The Screwtape Letters, Till We Have Faces. Bookmark the permalink.

4 Responses to C.S. Lewis’ “Till We Have Faces” is Today’s Daily Deal on Audible