According to the scrupulous historians at Wikipedia, a 2007 report appeared in Multnomah County, OR, that suggested a need to hire Klingon translators for mental health support programs if clients surrendered to care only able to speak Klingon. As a person who writes policy for government, I immediately smelled a rat. I can’t imagine that wasn’t an inside joke. After all, you will find these examples of colleges and college programs in a policy book I wrote in preparation for legislation:

Even policy writers need to have a little fun. 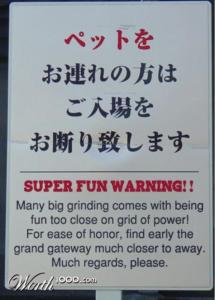 But Klingon is just one example—and perhaps one of the least successful examples—of a “constructed language.” Constructed or invented languages are those that don’t emerge organically from a community, but are designed for some sort of utility. Latin evolved into French and Spanish, but Latino Sine Flexione is an artificial modification of Latin. Basic English and Globish are simplifications of English, but globalized Englishes—like Frenglish, Pidgin, and Engrish—are emerging organically.

It is obviously a lot more complex than this, but I think this simplification can work. Quenya and Klingon are invented and hypothetical languages for speculative universes, but they could be “native” languages if children grew up speaking them in the home (despite the very limited vocabulary of each). As such, they could evolve and naturalize from that point on. Esperanto began as a completely artificial project, and has largely failed to become the reverse of Babel it was dreamed up to become. But it has up to 2000 native speakers and up to 2 million speakers globally. It has changed since it has naturalized, as Elvish and Trekkie languages would evolve if they became a normal part of life.

There aren’t many naturalized artificial languages. I suppose systems might count, like computer and mathematical linguistic constructs or scientific systems like botany. I don’t know that these can truly naturalize, though the Robot Interaction Language (ROILA) has a chance—if it gets out of the lab and we don’t all die in the Robot Apocalypse.

My own language path shows the fun of language stories. I grew up in an English community but part of a bilingual country. Part of my schooling, then, was a recovery of French that was dying out (Harry Potter in French is a trip, by the way). As a kid I jabbered away in Pig Latin, a language that must have been intentionally invented by a group of friends, but survived as the best of the Dog Latin languages that pop up in English history. We also learned some sign language in school, a system that uses natural human movements and shapes them into a full language system (though, arguably, some might call this a “writing” system, like Braille: I was always confused why they had Braille on drive-thru bank machines but no sign language services at fast food drive-thrus).

As a young adult I got to travel through Israel and Greece. Israel is an intriguing study because Modern Hebrew is an attempt to reignite written Hebrew (from the Bible and religious texts) in normal, everyday life. Some call the language Israeli, not Hebrew, because it has Yiddish, German, Russian, and English influences, but it has been a pretty successful project. I remember learning Hebrew in grad school, and remembering that they have some newspapers in Jerusalem with vowel pointing to help non-native learners like me.

Greece, too, is the home of a renaissance language, where twice in history (in the Patristic church and later in the modern period) they tried to capture the greatness of classical Greek. I quite like Koine—the common Greek that the New Testament and other Roman era documents are written in. Koine itself is the simplification of Greek after Alexander the Great conquered the Mediterranean. It seems that, even then, people struggled with all those case endings—the kinds of inflections that English lost as it moved past the Middle English period (though other Germanic tongues kept them). Even with only four (and a half) cases instead of the 8 classical cases, my students struggle with Koine. 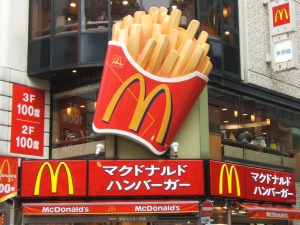 Living in Japan was a real treat for language development. They have three main writing systems: Katakana for foreign words, Hiragana for local words and childhood language development, and Chinese characters (Kanji, which is often misprinted on super cool tattoos). Katakana is great fun as Japan is a bright, international culture taking in many English words, but based on a syllabary language pronounced phonemically rather than alphabetically. Thus, for McDonalds, you get “Makudonaludo.” My name is close: “Burenton” (because the “n” or “ng” sound is an in-breath sound, thus an exception). But listening to English spoken in Japan is a real treat—plus, there are super cool Engrish signs and t-shirts.

Beyond the writing system, Japan has social layers to their language. After a couple of years there, I discovered that there were languages of social conversation, ritual, and intimacy. Unfortunately, I only got to learn the first two, and only basically.

So language is a dynamic, living, complex, organic, unpredictable thing. My own language path—which I hope to extend into medieval languages in the 2020s—shows the combination of living, constructed, and partly constructed language experiences.

There is an element of language development that Tolkien thought was critical but is missing in this little survey and in much of the language research—and one that grounded my childhood reading. In a 14 Jan 1956 letter to an unknown Mr. Thompson, Tolkien identified a link that is critical to the experience of language:

[The Lord of the Rings] has been a considerable labour, beginning really as soon as I was able to begin anything, but effectively beginning when I was an undergraduate and began to explore my own linguistic aesthetic in language composition. It was just as the 1914 War burst on me that I made the discovery that ‘legends’ depend on the language to which they belong; but a living language depends equally on the ‘legends’ which it conveys by tradition. (For example, that the Greek mythology depends far more on the marvelous aesthetic of its language and so of its nomenclature of persons and places and less on its content than people realize, though of course it depends on both. And vice versa. Volapük, Esperanto, Ido, Novial, &c &c are dead, far deader than ancient unused languages, because their authors never invented any Esperanto legends.) So though being a philologist by nature and trade (yet one always primarily interested in the aesthetic rather than the functional aspects of language) I began with language, I found myself involved in inventing ‘legends’ of the same ‘taste’. The early work was mostly done in camps and hospitals between 1915 and 1918 – when time allowed. But I think a lot of this kind of work goes on at other (to say lower, deeper, or higher introduces a false gradation) levels, when one is saying how-do-you-do, or even ‘sleeping’. I have long ceased to invent (though even patronizing or sneering critics on the side praise my ‘invention’): I wait till I seem to know what really happened. Or till it writes itself.

It might be tempting to spend some time thinking about that “discovery” process of writing—how true to life that is for me if not for others. But, for Tolkien, the fruit of discovery is found in the soil of language. The stories and languages rhyme, but they are for Tolkien linguistically driven.

Though Tolkien may have over-predicted the death of Esperanto, I think he is fundamentally correct about what makes a language really live. Volapük was invented by Father Johann Martin Schleyer, when God told him in a dream that he was to make an international language. While there are very few speakers today, as many as a million people may have spoken Volapük before its constructed linguistic arch-nemesis, Esperanto, swept in and turned the word nerds in a new direction. Even without the competitor, though, the language was choked by its own idea-bed. Father Schleyer retained proprietary rights to the language, and when it comes to words people vote with their feet. Ido, an Esperanto variant, also fell because of human control. Novial, a Germanic version of a constructed language, disappeared with the founder’s death. 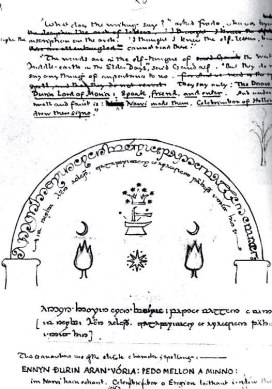 It’s possible that some of these languages may remain. There are 180,000 Wikipedia articles in Esperanto, and 120,000 in Volapük (though the latter are mainly AI generated). It could be that the technological globalism we are a part of may create a space for constructed language. But I don’t think so. Humans require story and ritual to seal in their questions, languages, intimacies, and art. Ritual is the home experience of learning a language that Tolkien underestimated, but he got the story bit right. I believe that we are storied beings, and Tolkien understood something about human nature that these linguistic neo-geniuses missed.

What does the future look like? Newspeak is an invented language that will emerge on its own in certain kinds of contexts. Will Quenya catch on and naturalize? Who knows? It is certainly embedded in stories that are worth telling. And there is no telling where things may go. Parseltongue may become a real thing and some serpentine cyborg culture of the future may use it. But it is likely we could never predict it. Languages will continue to hop, skip, and jump into the future as they always have, embedded in the rituals (intimacy) and stories (art) of everyday life.

“A Pilgrim in Narnia” is a blog project in reading and talking about the work of C.S. Lewis, J.R.R. Tolkien, and the worlds they touched. As a "Faith, Fantasy, and Fiction" blog, we cover topics like children’s literature, apologetics and philosophy, myths and mythology, fantasy, theology, cultural critique, art and writing. This blog includes my thoughts as I read through Lewis and Tolkien and reflect on my own life and culture. In this sense, I am a Pilgrim in Narnia--or Middle Earth, or Fairyland. I am often peeking inside of wardrobes, looking for magic bricks in urban alleys, or rooting through yard sale boxes for old rings. If something here captures your imagination, leave a comment, “like” a post, share with your friends, or sign up to receive Narnian Pilgrim posts in your email box. Brenton Dickieson is a father, husband, friend, university lecturer, and freelance writer from Prince Edward Island, Canada. You can follow him on Twitter, @BrentonDana.
View all posts by Brenton Dickieson →
This entry was posted in Reflections and tagged Esperanto, German, Greek, Harry Potter, Israel, Japan, Klingon, language, Newspeak, Pig Latin, Quenya, Russian, Volapük, Yiddish. Bookmark the permalink.