A Timeline for the Creation of Narnia

Posted on September 13, 2018 by Brenton Dickieson

Yesterday I shared some Press Association news about a new C.S. Lewis letter that popped up in a Lewis Facebook discussion groups. It really is a neat letter and a great opportunity to see Lewis’ handwriting when he is writing for children (and, thus, it is almost legible).

This “Grittleton House Letter” is a response to kids’ fan letters, and there are a couple of Narnian firsts revealed in the text. This 22 May 1952 letter is the first (and only?) time Lewis uses the title, The Chronicles of Narnia. It is also the first time that Lewis indicates he has seven Chronicles in view, and has all but The Last Battle sketched out. Lewis takes time to describe The Magician’s Nephew (MN) in some detail for the first time, which is really quite a nice addition. Lewis wrote “fifth book” and crossed out “fifth” and substituted “sixth.” Is this just a normal error Lewis makes with numbers, or is Lewis right at this moment securing the future release schedule of Narnian stories? I don’t know, but it will be almost exactly a year later before The Last Battle (LB) is finished in draft form. Is Lewis expecting too much when he suggests the children should have seen the Professor’s role coming? I don’t know, but by May 1952 the links are all there for Lewis (except maybe the Narnian apocalypse).

I decided this was a good chance to update (and publish) my “Timeline for the Creation of Narnia.” Actually, my own personal timeline is a little different because, as I discuss in “On a Picture by Chirico: A Proposal about the Creation of Narnia,” I suspect that Lewis was working on the characters of The Magician’s Nephew in 1948 before Narnia began to bubble up in his imagination. My suspicion about The Magician’s Nephew comes from reading the LeFay Fragment, and remembering that in 1948 and early 1949 Lewis is writing poetry of talking horses, creation stories, pictures of Eden, and civilizational apocalypses (all things in The Magician’s Nephew). When the Digory story fails to come and “Aslan came bounding in,” the LeFay Fragment was set aside and Lewis fairly quickly wrote and rewrote The Lion, the Witch and the Wardrobe (LWW). This means that I have some doubt about the precision of Roger Lancelyn Green’s dating of each Narnian step. However, Green was a critical factor in both the creation of Narnia and its publication so I have left my speculative theory off this published timeline.

The main sources are Lewis’ Collected Letters (edited by Walter Hooper), Hooper’s Companion and Guide, the C.S. Lewis biography by Green and Hooper, Hooper’s Past Watchful Dragons, and manuscripts that have been published in the last decade. Joel Heck’s “Chronology” is a great source for bringing it all together, though I differ here on a couple of tiny points.

Do you see any errors in this timeline? What about things that should be added or taken away? At this point I see this as a public document that you can take and do whatever you want with. I hope to add footnotes later when I have time, just like I hope to visualize it in an infographic. I also apologize if anyone else has done this (and no doubt done it better): I simply haven’t found another example.

I have tried to make this timeline as thin as possible, including only:

Unfortunately, we don’t have all the information that we might want about how long Lewis took to actually write each book. It looks like LWW came together in 2.5-3 months once Lewis got going, while it took 7 or 8 years for MN to go from first glimpse to final print. Like LWW, it looks like Prince Caspian (PC) took 2.5-3 months to write, though we don’t know precisely how long The Voyage of the Dawn Treader (VDT) took. If Lewis finished PC in late December 1949, he may have written VDT in only 7-8 weeks (complete by 21 Feb 1950). Again, if we imagine that Lewis wrote his first four chronicles one after the other, then The Horse and His Boy (HHB) may have taken five months. However, Lewis didn’t usually write a lot in term because of the workload. It is more likely Lewis began HHB in mid-March after Hilary Term was closed, or even at the close of Trinity Term in mid-June. If that’s the case, HHB may have taken as few as 5 weeks. Given the breeziness of the tale and (I think) Lewis’ love of it, I wouldn’t be surprised if HHB was written that quickly. 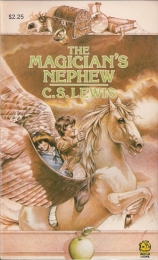 In any case, that means that we have 15 months from the time that LWW was first read aloud to the completion of the 4th complete story (with ideas about MN kicking around in there). That is quite a feat, especially considering that Lewis was hospitalized for exhaustion in this period, a stress that was heightened by Warren Lewis’ alcoholic binges and Mrs. Moore’s increasing needs in terminal illness. In any case, after four quick volumes it is 9 months before The Silver Chair (SC) appears, in March 1951. Green has the manuscript (MS.) of SC almost 8 weeks after Mrs. Moore dies, which matches the timeline we have intimated (of 5-12 weeks per story). However, SC is a more complex story, more philosophical and intertextually layered than HBB—and darker. I suspect that SC was begun earlier, perhaps in December 1951 after Michaelmas Term was complete. However long each one took to write, we have 5 chronicles in 2 years.

After SC was penned, Lewis tried to return to MN. He tells Green in May 1951 that he is working on the story, and 31 Oct 1951 Green has a version of it. Lewis officially began his sabbatical to work on his 16th-century literature book (OHEL) in October 1951, though functionally it began as Trinity Term closed in mid-June. When did Lewis write MN during that time? Was Green reading the final edition in October or a story Lewis worked on longer? We have almost no information about MN until we hear it went to the publisher 2.5 years later, March 1954. The new Grittleton House letter tells us that the story that we have published was in place in May 1952, meaning that MN may not have been as difficult for Lewis as I had previously thought.

In 1952 Lewis finished OHEL and began indexing it, edited Warren Lewis’ The Splendid Century, and edited Mere Christianity. In September 1952 he first meets Joy Davidman. While she certainly brings energy and delight, her presence means that Lewis is struggling at Christmastime 1952 to complete LB (which was not yet sketched out in May). Between a return to the classroom at Magdalen College, Oxford, and his discovery of friendship with Joy, however, LB is begun in late 1952 and complete in some form by 2 Mar 1953. We don’t know the editorial process of most of the books, but like MN, there is a more extended editorial with copies going to Lewis’ primary reader, Green, in Spring 1953 and Winter 1954.

Still, with this Grittleton House letter and a revised timeline we can confirm that from the time Lewis read from LWW to Roger Lancelyn Green to the time he finished his first draft of LB was just shy of 4 years (10 Mar 1949 to 2 Mar 1953). It was a remarkable achievement, and we see that Lewis wrote prolifically while under the most pressure, but was also very fruitful when given the time to do his work.

“A Pilgrim in Narnia” is a blog project in reading and talking about the work of C.S. Lewis, J.R.R. Tolkien, and the worlds they touched. As a "Faith, Fantasy, and Fiction" blog, we cover topics like children’s literature, apologetics and philosophy, myths and mythology, fantasy, theology, cultural critique, art and writing. This blog includes my thoughts as I read through Lewis and Tolkien and reflect on my own life and culture. In this sense, I am a Pilgrim in Narnia--or Middle Earth, or Fairyland. I am often peeking inside of wardrobes, looking for magic bricks in urban alleys, or rooting through yard sale boxes for old rings. If something here captures your imagination, leave a comment, “like” a post, share with your friends, or sign up to receive Narnian Pilgrim posts in your email box. Brenton Dickieson is a father, husband, friend, university lecturer, and freelance writer from Prince Edward Island, Canada. You can follow him on Twitter, @BrentonDana.
View all posts by Brenton Dickieson →
This entry was posted in Reflections and tagged books, C.S. Lewis, lion the witch and the wardrobe, Narnia, Prince Caspian, Roger Lancelyn Green, The Chronicles of Narnia, The Horse and His Boy, The Last Battle, The LeFay Fragment, The Magician's Nephew, The Silver Chair, Voyage of the Dawn Treader, Walter Hooper, writing. Bookmark the permalink.

23 Responses to A Timeline for the Creation of Narnia