Posted on October 15, 2018 by Brenton Dickieson

In the great Cathedrals, art is hidden everywhere in plain sight. At the Chester Cathedral yesterday morning, I was able find tiny busts and secret gargoyles and subtle shades of art in every alcove. Even below my feet in the paving stones, I saw that someone had scratched into the stone a compass that suggests (controversially) that the cruciform shape of the cathedral does not sit on a perfect North-South axis (Google Maps also makes this suggestion). The cathedral quire is filled in intricate wood carvings, and one can find etchings, carvings, paintings, sculptures, and living arts of music and ecology everywhere.

nd there are, of course, the stained glass windows. A feature of most old churches, this ancient art creates a story for the community in brilliant colours, often drawing on biblical themes and Christian history for the edification, education, and entertainment of churchgoers. This past Sunday one of Chester’s cloister unwindows stopped me up short.

There was St. Denis of Paris in Bishop’s robes attended to by angels and … carrying his own head.

Like I’m sure everyone working on postgraduate studies in religion, I immediately thought of the Headless Hunt in Harry Potter and the Chamber of Secrets. Just that day I happened to be reading of Nearly Headless Nick’s continued woes. Readers will remember how Sir Nicholas de Mimsy-Porpington faced continued persecution by the truly beheaded undead. Despite being “hit forty-five times in the neck with a blunt axe,” Sir Nicholas’ head failed to fully vacate his torso, leaving a small bit of skin that held his head in place.

As a result, in his afterdeath Sir Nicholas was forever known as “Nearly Headless Nick.” And because he was only partially decapitated, Nick’s application to join the Headless Hunt was continually denied. The eighth chapter of Chamber Secrets includes the letter of Nick’s most recent rejection:

We can only accept huntsmen whose heads have parted company with their bodies. You will appreciate that it would be impossible otherwise for members to participate in hunt activities such as Horseback Head-Juggling and Head Polo. It is with the greatest regret, therefore, that I must inform you that you do not fulfill our requirements.
With very best wishes,
Sir Patrick Delaney-Podmore

This was the scene that was running through my head as I looked at the window of “Saint Denys” (Brits love substituting y-s when a perfectly good i will do). Next to the window was a large pencil sketch, what the original artist of the window called a “cartoon” (perhaps an unintentionally clever choice of words, given the etymological links of “cartoon” with the root of “cartography”). The sketch was used as the guide for glaziers to proportion the window, no doubt a delicate procedure. In its ongoing outreach in arts and history, Chester Cathedral has made a little exhibit to show the process of creating such a longlasting work of art (all of the pictures are at the bottom of this post).

This artistic gem led me to discover an entire category of martyr that I had no idea existed, cephalophores, literally “head-bearers.” St. Denis’ story of martyrdom is pretty peculiar. Pressed by the Romans to cease his preaching, the bishop of Paris was finally made an example of in Rome’s typically delicate way of dealing with problems. After refusing to be silent, Denis was decapitated on Montmartre (that is Mars Hill, not Mount of Martyrs). Then–and usually after being decapitated there is not a “then”–then Denis picked up his head and walked six miles to his burial place, preaching a sermon of repentance as he went along. 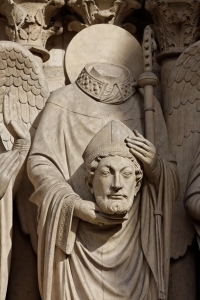 Beyond the convenience of having the corpse deal with his own transport–Jesus’ admonition to let the dead bury their own dead comes to mind–Denis’ homiletic headless journey had a dramatic effect. A whole class of cephalophoric martyrs have appeared, head in hands, in Christian history.

It stricks me, then, that J.K. Rowling’s Headless Hunt and Sir Nicholas’ sad exclusion has an interesting history behind it. Within the great cloud of witnesses are the martyrs who have gone before us, men and women whose lives were so patterned on the cross that they protected not even their own lives. Yet within the company of martyrs is a special class of saints, the cephalophores, who found that their inauspicious beheading turned out to be a minor interruption in the prayer, psalm, sermon, or prophetic warning that was on their lips as they died.

So there seems to be good historical reason to exclude Nearly Headless Nick from the Headless Hunt. The Hunt is made up of cephalophores and (if I can coin a term) cephalagons, people who use their heads (quite literally) in the field of action. Clearly Nick doesn’t fit. But I do feel a little badly for Sir Nicholas, who isn’t a bad house ghost after all.

Nearly Headless Nick now drifted toward them through the crowd.
“Enjoying yourselves?”
“Oh, yes,” they lied.
“Not a bad turnout,” said Nearly Headless Nick proudly. “The Wailing Widow came all the way up from Kent. … It’s nearly time for my speech, I’d better go and warn the orchestra. …”
The orchestra, however, stopped playing at that very moment. They, and everyone else in the dungeon, fell silent, looking around in excitement, as a hunting horn sounded.
“Oh, here we go,” said Nearly Headless Nick bitterly.
Through the dungeon wall burst a dozen ghost horses, each ridden by a headless horseman. The assembly clapped wildly; Harry started to clap, too, but stopped quickly at the sight of Nick’s face.
The horses galloped into the middle of the dance floor and halted, rearing and plunging. At the front of the pack was a large ghost who held his bearded head under his arm, from which position he was blowing the horn. The ghost leapt down, lifted his head high in the air so he could see over the crowd (everyone laughed), and strode over to Nearly Headless Nick, squashing his head back onto his neck.
“Nick!” he roared. “How are you? Head still hanging in there?”
He gave a hearty guffaw and clapped Nearly Headless Nick on the shoulder.
“Welcome, Patrick,” said Nick stiffly.
“Live ’uns!” said Sir Patrick, spotting Harry, Ron, and Hermione and giving a huge, fake jump of astonishment, so that his head fell off again (the crowd howled with laughter).
“Very amusing,” said Nearly Headless Nick darkly.
“Don’t mind Nick!” shouted Sir Patrick’s head from the floor. “Still upset we won’t let him join the Hunt! But I mean to say — look at the fellow —”
“I think,” said Harry hurriedly, at a meaningful look from Nick, “Nick’s very — frightening and — er —”
“Ha!” yelled Sir Patrick’s head. “Bet he asked you to say that!”
“If I could have everyone’s attention, it’s time for my speech!” said Nearly Headless Nick loudly, striding toward the podium and climbing into an icy blue spotlight.
“My late lamented lords, ladies, and gentlemen, it is my great sorrow …”
But nobody heard much more. Sir Patrick and the rest of the Headless Hunt had just started a game of Head Hockey and the crowd were turning to watch. Nearly Headless Nick tried vainly to recapture his audience, but gave up as Sir Patrick’s head went sailing past him to loud cheers

“A Pilgrim in Narnia” is a blog project in reading and talking about the work of C.S. Lewis, J.R.R. Tolkien, and the worlds they touched. As a "Faith, Fantasy, and Fiction" blog, we cover topics like children’s literature, apologetics and philosophy, myths and mythology, fantasy, theology, cultural critique, art and writing. This blog includes my thoughts as I read through Lewis and Tolkien and reflect on my own life and culture. In this sense, I am a Pilgrim in Narnia--or Middle Earth, or Fairyland. I am often peeking inside of wardrobes, looking for magic bricks in urban alleys, or rooting through yard sale boxes for old rings. If something here captures your imagination, leave a comment, “like” a post, share with your friends, or sign up to receive Narnian Pilgrim posts in your email box. Brenton Dickieson is a father, husband, friend, university lecturer, and freelance writer from Prince Edward Island, Canada. You can follow him on Twitter, @BrentonDana.
View all posts by Brenton Dickieson →
This entry was posted in Thoughtful Essays and tagged cephalophores, Chester, Chester Cathedral, Harry Potter and the Chamber of Secrets, Headless Hunt, J.K. Rowling, John Cleese, martyrdom, martyrology, Nearly Headless Nick, Saint Denis. Bookmark the permalink.

43 Responses to Is Saint Denys in the Headless Hunt? Martyr Legends and Nearly Headless Nick’s Fate