Christopher Tolkien, Curator of Middle-earth, Has Died, and a Letter from His Father

Posted on January 17, 2020 by Brenton Dickieson

As last evening tilted towards nighttime in my part of the world, my social media feeds began filling with the news that Christopher Tolkien had died. The last living Inkling, Christopher John Reuel Tolkien (21 Nov 1924 to 15 Jan 2020), may well have been merely an interesting historical note, a minor scholar or writer always overshadowed by his father, J.R.R. Tolkien. And while it is true that his father was the subcreative genius of a vast, sweeping legendarium associated with the bestselling Lord of the Rings, Christopher Tolkien grew to become the literary curator of that world. 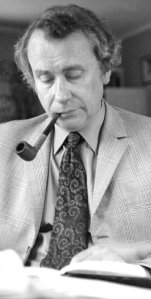 For this gift to us, the lovers of Middle-earth and fans of Tolkien’s linguistically rooted mythic worlds, we are ever grateful. Whereas many estates would have been content to leave the bulk of the author’s “unfinished tales” incomplete, Christopher Tolkien left behind a world of medieval scholarship to prepare his father’s papers for the world. This began with some translation work and The Silmarillion in the mid-1970s–with some help from Canadian author Guy Gavriel Kay–and continued at the pace of about a book every year or two (though a pace that slackened in the last half of this period. This list is not complete, leaving out indices, alternate editions, and the like. But it gives a sense of Christopher Tolkien’s work:

There is more archival work tucked away in theses and other published papers, as well as major works by folks like Verlyn Flieger, Dimitra Vice and Andrew Higgins, and Michael Drout. But our debt is greatest to Christopher, who worked tirelessly from his father’s death until his mid-90s to bring this material to the world. I suppose Christopher Tolkien’s work began long before the 1970s, starting with his first job as an editor–a young man looking for errors in The Hobbit for a bit of pocket money! After that, there were maps to draw (see below) and discussions with the Inklings (see below) or at home or through letters. It is not often that we can speak of a lifetime of work with such fine results. 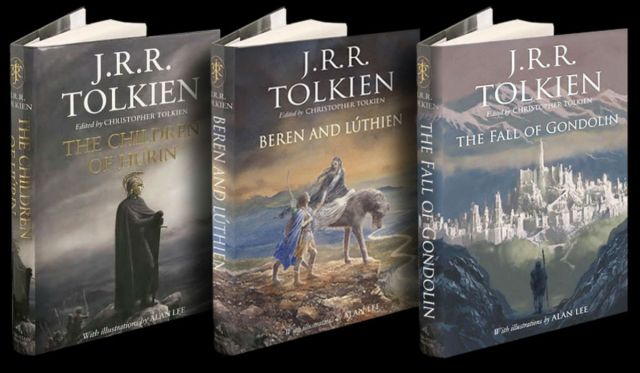 I have not read all of this material yet, but I will do so if the Lord tarries. And at 95 years old, lovers of Tolkien’s worlds have benefited from the long life, sharp eye, and steady hand of Christopher Tolkien–the custodian, guardian, conservator, gift-giver, and curator of Middle-earth. I don’t know who will follow, if anyone can, or what there is to come. But my life is richer for Christopher Tolkien’s work.

Given that one of the last edited volumes was the much anticipated Beren and Lúthien, I thought it would be nice to include the “Lúthien letter”–a note that J.R.R. Tolkien sent to his son, Christopher, about a year before he died. It is a mix of melancholic nostalgia and fond memories with some hint of boyish glee that The Lord of the Rings continues to delight readers, and a little bit of regret. 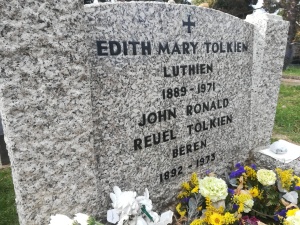 I have at last got busy about Mummy’s grave. …. The inscription I should like is:

: brief and jejune, except for Lúthien, which says for me more than a multitude of words: for she was (and knew she was) my Lúthien.*

July 13. Say what you feel, without reservation, about this addition. I began this under the stress of great emotion & regret – and in any case I am afflicted from time to time (increasingly) with an overwhelming sense of bereavement. I need advice. Yet I hope none of my children will feel that the use of this name is a sentimental fancy. It is at any rate not comparable to the quoting of pet names in obituaries. I never called Edith Lúthien – but she was the source of the story that in time became the chief pan of the Silmarillion. It was first conceived in a small woodland glade filled with hemlocks at Roos in Yorkshire (where I was for a brief time in command of an outpost of the Humber Garrison in 1917, and she was able to live with me for a while). In those days her hair was raven, her skin clear, her eyes brighter than you have seen them, and she could sing – and dance. But the story has gone crooked, & I am left, and I cannot plead before the inexorable Mandos. 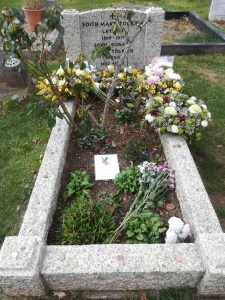 I will say no more now. But I should like ere long to have a long talk with you. For if as seems probable I shall never write any ordered biography – it is against my nature, which expresses itself about things deepest felt in tales and myths — someone close in heart to me should know something about things that records do not record: the dreadful sufferings of our childhoods, from which we rescued one another, but could not wholly heal the wounds that later often proved disabling; the sufferings that we endured after our love began – all of which (over and above our personal weaknesses) might help to make pardonable, or understandable, the lapses and darknesses which at times marred our lives — and to explain how these never touched our depths nor dimmed our memories of our youthful love. For ever (especially when alone) we still met in the woodland glade, and went hand in hand many times to escape the shadow of imminent death before our last parting.

15 July. I spent yesterday at Hemel Hempstead. A car was sent for me & I went to the great new (grey and white) offices and book-stores of Allen & Unwin. To this I paid a kind of official visitation, like a minor royalty, and was somewhat startled to discover the main business of all this organization of many departments (from Accountancy to Despatch) was dealing with my works. I was given a great welcome (& v.g. lunch) and interviewed them all from board-room downwards. ‘Accountancy’ told me that the sales of The Hobbit were now rocketing up to hitherto unreached heights. Also a large single order for copies of The L.R. had just come in. When I did not show quite the gratified surprise expected I was gently told that a single order of 100 copies used to be pleasing (and still is for other books), but this one for The L.R. was for 6,000.

*She knew the earliest form of the legend (written in hospital), and also the poem eventually printed as Aragorn’s song in LR. 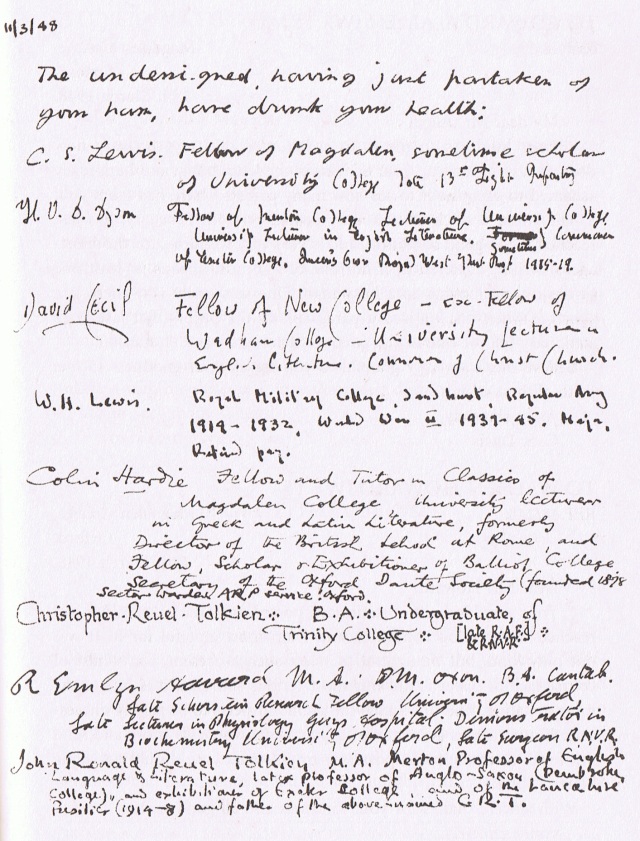 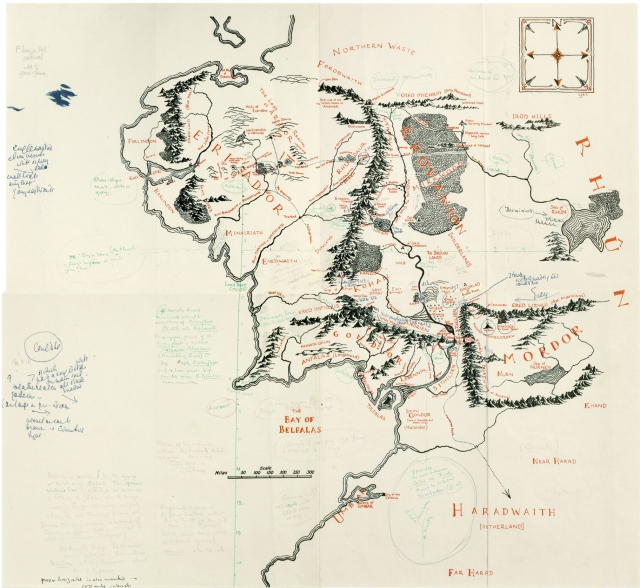 “A Pilgrim in Narnia” is a blog project in reading and talking about the work of C.S. Lewis, J.R.R. Tolkien, and the worlds they touched. As a "Faith, Fantasy, and Fiction" blog, we cover topics like children’s literature, apologetics and philosophy, myths and mythology, fantasy, theology, cultural critique, art and writing. This blog includes my thoughts as I read through Lewis and Tolkien and reflect on my own life and culture. In this sense, I am a Pilgrim in Narnia--or Middle Earth, or Fairyland. I am often peeking inside of wardrobes, looking for magic bricks in urban alleys, or rooting through yard sale boxes for old rings. If something here captures your imagination, leave a comment, “like” a post, share with your friends, or sign up to receive Narnian Pilgrim posts in your email box. Brenton Dickieson is a father, husband, friend, university lecturer, and freelance writer from Prince Edward Island, Canada. You can follow him on Twitter, @BrentonDana.
View all posts by Brenton Dickieson →
This entry was posted in Letters, News & Links and tagged archival research, Beren and Lúthien, Christopher Tolkien, Inklings, J.R.R. Tolkien, Middle Earth, The History of Middle-earth, The Hobbit, The Inklings, The Lord of the Rings, The Silmarillion, The Tale of Beren and Lúthien. Bookmark the permalink.

58 Responses to Christopher Tolkien, Curator of Middle-earth, Has Died, and a Letter from His Father