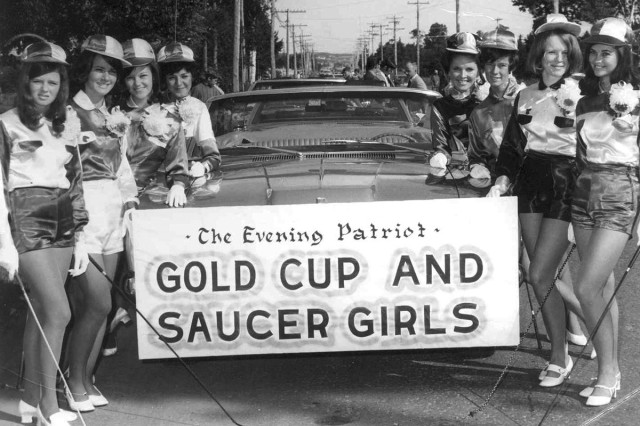 Tonight is the night for the famous Gold Cup & Saucer race in Charlottetown. Every summer, the stands at the track are packed with racing fans following a week of races and the Exhibition–everything you can imagine in a town fair. On Gold Cup night, the crowd sings the Island Hymn as the horses and drivers approach the field. After introductions of the field, horses and drivers make their way to the grandstand. At exactly two minutes to midnight, the call to the post is heard, and one of the most anticipated races in harness racing on the continent begins.

Sadly, tonight, there will be few fans and far less fan fair. It might be a record-breaking race, but COVID-19 has shut activities down at the Exhibition. It may or may not be the first time that Old Home Week has been cancelled since it began in 1888–it thrived during the wars and the Great Depression–but it is the first time in the Gold Cup & Saucer history that only horsemen and horsewomen will be there live to experience the race. 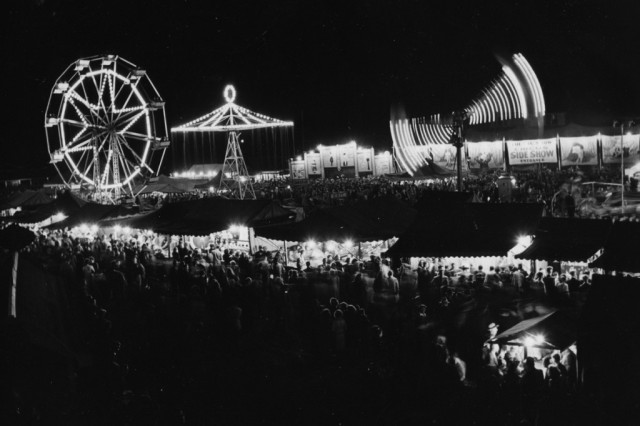 It was all cancelled this year–the rides, the games, the concerts, and the largest parade east of Montreal. As I was a 4H kid and our family bred show Holsteins, Old Home Week was an annual event for me. I loathed the cattle showing but loved the experience. A lot of it was a unique mix of smells, not all of them good, that mingled together to mean a few days of fun. The minty, pungent smell of manure, damp red sand, the tarry, oily smell of asphalt in a hard rain after days of drought, cigarette smoke and popcorn and engine grease, sunscreen and sweat and perfume. One of my favourite things as a child was to sleep in the cowbarn at night, to walk all the lanes of the Exhibition knowing I was on the inside, to ride the carnival rides until I was dizzy, to meet friends from across the Island, and to leave with my pockets lightened of summer cash.

One year, when I was in college, I was actually a featured guest for Gold Cup night. I was working as a professional clown at about the time of the video below. Someone local-famous–I have no recollection of who–was celebrating a birthday. Early in the evening, around dusk, I suited up as Patches the Clown and walked out to the winner’s circle with my guitar. Before 20,000 puzzled and amused race fans, I led the crowd in a rendition of the Hokey Pokey, and then everyone joined me for the singing of Happy Birthday. It was quite a night to end a week of Vaudeville revelry and launch Prince Edward Island’s biggest night of the year.

All of that attraction is lost for me as an adult, honestly–though I do like sometimes to walk the grounds in the late evening, just to see others having fun. My family sponsors a Holstein prize in honour of my late father and brother, so I occasionally find my way to the fair. 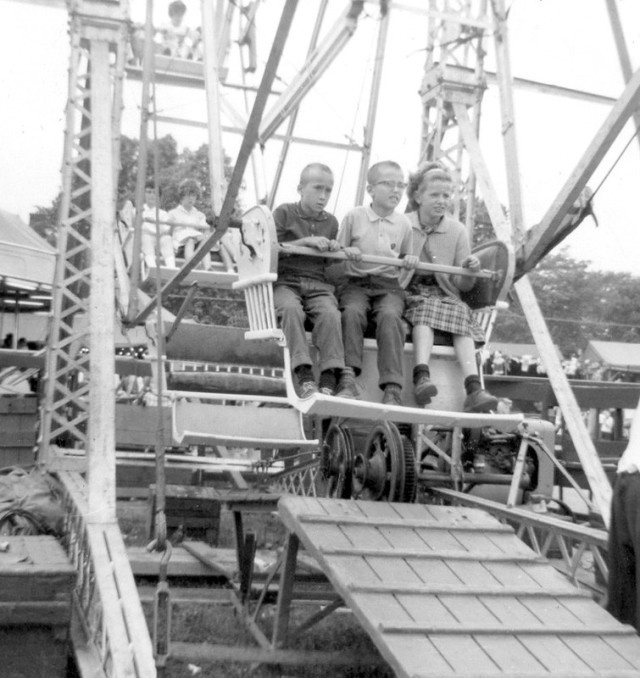 I think, though, that the Exhibition is best experienced through the eyes of a child–despite all of the adult events that take place each year. I have been reading Anne of Green Gables: The Original Manuscript, edited by Carolyn Strom Collins. It is a creative way to read the classic novel in a new way. This morning, on the Gold Cup day that isn’t what it was and the Old Home Week that isn’t at all, I came across Anne’s first experience of the Exhibition–a breathless, long paragraph of recollection to Marilla after Diana’s rich Aunt Barry hosts them in Charlottetown.

I think this piece from Anne of Green Gables is worth sharing, with hope for such discoveries in the future and the celebration of delight for today. Anne also offers an interesting bit of advice about life: Don’t do anything you can’t enjoy telling your minister’s wife about! 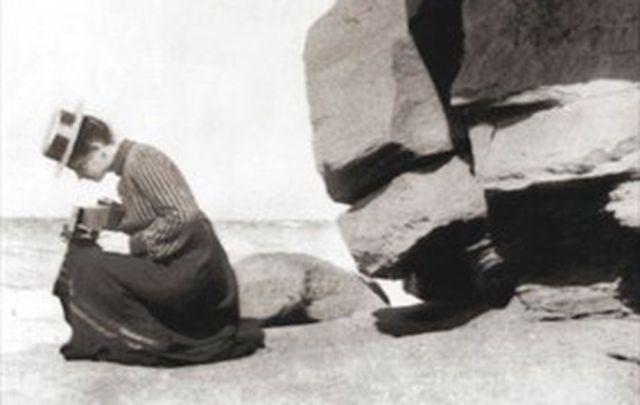 “It was splendid,” Anne related to Marilla later on. “I never imagined anything so interesting. I don’t really know which department was the most interesting. I think I liked the horses and the flowers and the fancywork best. Josie Pye took first prize for knitted lace. I was real glad she did. And I was glad that I felt glad, for it shows I’m improving, don’t you think, Marilla, when I can rejoice in Josie’s success? Mr. Harmon Andrews took second prize for Gravenstein apples and Mr. Bell took first prize for a pig. Diana said she thought it was ridiculous for a Sunday-school superintendent to take a prize in pigs, but I don’t see why. Do you? She said she would always think of it after this when he was praying so solemnly. Clara Louise MacPherson took a prize for painting, and Mrs. Lynde got first prize for homemade butter and cheese. So Avonlea was pretty well represented, wasn’t it? Mrs. Lynde was there that day, and I never knew how much I really liked her until I saw her familiar face among all those strangers. There were thousands of people there, Marilla. It made me feel dreadfully insignificant. And Miss Barry took us up to the grandstand to see the horse races. Mrs. Lynde wouldn’t go; she said horse racing was an abomination and, she being a church member, thought it her bounden duty to set a good example by staying away. But there were so many there I don’t believe Mrs. Lynde’s absence would ever be noticed. I don’t think, though, that I ought to go very often to horse races, because they are awfully fascinating. Diana got so excited that she offered to bet me ten cents that the red horse would win. I didn’t believe he would, but I refused to bet, because I wanted to tell Mrs. Allan all about everything, and I felt sure it wouldn’t do to tell her that. It’s always wrong to do anything you can’t tell the minister’s wife. It’s as good as an extra conscience to have a minister’s wife for your friend. And I was very glad I didn’t bet, because the red horse did win, and I would have lost ten cents. So you see that virtue was its own reward. We saw a man go up in a balloon. I’d love to go up in a balloon, Marilla; it would be simply thrilling; and we saw a man selling fortunes. You paid him ten cents and a little bird picked out your fortune for you. Miss Barry gave Diana and me ten cents each to have our fortunes told. Mine was that I would marry a dark-complected man who was very wealthy, and I would go across water to live. I looked carefully at all the dark men I saw after that, but I didn’t care much for any of them, and anyhow I suppose it’s too early to be looking out for him yet. Oh, it was a never-to-be-forgotten day, Marilla. I was so tired I couldn’t sleep at night. Miss Barry put us in the spare room, according to promise. It was an elegant room, Marilla, but somehow sleeping in a spare room isn’t what I used to think it was. That’s the worst of growing up, and I’m beginning to realize it. The things you wanted so much when you were a child don’t seem half so wonderful to you when you get them.” 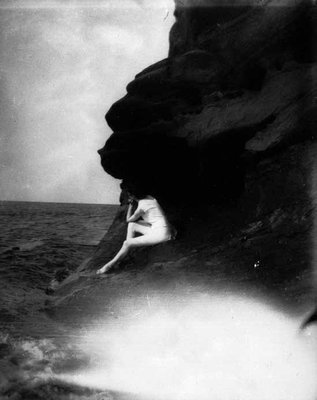 “A Pilgrim in Narnia” is a blog project in reading and talking about the work of C.S. Lewis, J.R.R. Tolkien, and the worlds they touched. As a "Faith, Fantasy, and Fiction" blog, we cover topics like children’s literature, apologetics and philosophy, myths and mythology, fantasy, theology, cultural critique, art and writing. This blog includes my thoughts as I read through Lewis and Tolkien and reflect on my own life and culture. In this sense, I am a Pilgrim in Narnia--or Middle Earth, or Fairyland. I am often peeking inside of wardrobes, looking for magic bricks in urban alleys, or rooting through yard sale boxes for old rings. If something here captures your imagination, leave a comment, “like” a post, share with your friends, or sign up to receive Narnian Pilgrim posts in your email box. Brenton Dickieson is a father, husband, friend, university lecturer, and freelance writer from Prince Edward Island, Canada. You can follow him on Twitter, @BrentonDana.
View all posts by Brenton Dickieson →
This entry was posted in Reflections and tagged Anne of Green Gables, Anne of Green Gables: The Original Manuscript, Carolyn Strom Collins, COVID-19, Gold Cup & Saucer, L.M. Montgomery, Lucy Maud Montgomery, Old Home Week, Prince Edward Island. Bookmark the permalink.