Posted on November 8, 2021 by Brenton Dickieson

It isn’t often that I get a popular novel as it first finds its way into the world. I’m usually years behind in my TBR and motivated to find new books by book clubs and upcoming classes and film adaptations. For example, I hear there’s an Amazon Prime series on this hot new fantasy book cycle, The Wheel of Time. I’m only 14 books behind and 30 years late, apparently, so I just grabbed Eye of the World from a community mini-library.

Publishers sometimes send me knew Inklings Studies materials, and I do place an order at my local bookstore for some Canadian lit authors I know, like Mark Sampson and Rebecca Rosenblum. I am pleased to have just picked up (a past student) Olivia Robinson’s gorgeous new novel published by Breakwater Books, Blue Moth Motel. Ahd I got Margaret Atwood‘s Handmaid’s Tale sequel, The Testaments, when it was new because it came with a live local discussion. Generally, though, my books come to me through trades with friends, used bookstores, and late-in-the-game orders. 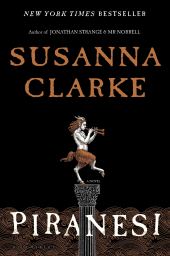 I have here, though, a beautifully designed hardback copy of Piranesi, Susanna Clarke’s long-awaited novel. Clarke is the author of the vivid, game-changing 2004 novel, Jonathan Strange & Mr Norrell. Strange & Norell is a Regency-era fantasy, the perfect mash for out-of-the-closet Jane Austen + sf lovers like myself. Crossing the genre and literary fiction divide, it was longlisted for the 2004 Man Booker Prize and won the 2005 Hugo Award for Best Novel–as well as the World Fantasy Award, the Locus, and the Mythopoeic Award for Adult Lit. Jonathan Strange & Mr Norrell is one of the books of the decade.

And initial signs are good for Piranesi. What particularly drew me to this book is that Clarke is attempting some experiments in fantasy writing. Piranesi has a significant connection to C.S. Lewis’ Narnian prequel, The Magician’s Nephew, with a quote from the pathetically nefarious Uncle Andrew in the epigraph. And in an interview by Sarah Lothian of the Church Times, Clarke notes a significant link to another Inkling, Owen Barfield. Barfield’s philosophical treatments of the evolution of language–captured in philosophical books like Poetic Diction and Saving the Appearance, or more popularly in things like History in English Words–is one of the critical unseen influences that binds together the work of J.R.R. Tolkien and C.S. Lewis. Barfield’s imaginative philosophies also seem to be the core material for a literary experiment by one of the 21st-century’s most important speculative fiction writers, Susanna Clarke.

The reason I have this copy of Piranesi, though–a hot-off-the-press hardcover, no less–is because I am once again joining the Signum University Hugo Award Best Novel Roundtable. In a gala zoom event that no doubt will rival the Worldcon ceremony in DC, six Signum friends will gather to discuss The 2020 Hugo Novel nominations, which this year includes six women authors:

This is the second year in a row where women have dominated the list. And, once again, though there is a bit of genre-bending, Science Fiction has a strong showing, with Tor/Solaris leading the pack as publishers. This is not unusual, as SciFi books have dominated through the decades, except, perhaps, during the first decade of this century, where the Harry Potter effect saw a shift in focus. As fantasists, Rowling was joined then by folks like George R.R. Martin, Neil Gaiman, and Susanna Clarke. My reading will tell whether the much shorter and more experimental Piranesi captures that unique, world-opening, character-centred dynamic that made Strange & Norrell so important.

Clarke is not the only veteran in the crowd. Rebecca Roanhorse’s Trail of Lightning was nominated in 2019, and Tamsyn Muir’s previous novel in the same series, Gideon the Ninth, was nominated last year. Famously, N.K. Jemisin’s Inheritance trilogy won in three successive years (2015, 2016, 2017)—making her, I believe, the only author to have an entire trilogy win, the only author to win three years in a row, and one of only five writers who have three or more wins. The City We Became is Jemisin’s fifth nomination in the novel category. It has already won the Locus award, so it is definitely a novel to watch. However, even with Jemison—certainly a giant in the field of Science Fiction writing today—it would be unfortunate to count out Mary Robinette Kowal, whose The Calculating Stars kicked off the Lady Astronaut series with a Hugo win in 2019. 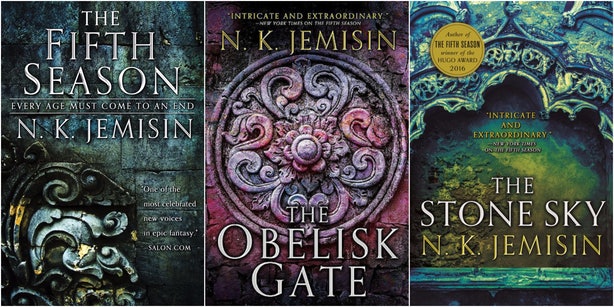 On the surface of things, Martha Wells looks like the only rookie nominee in the novel category. However, Wells has been writing for decades, including a Nebula nomination in 1999 for The Death of the Necromancer and Hugo nominations and wins for novellas and book series. She has carefully shaped the Murderbot Diaries series that includes this year’s nominee, Network Effect—and has had the entire series nominated. On top of this, Network Effect is the novel that won the Nebula award earlier this year.

It really is a stellar set of books, if you can forgive the pun.

The 2021 Hugo Awards ceremonies will be on Dec 18th at DisCon III in Washington, DC. Ahead of the event, Signum University is hosting a panel discussion of the nominees. My job will be to represent Susanna Clarke’s Piranesi, not so much in a battle of books but a winsome argument about great storytelling. Last year, I was delighted to represent Alix E. Harrow’s The Ten Thousand Doors of January, a novel that did not win but was also nominated for the Nebula Award, the World Fantasy Award, the Mythopoeic Award, and the Locus Award in the category of Best First Novel. It’s a beautiful, evocative book, and I very much enjoyed last year’s Signum Roundtable.

Thus, in looking forward to December’s conversation, I am blogging through the Hugo novels, offering a review or thoughtful essay each week leading up to the convention. I hope you can join in as we read and talk about the leading speculative fiction of the past year! This week, we’ll look at Mary Robinette Kowal’s Lady Astronaut Universe, followed by Martha Wells’ Network Effect next week. 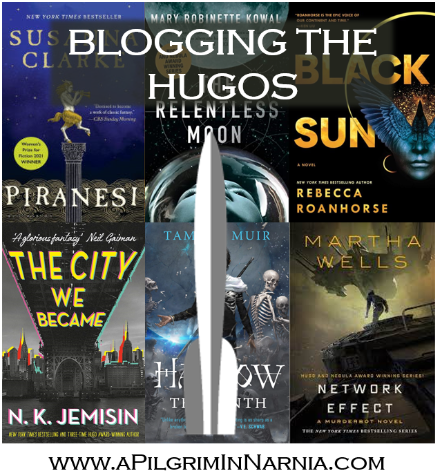 “A Pilgrim in Narnia” is a blog project in reading and talking about the work of C.S. Lewis, J.R.R. Tolkien, and the worlds they touched. As a "Faith, Fantasy, and Fiction" blog, we cover topics like children’s literature, apologetics and philosophy, myths and mythology, fantasy, theology, cultural critique, art and writing. This blog includes my thoughts as I read through Lewis and Tolkien and reflect on my own life and culture. In this sense, I am a Pilgrim in Narnia--or Middle Earth, or Fairyland. I am often peeking inside of wardrobes, looking for magic bricks in urban alleys, or rooting through yard sale boxes for old rings. If something here captures your imagination, leave a comment, “like” a post, share with your friends, or sign up to receive Narnian Pilgrim posts in your email box. Brenton Dickieson is a father, husband, friend, university lecturer, and freelance writer from Prince Edward Island, Canada. You can follow him on Twitter, @BrentonDana.
View all posts by Brenton Dickieson →
This entry was posted in Blogging the Hugos, Fictional Worlds, News & Links, Reviews and tagged Black Sun, Canadian literature, Eye of the World, George R.R. Martin, Gideon the Ninth, Harrow The Ninth, Lady Astronaut Universe, Margaret Atwood, Mark Sampson, Martha Wells, Mary Robinette Kowal, N.K. Jemisin, Neil Gaiman, Network Effect, Piranesi, Rebecca Roanhorse, Rebecca Rosenblum, Robert Jordan, Science Fiction, Susanna Clarke, Tamsyn Muir, The City We Became, The Handmaid's Tale, The Testaments, Wheel of Time. Bookmark the permalink.