Posted on September 23, 2011 by Brenton Dickieson

Recently Pat Robertson has hit the media with a crazy statement. Some of you may not be surprised. When he’s not calling on American military to perform an assassination or suggesting that the gay pride parade in Orlando might be

the causative event that creates an earthquake or meteor, Pat Robertson is a mild-mannered Christian TV superstar. He is a remarkably quotable American fundamentalist, and his most recent comments about marriage and alzheimers has really caused a pundit firestorm.

You can view the link here, but the advice that Robertson gives to a husband whose wife is “pretty much gone already” from the mental world seems to be that he should divorce her to see other people. People are in a fury that Robertson would suggest this, and this vacuous advice confirms our suspicion that Robertson and his friends have created an American consumer religion with a “me first” mentality that masquerades as conservative historic Christianity. It is certain that Robertson gives no thoughtful consideration of the gospel or political history when he comments on American policy, and his moral tirades sound more like octogenarian

indignation than intelligent biblical critique, so most see this offhanded divorce comment in the same light. What else should we expect from Pat Robertson, after all?

Of course what he said was not what people are actually presenting him as saying. He has been misquoted, misunderstood. In the letter he is responding to on air, the man with the wife disappearing to alzheimers has already begun dating someone. Robertson admits that it is a hard situation—it really is, considering the decade-long commitment that some family members show for a mentally disapparating loved one—and says that if he is seeing someone, he should divorce his wife first. He has a responsibility to take care of his wife, but he shouldn’t be dating while married.

While it looks like Robertson’s comments are the end result of an express-line religion (and I think it is), the media has really misunderstood him. No, what he actually said is far more callous and unloving than the media’s misrepresentation. What Robertson suggests is that love does not have the power to struggle through the most difficult of times. Whatever else Robertson misunderstands about the world—and there is a great deal he doesn’t get; this guy compassionately understands that a man will struggle with alzheimers in his home, but blames the Haiti earthquake on a pact with the devil—Robertson doesn’t understand love.

And what is more central to the gospel than love?

While C.S. Lewis wrote entire books that would critique Robertson’s understanding of love, I think Lewis’ daily life is the greatest testimony. When he was in his mid-fifties, he was literally surprised by Joy: he met an 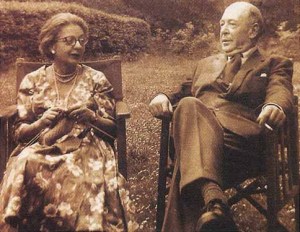 American woman named Joy Davidman who intrigued him, and he slowly fell in love. The context of his love, though, is what is interesting. She had divorced her abusive husband, and his Catholic friends really struggled with the romance. Tolkien, in particular, thought it was wrong, and Lewis didn’t even tell him that the wedding had happened for fear of hurting his friend “Tollers”.

More than just sacrificing Lewis’ friendships, though, Lewis knew that he was falling in love with love with a dying woman. In 1956, he wrote a letter to his friend, Mary, the American Lady:

I may soon be, in rapid succession, a bridegroom and a widower. There may, in fact, be a deathbed marriage. I can hardly describe to you the state of mind I live in at present—except that all emotion, with me, is periodically drowned in sheer tiredness, deep lakes of stupour. … I am marrying a very sick, and perhaps a dying woman. (63-64).

Lewis did marry the dying woman. An Anglican priest consecrated their union in a hospital and they prepared for a honeymoon of convalescence.

There was, however, a reprieve for Lewis and Davidman, Jack and Joy as they called each other. By some miraculous hand her cancer rapidly went into remission. Her bones slowly became stronger, while Lewis’ weakened from taking care of her. Jack Lewis, though, didn’t think his osteoporosis worsened because of lifting her. He literally thought that her healing was accompanied by the transference of some of her pain to him. Scientifically, that’s hard to demonstrate. But for Lewis, that was the essence of love: taking your Beloved’s pain upon yourself and sharing it with her. After all, that was what God did in Christ upon the cross, in Lewis’ mind, the pattern and fulfillment of all real love.

Alas, the love story did not last forever. After a couple of years of walks 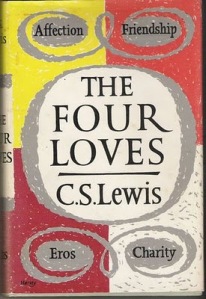 and talks, they finally took their honeymoon to Greece—a trip that was a dream come true for Joy. Not long after they returned from Greece, Joy’s cancer returned. She quickly deteriorated and died in 1960 after three years or marriage.

With Joy gone, Jack’s life became one of pain and misery and loss. For months, he stumbled around in a fog. He records his journey in a collection of journal entries called A Grief Observed. It is a sensitive and honest struggle with loss he felt so keenly.

While he couldn’t have predicted the pain he would experience at Joy’s loss, Lewis knew that marrying her meant facing great difficulties he had managed to avoid his entire life. But, given the chance to avoid the grief he so deeply experienced in Joy’s death, would he have? Would he have left the patient at her bedside, choosing to avoid falling in love?

That’s what Pat Robertson suggests. He suggests that the difficult way forward is not worth love’s risk. Or worse, Robertson believes that there is no love that can be completed and fulfilled at the bedside of a dying woman.

Here is where I think the very substance of our religions to be different, and where C.S. Lewis’ faith is more true to the centre of the gospel. For Robertson, it is more loving to scream at homosexuals or prevent immigrants from finding a home than it is for a husband to fulfill the vows he made to his wife. For Robertson, the legal rules about marriage are more important than the love therein. But Lewis lived an entirely different reality. He lived love, embracing the pain, sacrificing his life for his beloved.

“A Pilgrim in Narnia” is a blog project in reading and talking about the work of C.S. Lewis, J.R.R. Tolkien, and the worlds they touched. As a "Faith, Fantasy, and Fiction" blog, we cover topics like children’s literature, apologetics and philosophy, myths and mythology, fantasy, theology, cultural critique, art and writing. This blog includes my thoughts as I read through Lewis and Tolkien and reflect on my own life and culture. In this sense, I am a Pilgrim in Narnia--or Middle Earth, or Fairyland. I am often peeking inside of wardrobes, looking for magic bricks in urban alleys, or rooting through yard sale boxes for old rings. If something here captures your imagination, leave a comment, “like” a post, share with your friends, or sign up to receive Narnian Pilgrim posts in your email box. Brenton Dickieson is a father, husband, friend, university lecturer, and freelance writer from Prince Edward Island, Canada. You can follow him on Twitter, @BrentonDana.
View all posts by Brenton Dickieson →
This entry was posted in Reflections and tagged alzheimers, C.S. Lewis, conservative, controversy, culture, Death, evangelical, evangelical controversy, fundamentalist, gay pride parade, Letters to an America Lady, love, marriage, Pat Robertson, sacrifice, Tolkien. Bookmark the permalink.