We’ll Have a Gay Old Time, or Why New Bible Translations Are Needed 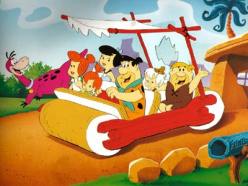 risingly nimble Stone Age construction worker with anger issues and his car crammed full with the kids, the pets, and the Rubbles. As they pull into the drive in theatre—remember them, movies that happened outside?—the snappy theme song ends with the jazz hands tag:

what ‘gay’ used to mean—at least I’m pretty sure it doesn’t. Although it could be that folks are a lot happier than they used to be, according to most polls, I suspect the language has moved on. One of the reasons I make this stunning observation is because of this hilarious scene from C.S. Lewis’ The Silver Chair. In the scenario, Jill Pole and Eustace Scrubb are trying to come up with a plan to escape a castle inhabited by giants who intend to make the children an Autumn Feast hors d’oeuvre. Their guide, a Marshwiggle aptly named Puddleglum, sees the negative side of everything and yet faces the world with depressing optimism. With great pains he tries to demonstrate 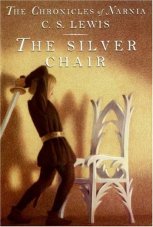 to the children the best way to fool the giants.

We must put them off their guard, though,” said Scrubb. “We must pretend we love being here and are longing for this Autumn Feast.” …

“I see,” said Jill. “We must pretend to be awfully excited about it, and keep on asking questions. They think we’re absolute infants anyway, which will make it easier.”

“Gay,” said Puddleglum with a deep sigh. “That’s what we’ve got to be. Gay. As if we hadn’t a care in the world. Frolicsome. You two youngsters haven’t always got very high spirits, I’ve noticed. You must watch me, and do as I do. I’ll be gay. Like this”—and he assumed a ghastly grin. “And frolicsome”—here he cut a most mournful caper. “You’ll soon get into it, if you keep your eyes on me. They think I’m a funny fellow already, you see….”

“All right. Gay’s the word,” said Scrubb. “Now, if we could only get someone to open this door. While we’re fooling about and being gay, we’ve got to find out all we can about this castle.”

Puddleglum’s sad gay lessons work surprisingly well, and Jill takes up the role and draws everyone in to her cutesy demeanour.

Jill [was] wonderful that day. As soon as the King and the rest of the hunting party had set off, she began making a tour of the whole castle and asking questions, but all in such an innocent, babyish way that no one could suspect her of any secret design. Though her tongue was never still, you could hardly say she talked: she prattled and giggled. She made love to everyone—the grooms, the porters, the housemaids, the ladies-in-waiting, and the elderly giant lords whose hunting days were past. She submitted to being kissed and pawed about by any number of giantesses, many of whom seemed sorry for her and called her “a poor little thing” though none of them explained why.

Before you get concerned about the nature of the material here, you should know that “made love” is another one of those phrases that seems to have changed a bit, and “kissing and pawing” are probably just 1950 words for fussing—at least, I hope they are.

You see, words change. My son didn’t pick up the shift in language as I read to him because I did a bit of ad hoc translating here and there, and he was really enjoying the suspense. But, frankly, it’s hard not to chuckle at the change in language.

We see this change, too, in Bibles. Anyone who’s grown up in a traditional church has probably giggled quietly in the pew at Balaam’s conversation with his ass. The obscurity of the King James language mounts to hilarity in this passage:

“Yet she multiplied her whoredoms, in calling to remembrance the days of her youth, wherein she had played the harlot in the land of Egypt. For she doted upon their paramours, whose flesh is as the flesh of asses, and whose issue is like the issue of horses” Ezekiel 23:19-20 (KJV).

As it turns out, “gay” even makes an appearance in the 1611 King James Bible:

“And ye have respect to him that weareth the gay clothing, and say unto him, Sit thou here in a good place” James 2:3 (KJV)

What would this even mean today? It would have to be a comment about metrosexual clothing, don’t you think? Even as much as I like guys in pants that don’t go all the way down to their shoes, though, this passage is actually a critique of people who give preferential treatment to the rich—a sort of 1st century homage to the Occupy movement rather than the fashion scene.

To counter the KJV Only crowd, Robert A. Joyner has collected a marvelous list of obsolete words in the King James Bible. But those that truly use only the King James must have special classes to study words like “bewray,” “emerods, and “neesing.” I suppose the further we get away from 1611, and the more our language changes, all we have to do is print off a handy dictionary and paste in the back of our leather-bound Authorized Versions.

But, I think that misses the point. Here is the actual original of James 2:3:

Exactly. Language changes, which is why we had the KJV in the first place–it was a beautiful update for Shakespeare’s generation. But the Bible was originally written in local languages—Hebrew, Aramaic, and a street market version of Greek—so that people could access the message easily. And when the language changed, faithful people translated it. As it turns out, most of the Old Testament quotations in the New Testament are from the Greek translation, not from the Hebrew original.

Language matters to God: local languages, not holy languages from the past. I remember picking up a Japanese Bible in Osaka once. I leafed through it, then handed it to a Japanese friend to ask what he thought. He looked at it, then passed it back to me. “I can’t read it,” he said. This relatively new translation was filled with archaic, obsolete language that sounds holy to the religious but is far away from the street market language 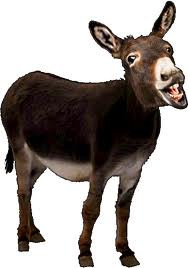 that most people speak. If we follow the New Testament pattern, “holy” language is always the vulgar, the everyday rhythms and words of the ancient marketplaces.

Now, before I am accused of participating in a “superfluity of naughtiness” (James 1:21, KJV), or being one of the “sottish children” of Jeremiah 4:22 (KJV) or the queer creatures in The Silver Chair, I do love the King James Bible. And anyone who studies English lit needs to know it well. But I think we should take seriously God’s love for culture and do a good job in translation. After all, it’s more than Balaam’s ass on the line.

“A Pilgrim in Narnia” is a blog project in reading and talking about the work of C.S. Lewis, J.R.R. Tolkien, and the worlds they touched. As a "Faith, Fantasy, and Fiction" blog, we cover topics like children’s literature, apologetics and philosophy, myths and mythology, fantasy, theology, cultural critique, art and writing. This blog includes my thoughts as I read through Lewis and Tolkien and reflect on my own life and culture. In this sense, I am a Pilgrim in Narnia--or Middle Earth, or Fairyland. I am often peeking inside of wardrobes, looking for magic bricks in urban alleys, or rooting through yard sale boxes for old rings. If something here captures your imagination, leave a comment, “like” a post, share with your friends, or sign up to receive Narnian Pilgrim posts in your email box. Brenton Dickieson is a father, husband, friend, university lecturer, and freelance writer from Prince Edward Island, Canada. You can follow him on Twitter, @BrentonDana.
View all posts by Brenton Dickieson →
This entry was posted in Memorable Quotes, Thoughtful Essays and tagged Bible translation, Flintstones, Gay, King James Bible, KJV Only, metrosexual, religion, The Silver Chair. Bookmark the permalink.

15 Responses to We’ll Have a Gay Old Time, or Why New Bible Translations Are Needed