Posted on September 23, 2013 by Brenton Dickieson 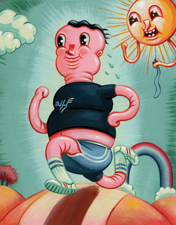 I have received two fan letters in my writing life thus far. I know! Impressive, isn’t it?

I had published a little piece called “On Being Fat and Running” in Geez, a socially-engaged Christian magazine in the tradition of Adbusters. Within a few months, the article got picked up by the Utne Reader, so that my awkward reflections were no longer in the niche Geez market, but were now available to the hundreds of thousands Utne readers. I hit the big time, though I wish it had happened with a less personal, more impressive piece.

The piece caught people’s attention, which was great. I often get personal notes on my writing–the “good job!” kind of digital pat on the back. But this time I got two letters from complete strangers. I’ve got fans! Two of them.

The first fan effused over my work, how personal and well-written and courageous it was. Then she asked me how I got my start in writing and what she might do to further her own writing career. I read the email, and then laughed out loud. What was I supposed to say to her? It was a fluke! I wrote this piece, sent it out on a whim, and then it spun out. What could I tell her?

I told her the truth, and we began a great email discussion about writing resources. She taught me more than I taught here, I am sure.

That was fan #1. Fan #2 told me how great my work was, how courageous I was, and then told me about an absolutely free program on how I can lose weight in only three months.

The fan letters took me by surprise (moreso the first one than the second). I wasn’t expecting any real response, and have come to hate email so much that I certainly didn’t expect anything good to pop out of that inbox. But fan letters can lead to great things. C.S.

Lewis wrote one to Charles Williams over his book, The Place of the Lion, just as Williams was writing to Lewis to congratulate him for his Allegory of Love. The mutual fan letters nearly crossed in the mail and began a lifelong friendship of ideas and stories.

In 1938, Lewis shifted dramatically in his career track. He published a short Science Fiction book, Out of the Silent Planet. As I argue elsewhere, this simple, creative space fantasy is quite a complex theological fiction–a philosophical novel that became widely read and widely reviewed.

As it turns out, most of the reviewers missed the theological or philosophical elements. In response to a fan letter by Sr. Penelope–an Anglican nun who becomes important to Lewis’ career and spiritual life–Lewis jokes that out of sixty reviews, only two picked up some of the key elements which he laced within the pages.

The fan letters from Sr. Penelope and Charles Williams were not the only influential ones. Quickly after he published Out of the Silent Planet, he received two important fan letters.

The first is from Evelyn Underhill, an important British religious writer, whose 1911 book, Mysticism, was phenomenally popular. She read Out of the Silent Planet and sent Lewis a note of thanks, part of which Walter Hooper records in The Collected Letters, vol. 2:

‘May I thank you for the very great pleasure which your remarkable book “Out of the Silent Planet” has given me? It is so seldom that one comes across a writer of sufficient imaginative power to give one a new slant on reality: &amp; this is just what you seem to me to have achieved. And what is more, you have not done it in a solemn &amp; oppressive way but with a delightful combination of beauty, humour &amp; deep seriousness. I enjoyed every bit of it, in spite of starting with a decided prejudice against “voyages to Mars”. I wish you had felt able to report the conversation in which Ransom explained the Christian mysteries to the eldil, but I suppose that would be too much to ask. We should be content with the fact that you have turned “empty space” into heaven!’ (Bodleian Library, MS. Eng. c. 6825, fol. 68)

Lewis was evidently pleased by the letter:

Oct 29th 1938
Dear Madam
Your letter is one of the most surprising and, in a way, alarming honours I have ever had. I have not been for very long a believer and have hitherto regarded the great mystical writers as a man in the foothills regards the glaciers and precipices: to find myself noticed from regions which I scarcely feel qualified to notice is really quite overwhelming. In trying to thank you, I find myself regretting that we have given such an ugly meaning to the word ‘Condescension’ which ought to have remained a beautiful name for a beautiful action.
I am glad you mentioned the substitution of heaven for space as that is my favourite idea in the book. Unhappily I have since learned that it is also the idea which most betrays my scientific ignorance: I have since learned that the rays in interplanetary space, so far from being beneficial, would be mortal to us. However, that, no doubt, is true of Heaven in other senses as well!
Again thanking you very much,
Yours very truly,
C.S. Lewis

This correspondence would be long remembered by Lewis. In response to a later letter by Underhill (Jan 16th, 1941), Lewis wrote:

“Your kind letter about the Silent Planet has not been forgotten and is not likely to be. It was one of the high lights of my literary life.”

Another lifelong friend was made through a fan letter, though the writer was a student at Oxford and sat in Lewis’ lectures. The letter-writer, Roger Lancelyn Green, had some good knowledge about SciFi lit, and sent Lewis a note looking for more background to Out of the Silent Planet. I do not have the young student’s letter, but Lewis’ response makes it easy to read the basics of what Green was asking:

Dec. 28th 1938
Thanks for kind letter. I don’t think letters to authors in praise of their works really require apology for they always give pleasure.
You are obviously much better informed than I about this type of literature and the only one I can add to your list is Voyage to Arcturus by David Lyndsay (Methuen) wh. is out of print but a good bookseller will prob. get you a copy for about 5 to 6 shillings. It is entirely on the imaginative and not at all on the scientific wing.
What immediately spurred me to write was Olaf Stapledon’s Last and First Men (Penguin Libr.) and an essay in J. B. S. Haldane’s Possible Worlds both of wh. seemed to take the idea of such travel seriously and to have the desperately immoral outlook wh. I try to pillory in Weston. I like the whole interplanetary idea as a mythology and simply wished to conquer for my own (Christian) pt. of view what has always hitherto been used by the opposite side. I think Wells’ 1st Men in the Moon the best of the sort I have read. I once tried a Burroughs in a magazine and disliked it. The more astronomy we know the less likely it seems that other planets are inhabited: even Mars has practically no oxygen.
I guessed who you were as soon as you mentioned the lecture. I did mention in it, I think, Kircher’s Iter Celestre, but there is no translation, and it is not v. interesting. There’s also Voltaire’s Micromégas but purely satiric.
Yrs.
C. S. Lewis

We see in these letters Lewis’ increasing humility on the real physics of astronomy. But this letter was important to Lewis for deeper reasons, both literary and personal. Roger Lancelyn Green went on to be an important writer, both as a biographer of important authors–I just found on a friend’s reading table a copy of his Teller of Tales–and as a reteller of great legends like Robin Hood and King Arthur. Green did two biographies of C.S. Lewis, and was part of the Inklings gathering at Oxford.

This letter not only initiated this literary relationship, but began a personal friendship that grew throughout the years. Green was with Lewis near the end of his life. Green and his wife vacationed in Greece with Lewis and Joy Davidman, who had married Lewis as she was dying of cancer. It is a fan letter begun well, and ended in a journey no one could have expected.

It is hard to know what I am recommending to the reader–if anything! But it is, perhaps, a hint of what a fan letter can do in an author’s life. Meanwhile, I have to send my credit card number to that free weight loss program. He is a discerning reader, after all.

“A Pilgrim in Narnia” is a blog project in reading and talking about the work of C.S. Lewis, J.R.R. Tolkien, and the worlds they touched. As a "Faith, Fantasy, and Fiction" blog, we cover topics like children’s literature, apologetics and philosophy, myths and mythology, fantasy, theology, cultural critique, art and writing. This blog includes my thoughts as I read through Lewis and Tolkien and reflect on my own life and culture. In this sense, I am a Pilgrim in Narnia--or Middle Earth, or Fairyland. I am often peeking inside of wardrobes, looking for magic bricks in urban alleys, or rooting through yard sale boxes for old rings. If something here captures your imagination, leave a comment, “like” a post, share with your friends, or sign up to receive Narnian Pilgrim posts in your email box. Brenton Dickieson is a father, husband, friend, university lecturer, and freelance writer from Prince Edward Island, Canada. You can follow him on Twitter, @BrentonDana.
View all posts by Brenton Dickieson →
This entry was posted in Letters, Lewis Biography and tagged C.S. Lewis, Evelyn Underhill, fan letters, fantasy, Geez, Obama, Out of the Silent Planet, Ransom Trilogy, Roger Lancelyn Green, Science Fiction, SciFi, Sr. Penelope, theology, Utne Reader, writing. Bookmark the permalink.