Posted on December 3, 2013 by Brenton Dickieson 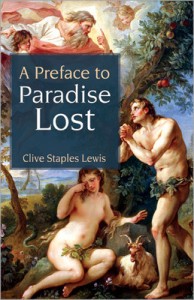 I am reading C.S. Lewis’ A Preface to Paradise Lost for the first time. This is one of Lewis’ early works (1942), and comes out of his lecturing in English Literature. I was struck immediately on the first page by a powerful metaphor for genre–what books do, what kind of book they are. Then Lewis moves on to talk about epic poetry, how strange it seems to us now in our context. In his discussion, he comes up with the idea of  “virgin books.” Check it out.

[The need for this book] is specially urgent in the present age because the kind of poem Milton meant to write is unfamiliar to many readers. He is writing epic poetry which is a species of narrative poetry, and neither the species nor the genus is very well under­ stood at present. The misunderstanding of … narra­tive poetry … I have learned from looking into used copies of our great narrative poems. In them you find often enough a num­ber of not very remarkable lines underscored with pencil in the first two pages, and all the rest of the book virgin.
It is easy to see what has happened. The unfortunate reader has set out expecting ‘good lines’-little ebullient patches of delight­ such as he is accustomed to find in lyrics, and has thought he was finding them in things that took his fancy for accidental reasons during the first five minutes ; after that, finding that the poem cannot really be read in this way, he has given it up. 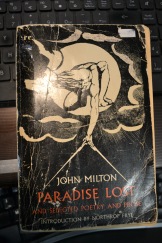 The size of Lewis’ own library is legendary, and some researchers spend their times going through his own marginal notes. He didn’t leave many virgin books. So I thought I would test his theory.

I picked up my copy of John Milton’s Paradise Lost, an ex libris copy from St. Stephen’s University. I no longer remember where I got this copy, but I had originally bought it because it has many of Milton’s other works, including Comus, and has editorial notes by Northrup Frye.

And, indeed, other readers of this particular copy have left trails behind them. There are 3 readers that I know of, though the “date due” slip on the back is empty. I can tell there are 3 readers not just because of the ink colours they used, but by the handwriting. Here are the first few pages: 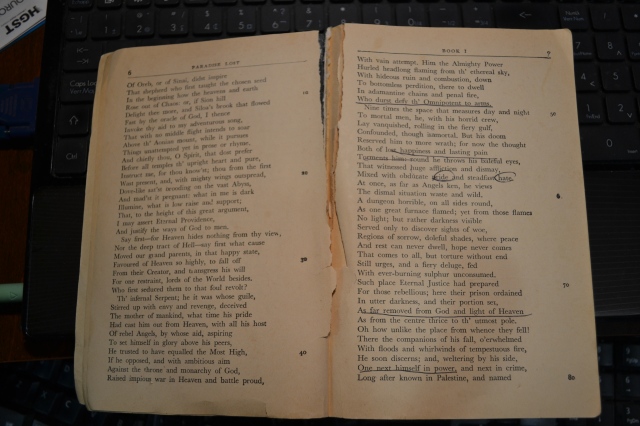 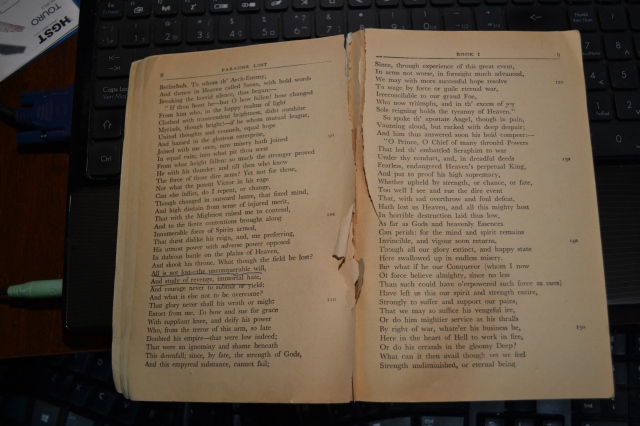 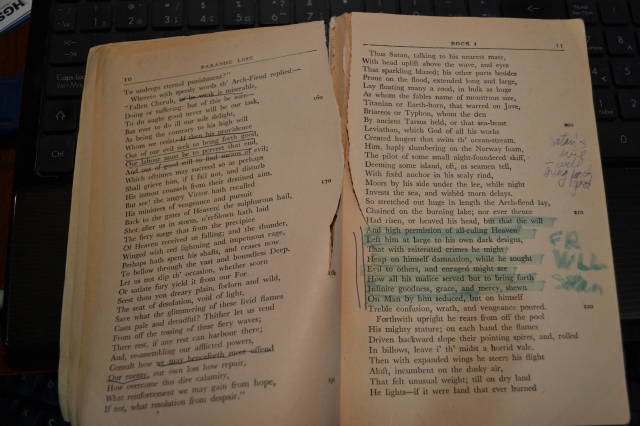 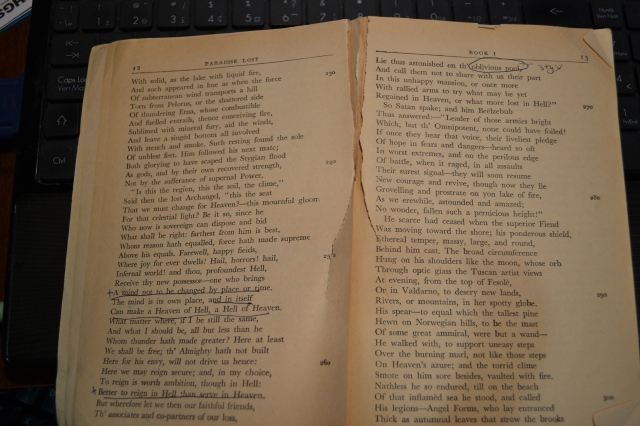 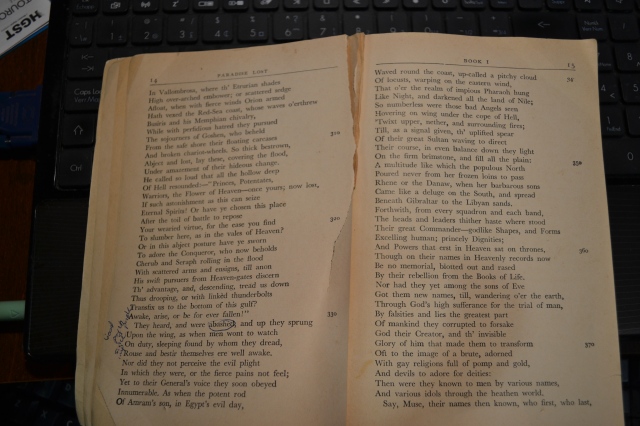 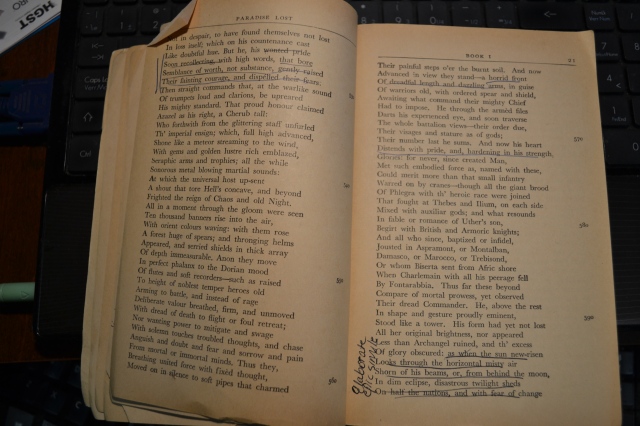 The notes are telling. The Black Ink Reader, as evidenced by this last picture, is a reader who thinks Satan is the “epic hero”–something that Lewis argues against. This reader highlighted a number of great lines, including, “Better to reign in Hell than serve in Heaven,” which you can also get on a t-shirt. Within a few pages, the Black Ink Reader drops off. The other 11 books of Paradise Lost are left virgin. 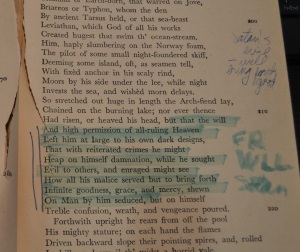 Then there is the Green Highlighter Reader. I detest when people use highlighters, but to each his own. During my days as a student I just saw too many psychology textbooks filled with bright yellow or orange. It has sort of turned me away from the practice altogether.

The Green Highlighter Reader leaves a single mark with a unique hand. This reader has piggy-backed on the Blue Ink Reader (more anon), highlighting what really is a key passage in Paradise Lost:

Had ris’n or heav’d his head, but that the will
And high permission of all-ruling Heaven
Left him at large to his own dark designs,
That with reiterated crimes he might
Heap on himself damnation, while he sought
Evil to others, and enrag’d might see
How all his malice serv’d but to bring forth
Infinite goodness, grace, and mercy shewn
On Man by him seduc’d, but on himself
Treble confusion, wrath and vengeance pour’d.
(Book 1, lines 211-220). 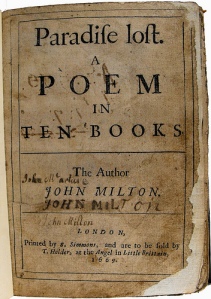 The Green Highlighter Reader is clearly highly critical and astute. He or she has then written in the margin: “FR WLL Stan,” short, probably, for “Farewell Satan.” This is a reader who clearly falls prey to the virgin book scenario that Lewis describes.

My suspicion, then, is that one of the hands that held this copy of Paradise Lost made it through the entire epic. Perhaps it was because the Blue Ink Reader knew that it was an epic and treasured it as such. Or perhaps he or she had to read it for school; there was someone peaking over a shoulder. I simply can’t know.

And I cannot test the theory much further. Most of the epics on my shelf are used, but all of them are virgin books–all pages are left without marks, so sacred they are unread or a least unmarked. I have found 2/3 readers of Milton fit Lewis’ categorization. What do you think? Do readers pick up older genres they don’t understand, mark up a few pages, and then give up?

“A Pilgrim in Narnia” is a blog project in reading and talking about the work of C.S. Lewis, J.R.R. Tolkien, and the worlds they touched. As a "Faith, Fantasy, and Fiction" blog, we cover topics like children’s literature, apologetics and philosophy, myths and mythology, fantasy, theology, cultural critique, art and writing. This blog includes my thoughts as I read through Lewis and Tolkien and reflect on my own life and culture. In this sense, I am a Pilgrim in Narnia--or Middle Earth, or Fairyland. I am often peeking inside of wardrobes, looking for magic bricks in urban alleys, or rooting through yard sale boxes for old rings. If something here captures your imagination, leave a comment, “like” a post, share with your friends, or sign up to receive Narnian Pilgrim posts in your email box. Brenton Dickieson is a father, husband, friend, university lecturer, and freelance writer from Prince Edward Island, Canada. You can follow him on Twitter, @BrentonDana.
View all posts by Brenton Dickieson →
This entry was posted in Lewis' Essays, Reflections and tagged A Preface to Paradise Lost, books, C.S. Lewis, epic poetry, John Milton, literature, narra­tive poetry, Old Books, Paradise Lost, Poetry, virgin books. Bookmark the permalink.