Posted on January 15, 2018 by Brenton Dickieson 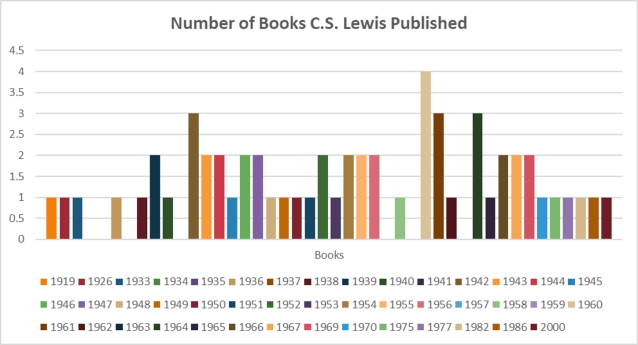 For those who study authors of the past, you will soon discover that the publication lists and bibliography of an author are not always terribly helpful. After all, writing, editing, and publishing a book are stages that can each take years. Knowing something is published in 1822 or 1946 tells us little about the writing process. C.S. Lewis and J.R.R. Tolkien each had books that took nearly two decades to write. Ezra Pound spent more than a half-century on his famous Cantos–carrying the poems through his London period and WWI, through various parts of France and Europe in the 1920s, into an American prison camp, to a treason trial in the U.S., and to a mental ward where he did some of his best work. In his last decade in Italy he finally published the whole, though parts were published at various points between the years of 1917 and 1948. 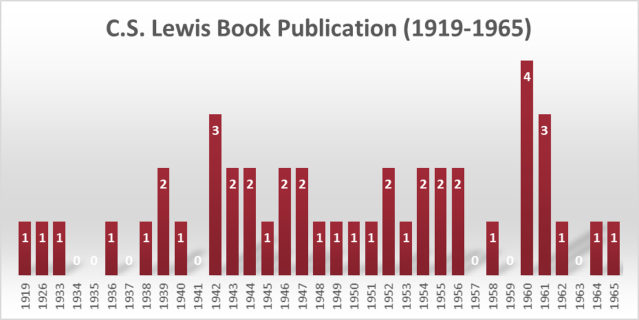 Over the last five years, then, I have developed a habit of speaking about when C.S. Lewis or one of the Inklings wrote a book, rather than when they published it. I haven’t been perfectly consistent with this on the blog, but have generally put the writing period in brackets rather than the publication date.

To do this, I discovered that I was slowly building myself a cheat sheet to help me remember when Lewis was writing a book so that I can connect it with what was going on at the time. The cheat sheet includes completed books and incomplete fragments of what would have been a book. I’ve decided to share this cheat sheet with those of you who are interested. This might save you time or inspire you to make connections between Lewis’ work and his life patterns. And, perversely, I’m hoping to draw more people into the project of reading Lewis chronologically, and have provided resources here, here, and here. 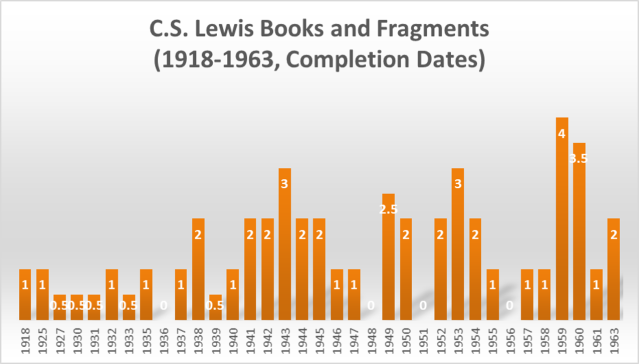 I’m also hoping that in sharing you will be able to point out errors. For example, I probably should put the 1916 “The Quest of Bleheris” on this list as a fragment. Or perhaps if someone is able and interested they could format this into some kind of useful internet tool. Whether to make it better or to use it for yourself, if the excel sheet can be of help, email me: junkola [at] gmail [dot] com.

If you decide to print this off and keep it with your Lewis books-to-read pile, I would encourage you to use it with a basic timeline like the one published by the C.S. Lewis Foundation. Digging deeper, Joel Heck’s “Chronologically Lewis,” now complete after 13 years of work, has all the details you could need if you want to press in on a particular period. Critical to pulling this kind of list together were the three-volume Collected Letters, edited by Walter Hooper, and Hooper’s C.S. Lewis: Companion and Guide (1996). Some of the dates on here were adjusted based on facebook discussion groups, blog posts, and notes in three biographies of Lewis, by Alister McGrath (2013), by George Sayer (1988), and by Roger Lancelyn Green and Walter Hooper (1967). See also critical biographies of the Inklings by Humphrey Carpenter (1978) and by Carol Zaleski and Philip Zaleski (2015), as well as historical work by Diana Pavlac Glyer’s The Company They Keep (2008).

I have left in the fallow years following Lewis’ conversion, but after Lewis found his literary voice in the early 1930s, he was rarely without a book or essay on his desk. A post next week will chase down “The Periods of C.S. Lewis’ Literary Life.”

Note: in copying over the Excel sheet I lost all the formatting, so books are not in italics.

“A Pilgrim in Narnia” is a blog project in reading and talking about the work of C.S. Lewis, J.R.R. Tolkien, and the worlds they touched. As a "Faith, Fantasy, and Fiction" blog, we cover topics like children’s literature, apologetics and philosophy, myths and mythology, fantasy, theology, cultural critique, art and writing. This blog includes my thoughts as I read through Lewis and Tolkien and reflect on my own life and culture. In this sense, I am a Pilgrim in Narnia--or Middle Earth, or Fairyland. I am often peeking inside of wardrobes, looking for magic bricks in urban alleys, or rooting through yard sale boxes for old rings. If something here captures your imagination, leave a comment, “like” a post, share with your friends, or sign up to receive Narnian Pilgrim posts in your email box. Brenton Dickieson is a father, husband, friend, university lecturer, and freelance writer from Prince Edward Island, Canada. You can follow him on Twitter, @BrentonDana.
View all posts by Brenton Dickieson →
This entry was posted in Reflections and tagged Alister McGrath, books, Carol Zaleski and Philip Zaleski, English Literature in the Sixteenth Century, Ezra Pound, Fellowship of the Ring, George Sayer, Humphrey Carpenter, OHEL, Roger Lancelyn Green, The Quest of Bleheris, Walter Hooper, writing. Bookmark the permalink.

13 Responses to My Cheat Sheet of C.S. Lewis’ Writing Schedule