Posted on October 18, 2021 by Brenton Dickieson

At the virtual Mythcon 51 earlier in the fall, there was a good bit of buzz about the Mythopoeic Awards. As readers will know, I pay attention to the awards–so much so that this year they have stimulated a limited series (see Part 1, Part 2, and Part 3) as well as the C.S. Lewis Studies Series. As COVID-19 has delayed on-site conferences–one of the award-winners (a past winner) says in the reception speech, “I wish I was there, in person! No, I really wish I was there in person. I love my garden but I have been in here for a really long time now!”–the awards have been delayed.

However, it also means that the award ceremony is now on Youtube. In this post, I’ve added the award shortlists for each of the four categories, followed by the Award announcements including winner speeches–“I get a little lion statue! Wee!”–and then some details about the awards.

I have already talked about this list, and I am not sharing here my feelings about the award categories where I have a good sense of the field. However, I do want to congratulate each of the shortlisted projects, particularly in the scholarly fields. In the Fantasy Studies category, there was a lot of interest about Anna Vaninskaya’s work at Mythcon. And though I have not read Adrienne Mayor’s Gods and Robots (though I certainly will), Kathryn Hume has been a leader in Fantasy Studies since her 1984 Fantasy and Mimesis, Charul Palmer-Patel’s book really is an elegantly designed and thoughtful study, and I have already admitted that Ebony Elizabeth Thomas‘ The Dark Fantastic is one of the more important studies of the past decade.

In the five Tolkien Studies that made the Inklings Studies shortlist, I find it difficult to complain about any of the projects. John Rateliff has done such important work in The History of the Hobbit, and Verlyn Flieger is a master; thus, a thoughtful and energetic essay collection is certainly a temptation to Tolkienist. John Garth’s The Worlds of J.R.R. Tolkien: The Places That Inspired Middle-earth is brilliant and beautiful and so helpful to readers, and I hope that some visual producer will see the value of the project as a documentary. Oronzo Cilli’s Annotated Checklist of Tolkien’s Library is a helpful resource, and right now I am reading the unusually good John M. Bowers’ Tolkien’s Lost Chaucer. Catherine McIlwaine’s gorgeous book project, Tolkien: Maker of Middle-earth, did not win–and perhaps this is not the best award for this particular book. However, this huge, colourful catalogue of the Bodleian Library Tolkien exhibit is one of my absolute favourite Tolkien resources.

I won’t speak to the fiction, which will take me a decade to get through, given how much of my novel reading is committed to my own peculiar categories of the good (J.K. Rowling, Stephen King, Marilynne Robinson, Frederick Buechner, and a number of Black women sf writers dominating the field), the dead (Tolkien, Lewis, Ursula K. Le Guin, Frank Herbert, L.M. Montgomery, Madeleine L’Engle, Jane Austen, Shakespeare, the classic novel and classic sf), and the pressing (like, what I have to teach this year, what books smart kids in my life are most interested in, challenges like the Hugo 2021 novel finalists, and my failing attempt to follow great Canadian literature). I will, though, remind readers that any Mythopoeic Society member can nominate books, and they will be looking for these nominations in the new year. 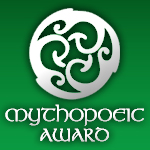 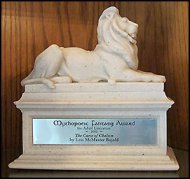 The Mythopoeic Fantasy Award for Adult Literature is given to the fantasy novel, multi-volume, or single-author story collection for adults published during 2019-2020 that best exemplifies the spirit of the Inklings. Books are eligible for two years after publication if selected as a finalist during the first year of eligibility. Books from a series are eligible if they stand on their own; otherwise, the series becomes eligible the year its final volume appears.

The Mythopoeic Fantasy Award for Children’s Literature honors books for beginning readers to age thirteen, in the tradition of The Hobbit or The Chronicles of Narnia. Rules for eligibility are otherwise the same as for the Adult literature award. The question of which award a borderline book is best suited for will be decided by consensus of the committees. Books for mature “Young Adults” may be moved to the Adult literature category.

The Mythopoeic Scholarship Award in Inklings Studies is given to books on Tolkien, Lewis, and/or Williams that make significant contributions to Inklings scholarship. For this award, books first published during the last three years (2018–2020) are eligible, including finalists for previous years.

The Mythopoeic Scholarship Award in Myth and Fantasy Studies is given to scholarly books on other specific authors in the Inklings tradition, or to more general works on the genres of myth and fantasy. The period of eligibility is three years, as for the Inklings Studies award.

“A Pilgrim in Narnia” is a blog project in reading and talking about the work of C.S. Lewis, J.R.R. Tolkien, and the worlds they touched. As a "Faith, Fantasy, and Fiction" blog, we cover topics like children’s literature, apologetics and philosophy, myths and mythology, fantasy, theology, cultural critique, art and writing. This blog includes my thoughts as I read through Lewis and Tolkien and reflect on my own life and culture. In this sense, I am a Pilgrim in Narnia--or Middle Earth, or Fairyland. I am often peeking inside of wardrobes, looking for magic bricks in urban alleys, or rooting through yard sale boxes for old rings. If something here captures your imagination, leave a comment, “like” a post, share with your friends, or sign up to receive Narnian Pilgrim posts in your email box. Brenton Dickieson is a father, husband, friend, university lecturer, and freelance writer from Prince Edward Island, Canada. You can follow him on Twitter, @BrentonDana.
View all posts by Brenton Dickieson →
This entry was posted in News & Links and tagged Bodleian Library, C.S. Lewis, Ebony Elizabeth Thomas, fantasy literature, Frank Herbert, Frederick Buechner, J.K. Rowling, J.R.R. Tolkien, Jane Austen, John Garth, John Rateliff, Kathryn Hume, L.M. Montgomery, Lev Grossman, Madeleine L'Engle, Marilynne Robinson, Mythopoeic Award, Science Fiction, Shakespeare, Ursula K. Le Guin, Verlyn Flieger. Bookmark the permalink.

6 Responses to The 2021 Mythopoeic Awards Winners