Posted on November 16, 2021 by Brenton Dickieson 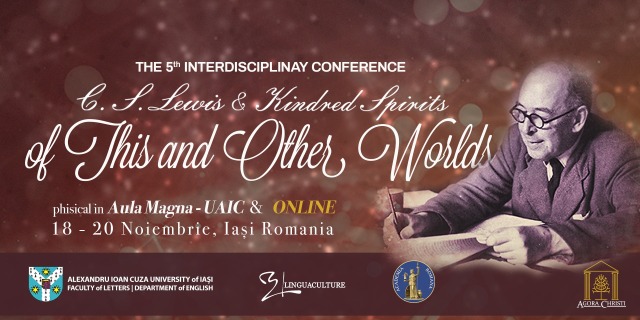 Alas, when I say that “I am speaking in Romania this weekend”–I am, in fact, speaking at this Romanian C.S. Lewis conference–I must admit that am doing so from my desk in Prince Edward Island. While pre-flight check-in is quite easy, I am very sad that I am not with the wonderful scholars of Iași, Romania for their 5th International Interdisciplinary Conference on C.S. Lewis. I enjoyed my spring meeting with the C.S. Lewis & Kindred Spirits Society–a conversation on “Inklings of Imagination” with Malcolm Guite and Kirstin Jeffrey Johnson–and I would dearly love to gather with them in person. 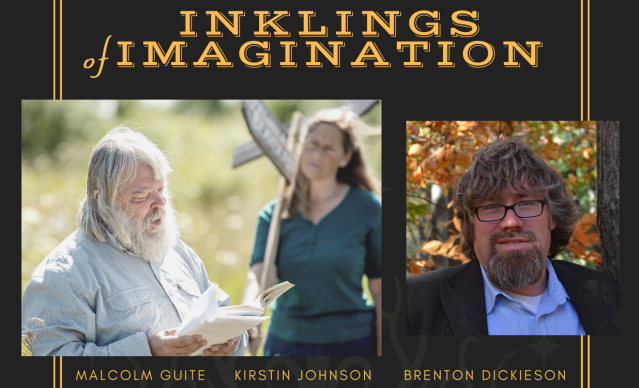 I would like to visit with the scholars I have heard about: the Romanian Academy, the people from Linguaculture journal, students and professors from the Alexandru Ioan Cuza University of Iași, and the folks from the Agora Christi Foundation. The work of linguist and Inklings scholar, Dr. Teodora Ghivirigă (who has written an intriguing paper on Lewis and magic), the intrepid director Dr. Denise Vasiliu (with a PhD on Lewis and spirituality), and Dr. Rodica Albu, with a lifetime of research and the translator of the first signed Romanian version of The Lion, the Witch and the Wardrobe. 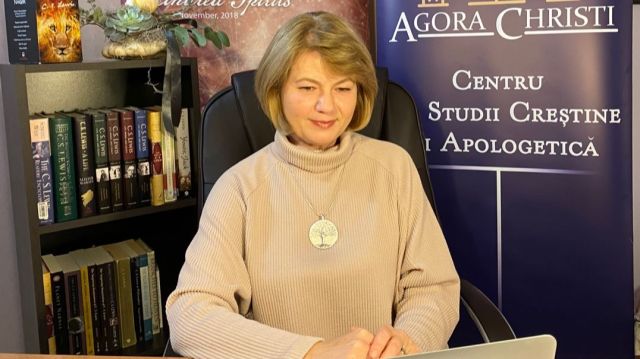 Besides the chance to meet this tremendous team of people and all of the senior and emerging scholars, I am excited by the incredible program of the conference. For scholars of C.S. Lewis, the Inklings, fantasy literature, children’s literature, and linguistics, it is a dream conference. Here are some highlights from the tracks I have chosen:

There will also be some book launches at the conference, including an edited volume by Teodora Ghiviriga and Daniela Vasiliu, C.S. Lewis. His Life and His Heritage, and Romanian transitions of  Lord Dunsany’s The Kith of the Elf Folk (translation by Liliana Bahnă) and Owen Barfield’s Night Operation (translation by Rodica Albu). My own copy of Night Operation was given to me by Owen A. Barfield, the grandson of this “First and Last Inkling,” and Owen will do a talk, “What Owen Barfield Taught the Inklings.” What didn’t he teach the Inklings? You might get a preview at this recent Radix interview here (and it’s worth noting that Radix, a Christian arts and culture magazine, is featuring a number of interviews of scholars on Lewis, the Inklings, and some of the other British Christian writers of that generation, like Dorothy L. Sayers).

As always, I am sad that I have to make choices between sessions, especially since I do not know yet what I will learn from the Eastern European scholars. There are fine-looking keynote talks by James Como and Jerry Root focussing on the theme, C.S. Lewis and Other Worlds), Alan Snyder (on his book, America Discovers C.S. Lewis), Malcolm Guite (on The Voyage of the Dawn Treader, a house favourite), and Romanian scholar Stefan Oltean with a speech I am deeply interested in, “Fictional Realities. A Possible World Perspective.”

I am pleased to be able to connect with some of the leading Western Lewis and Inklings scholars. My own talk is in a panel with Paul Michelson, and I am co-hosting a couple of evening online-only events–Virtual Conference Cafés–with George MacDonald scholar Kirstin Jeffrey Johnson where we get to chat with Joe Ricke (Friday night) and Sørina Higgins (Saturday night). Finally, I am moderating a round table that features some of these leading voices, including Kirstin, Malcolm, Alan, and Jerry–Jerry Root being the only one I haven’t worked with personally, but whose work I’ve followed with interest. He has an epic lecturer’s voice! 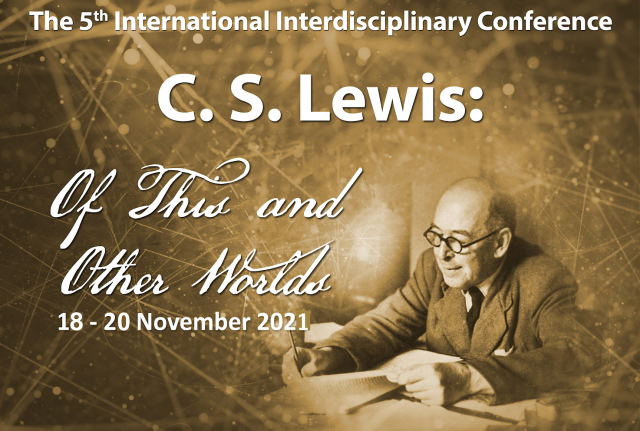 It really is a strong program. I have heard they are wonderful hosts and there is always great food. Though this is perhaps not the saddest part of the continental divide, I feel the loss deeply. But because the conference is offered in a hybrid mode, those of us not live in Europe can still take part meaningfully at pretty low prices:

You will want to note the time differences in the schedule–Romania is 7 hours ahead of Eastern time this week. Check out the poster below, and make sure that you register here.

My own contribution is inspired by the “kindred spirits” theme of the Romanian Society. Anne Shirley (of Green Gables) is always looking for “kindred spirits” in her world. I think we would have to say that “Kindred Spirits” is Anne’s most famous catchphrase. As a reader of L.M. Montgomery–indeed, as a Prince Edward Islander–I was bound to chase down the thread. I have played with some connections before, but this talk gave me a chance to present a single idea. Here is a screenshot from my talk, followed by the abstract and some follow-up resources. 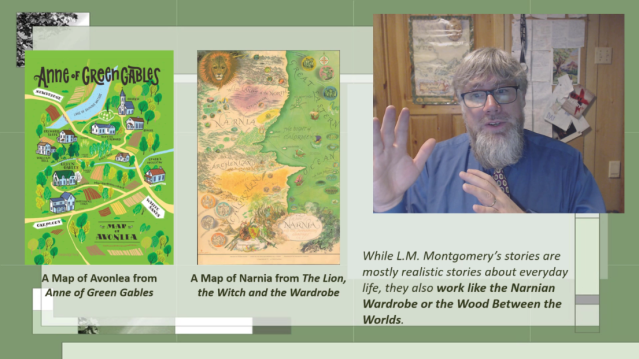 Abstract: “Passports to the Geography of Fairyland: Can C.S. Lewis and L.M. Montgomery be Kindred Spirits?”

While few children’s books have sold more than C.S. Lewis’ 1950 fairy-tale, The Lion, the Witch and the Wardrobe—with perhaps 85,000,000 copies sold—L.M. Montgomery’s 1909 Anne of Green Gables was immediately popular on a global level. With translations within a year of publication, this first Anne book has sold approximately 50,000,000 copies. Is there any connection between these two giant figures in English children’s writing? Lewis and Montgomery wrote in different genres—Lewis as a fantasist, Montgomery as a realist. Lewis came from the British academy while Montgomery remained a rural Canadian writer. Despite their differences, the title of “The C.S. Lewis and Kindred Spirits Society” invites comparison. The vibrant, red-headed orphan of Montgomery’s Anne of Green Gables is a wiry, curious, precocious character who dearly desires to discover a “kindred spirit,” someone who shares her senses of wonder and adventure. Anne’s creator, Lucy Maud Montgomery, once claimed that she possessed “a passport to the geography of fairyland.” In her novels, Anne transforms the mundane world of Prince Edward Island much like C.S. Lewis’ wardrobe invites readers to another world. Despite all their differences, and though they never met or read each other’s books, Montgomery and Lewis are kindred spirits, for they share this imaginative passport to fairy-worlds of transformation and joy.

Some parts of my work to read further on this topic:

If you are interested in the talk but haven’t read the Anne of Green Gables series or the Emily trilogy, beginning with the brilliant Emily of New Moon, you can catch some of the “spirit of Anne” in the trailers to two television productions: the Kevin Sullivan 1980s mini-series that creates the visual imagination of “Anne” for most Canadians of my age, and the darker, artistic, troubling and beautiful recent Anne with an E serial on CBC/Netflix.

And though it sounds a bit maniacal out of context, Anne of Green Gables: The Musical has run for decades at the Confederation Centre of the Arts in Charlottetown, Prince Edward Island (until COVID broke the record run). Here is the “Kindred Spirits” song. In the “MaudCast: The Official Podcast of the L.M. Montgomery Institute,” I have an upcoming episode planned where I interview some “Annes” from the stage. I’m looking forward to it.

Taylor Swift doesn’t help here, I think, as much as I think she’s a brilliant song-writer–and though I don’t think we would want to call Tolkien and Lewis “bosom friends”–here are some “kindred spirit” scenes from the Anne with an E series that captures Anne and Diana’s friendship (though I think Anne Shirley’s truest kindred spirit are those of “the race that knows Joseph” in Anne’s House of Dreams, Leslie Moore in particular). And I would encourage all of you to support the work and mission of the C. S. Lewis & Kindred Spirits Society by becoming a member of the Friends of the CSLKS. Click here to become a member.

“A Pilgrim in Narnia” is a blog project in reading and talking about the work of C.S. Lewis, J.R.R. Tolkien, and the worlds they touched. As a "Faith, Fantasy, and Fiction" blog, we cover topics like children’s literature, apologetics and philosophy, myths and mythology, fantasy, theology, cultural critique, art and writing. This blog includes my thoughts as I read through Lewis and Tolkien and reflect on my own life and culture. In this sense, I am a Pilgrim in Narnia--or Middle Earth, or Fairyland. I am often peeking inside of wardrobes, looking for magic bricks in urban alleys, or rooting through yard sale boxes for old rings. If something here captures your imagination, leave a comment, “like” a post, share with your friends, or sign up to receive Narnian Pilgrim posts in your email box. Brenton Dickieson is a father, husband, friend, university lecturer, and freelance writer from Prince Edward Island, Canada. You can follow him on Twitter, @BrentonDana.
View all posts by Brenton Dickieson →
This entry was posted in Reflections and tagged Alan Snyder, Anne of Green Gables, Anne With an E, Anne's House of Dreams, C.S. Lewis, C.S. Lewis & Kindred Spirits Society, Dorothy L. Sayers, Emily of New Moon, J.R.R. Tolkien, James Como, Jerry Root, Kirstin Jeffrey Johnson, L.M. Montgomery, Malcolm Guite, owen barfield, Rainbow Valley, That Hideous Strength, The Inklings, The Lion, The Screwtape Letters, the Witch and the Wardrobe. Bookmark the permalink.