Posted on April 8, 2022 by Brenton Dickieson

I am very pleased to be speaking tonight at the New York C.S. Lewis Society, the world’s oldest active society for sharing the enjoyment and considering the impact of C.S. Lewis‘ life and works. The New York C.S. Lewis Society was founded in 1969, six years after Lewis passed away. A quick trip to the webpage will give you a sense of their remarkable contribution. Besides monthly meetings, they also produce CSL: The Bulletin of the New York C.S. Lewis Society–a society newsletter that never fails to provide enjoyment and profit for the reader. In each issue, you will find news, reviews, and book notes, but also an academic essay and some occasional features, like Dale Nelson–who has contributed from time to time on A Pilgrim in Narnia–and his “Jack and the Bookshelf” series (now numbering into the 50s in number). Although I have been able to purchase the back issues of CSL that I need for research, over the years, I have been gifted a handful of old copies of the Bulletin. I treasure these with my old scattered issues of Mythlore and The Canadian C.S. Lewis Society Journal. 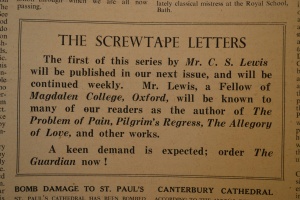 Thus, you can understand why I have confessed that I had been hoping to one day speak to this group.

My last visit to New York was to study the manuscript of The Screwtape Letters in the Berg Collection at the New York Public Library (the lion library in NYC, or the Ghostbusters library for folks from the ’80s) and the original print run of Screwtape in The Guardian at the General Theological Seminary archive. However, that visit was in August, when the society has a hiatus.

So while I hope to gather with these great folk in person at some point soon, for now, I am pleased to be able to share some of my research on C.S. Lewis’ first attempt at prose, his 19,000-word incomplete story, “The Quest of Bleheris,” which he wrote when he was 17.

Below you can find the New York C.S. Lewis Society announcement from Facebook. Readers might also be interested in next month’s NYCSL talk by founding member of the society, James Como, and his new book, Mystical Perelandra: My Lifelong Reading of C.S. Lewis and His Favorite Book. Here is the blurb I wrote for Como’s unusual and provocative Perelandra study, which should be out by the end of the month: 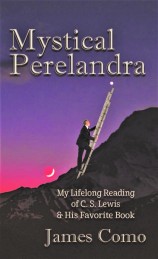 “In Mystical Perelandra, Como draws us into the mysterious heart of the reader’s experience, living within rather than merely analyzing Lewis’ literary vision. The result is alchemical, poetic, and mercurial, a narrative spiritual theology where we imbibe the transcendent nature of Ransom’s planetary journey through Como’s imaginative, sacramental, life-integrated, mystical experience as a reader. And we are all the richer for his efforts. Como’s reflections on Perelandra transport us, like Ransom, to a world of myth and meaning much greater than a book.”

The Literary Past and Future in C.S. Lewis’ “The Quest of Bleheris”

This Friday, Brenton Dickieson will be speaking about C.S. Lewis’s first attempt at a novel, “The Quest of Bleheris.” Though it was only available in an archive in the decades following its composition in 1916, the full text is now available in the 2020 version of Sehnsucht: The C. S. Lewis Journal: Volume 14, 2020. The full text is about 19,000 words, and though incomplete, this teenage chivalric tale by C.S. Lewis is worth reading.

Dr. Brenton Dickieson is the author of more than 1,300 articles, blog posts, essays, and reviews, and is the curator of aPilgrimInNarnia.com, which explores the intersections of faith, fantasy, and fiction. Brenton works primarily as a theologian of literature, with a Master’s degree from Regent College and a PhD from the University of Chester. Brenton is currently an Associate Professor in Applied Communications, Leadership, and Culture at the University of Prince Edward Island, Adjunct Instructor in Literature at The King’s College (New York City), Lecturer in Theology and Literature at Maritime Christian College, Distance Education Instructor in Spiritual Theology at Regent College, and Lecturer and Preceptor in Signum University’s M.A. in Imaginative Literature program. Brenton is under contract with Oxford University Press for his forthcoming book, The Shape of the Cross in C.S. Lewis’s Narrative Spiritual Theology. Brenton lives in beautiful Prince Edward Island with his superstar kindergarten teacher wife, Kerry, and their teenage son, Nicolas, a singer-songwriter.

Follow the link for information on how to join the Zoom meeting on April 8 at 7:30 p.m: http://www.nycslsociety.com/meetings

“A Pilgrim in Narnia” is a blog project in reading and talking about the work of C.S. Lewis, J.R.R. Tolkien, and the worlds they touched. As a "Faith, Fantasy, and Fiction" blog, we cover topics like children’s literature, apologetics and philosophy, myths and mythology, fantasy, theology, cultural critique, art and writing. This blog includes my thoughts as I read through Lewis and Tolkien and reflect on my own life and culture. In this sense, I am a Pilgrim in Narnia--or Middle Earth, or Fairyland. I am often peeking inside of wardrobes, looking for magic bricks in urban alleys, or rooting through yard sale boxes for old rings. If something here captures your imagination, leave a comment, “like” a post, share with your friends, or sign up to receive Narnian Pilgrim posts in your email box. Brenton Dickieson is a father, husband, friend, university lecturer, and freelance writer from Prince Edward Island, Canada. You can follow him on Twitter, @BrentonDana.
View all posts by Brenton Dickieson →
This entry was posted in News & Links, Original Research and tagged C.S. Lewis, Ghostbusters, James Como, Mystical Perelandra, New York C.S. Lewis Society, New York Public Library, Perelandra, The Quest of Bleheris, The Screwtape Letters. Bookmark the permalink.