The Inklings and King Arthur: Selfies and News

Since the first call for chapters for The Inklings and King Arthur, this not-so-little book has been on its own adventure. Conference panels, keynote talks, digital round-table discussions, and crowd-sourced funding were all part of a long editorial and publication journey, shepherded all the way by editor Sørina Higgins. The result is a rigorous examination of the theological, literary, historical, and linguistic implications of the Arthurian writings of all the major Inklings: C.S. Lewis, J.R.R. Tolkien, Charles Williams, and Owen Barfield. I was pleased to provide one of the chapters, where I used the opportunity to test out some theory stuff I am working on. Specifically, I wrote about how Lewis brings various fictional worlds together in That Hideous Strength (Lewis’ only overt Arthurian novel, and one of the few Inklings pieces of Arthurian fiction to be published when it was written).

While it is not a great surprise to me, the book has been received well. Philip Jenkins has a nice review on Patheos. Folks were talking about it at the recent C.S. Lewis & Friends conference (there’s a picture of me somewhere describing the book badly). Researchers are using it and there is a great social media feeling about it.

And, news of news, it has been shortlisted for the Mythopoeic Scholarship Award in Inklings Studies! This prize is given to books on J.R.R. Tolkien, C.S. Lewis, and/or Charles Williams that makes significant contributions to Inklings scholarship. Check out editor Sørina Higgins’ release here to see the fine company the I&A book is joining. I’d love to be going to Mythcon in Atlanta this year.

Well, my copy of the book finally came! It actually arrived while I was doing archival work at the Marion E. Wade Center in Wheaton. I thought the address tag was so cool–that’s a powerful c/o on the label–I took a picture of it on Charles Williams’ trunk.

If any artifact were to have some degree of power it would come from Charles Williams. However, while you are at the Wade it is hard to resist the English garden, cottagy, hobbitish nature of the world of stories of letters that they made in this idyllic American town. Here I am doing my book selfie in front of the (probably imported) Narnian lamppost at the Wade:

And inside the Wade there is the Wardrobe–the Wardrobe, I’m told, the Lewis family piece that may have inspired that long-sought-for gateway to Narnia: 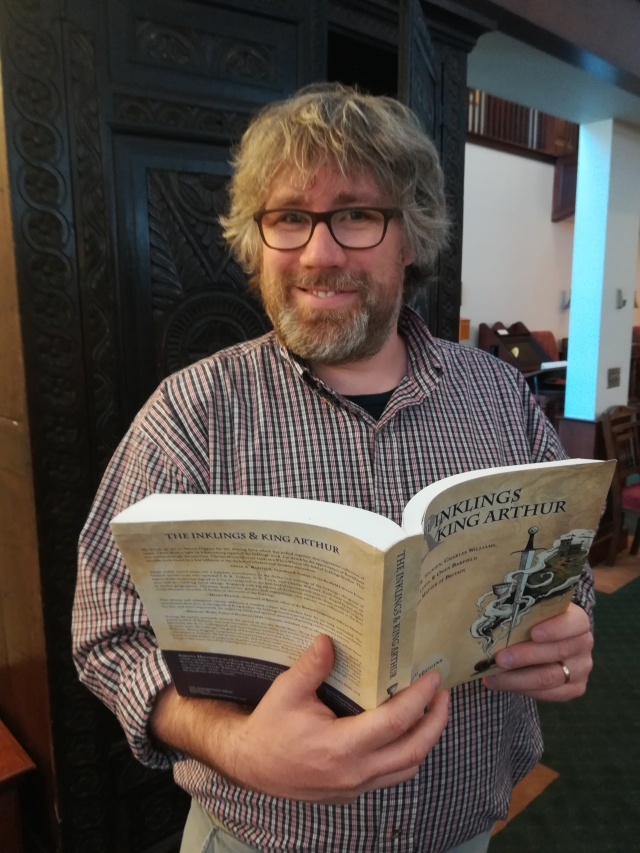 Have you taken a selfie with your copy and hashtagged it #InklingsandArthur? Please do so. The book has sold well, so make sure you grab your copy from your local bookseller and request that your library order it in. As an academic book it is cheap, but if the price is still high, I’d encourage you to look at the kindle version, which is $10 or less in most places. Bloggers, make sure you share your thoughts with the world and watch for academic journal reviews to start appearing later this year.

To supplement the book, there is also an extensive Inklings and Arthur series, hosted here on A Pilgrim in Narnia. The series includes authors and artists from the collection, as well as some other friends of the blog:

Post #1: “The Launch of The Inklings and King Arthur” by blog host and C.S. Lewis scholar Brenton Dickieson

Post #3: “The Argument Continues: Late 20th Century Christian and Pagan Depictions of Arthur and the Grail” by Suzanne Bray, professor of British literature and vivilisation

Post #4: “A Personal Reflection on Logres and The Matter of Britain” by Stephen Winter, Anglican minister and Tolkienist

Post #5: “‘The Name is Against Them’: C.S. Lewis and the Problem of Arthur” by Gabriel Schenk, Arthurian scholar at Signum University

Post #6: “An ‘Easy to Read’ Modern Arthurian Epic” by Dale Nelson, academic and columnist for CSL

Post #10: “Arthurian Literature and the Old Everyman’s Library” by Dale Nelson, academic and columnist for CSL

Post #13: “Thor: Ragnarok and C.S. Lewis’ Mythic Passions” by Josiah Peterson, teacher in “The Rhetoric of C.S. Lewis” at The King’s College in New York

Here are a few other Arthur-related posts on A Pilgrim in Narnia:

“A Pilgrim in Narnia” is a blog project in reading and talking about the work of C.S. Lewis, J.R.R. Tolkien, and the worlds they touched. As a "Faith, Fantasy, and Fiction" blog, we cover topics like children’s literature, apologetics and philosophy, myths and mythology, fantasy, theology, cultural critique, art and writing. This blog includes my thoughts as I read through Lewis and Tolkien and reflect on my own life and culture. In this sense, I am a Pilgrim in Narnia--or Middle Earth, or Fairyland. I am often peeking inside of wardrobes, looking for magic bricks in urban alleys, or rooting through yard sale boxes for old rings. If something here captures your imagination, leave a comment, “like” a post, share with your friends, or sign up to receive Narnian Pilgrim posts in your email box. Brenton Dickieson is a father, husband, friend, university lecturer, and freelance writer from Prince Edward Island, Canada. You can follow him on Twitter, @BrentonDana.
View all posts by Brenton Dickieson →
This entry was posted in News & Links, Original Research and tagged Arthuriana, C.S. Lewis, Charles Williams, Inklings, Inklings and King Arthur, J.R.R. Tolkien, Marion E. Wade Center, Mythcon, Mythopoeic Award, owen barfield, research, That Hideous Strength. Bookmark the permalink.

15 Responses to The Inklings and King Arthur: Selfies and News